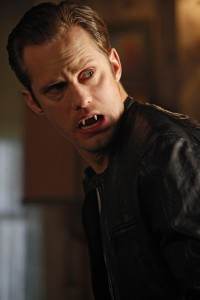 A sub-par and rather melodramatic episode until its final ten minutes, 3.08 went out with a bang.

That long-awaited bang, of course, was between Sookie (Anna Paquin) and Bill (Stephen Moyer). But all that animalistic thrusting and broken furniture couldn’t really make up for the silliness that kept them apart to begin with. Hopefully, that’s the end of the “I love you so much that I have to protect you by letting you go” clichÃ© plot which was never believable nor really interesting to begin with, given that we knew it had to end up with them shagging on the floor.

There certainly was quite a bit of bloody weeping in 3.08. Perhaps the most heartbreaking was Jessica’s (Deborah Ann Woll) plea to Bill not to be left alone. This was followed by a Matrix-esque training session in which Bill taught Jessica how to be a werewolf slaying bad-ass. Hot.

But there was a lot of repetitive and boring dialog spliced throughout. Tara (Rutina Wesley) is back to having another annoying nervous breakdown. And just when we thought they might give her something interesting to do besides freak out. Sookie and Alcide (Joe Manganiello) stripped each other nekkid with their eyes (nothing says “vampire rebound” quite like hooking up with werewolf’s next top model). Arlene (Carrie Preston) had a bad dream. Thalbot (Theo Alexander) whined. Broke things. Jason (Rywan Kwanten) forgot everything he learned last season about hating on vampires. It’s as if they were killing time until they could get to the humping.

The one interesting development was the hint of things to come for Lafayette (Nelson Ellis). Could his “power” be the same fairy-based DNA as Sookie? Or would this be far too obvious and perhaps even worse, one of the worst puns in TV history? Let’s hope it’s something we haven’t seen yet.

Besides the super intense girl fight between Sookie and Debbit (Brit Morgan), the true highlight of this episode was Eric (Alexandar Skarsgard). His manipulations to umm, take Thalbot from behind, were pure genius. Skarsgard did so much in these scenes with his facial expressions, turning on the vengeance eyes in a blink. And the moment of Thalbot’s demise was so well shot and so purely evil and disturbing…and sad. Poor Thalbot. All he wanted was a little love.

3.08 also scores some vampire mythology points for incorporating the old “you can’t come in unless you’re invited” rule on Russell (Denis O’Hare). Here’s one of the oldest, strongest vampires in history, one not afraid to lop off the Magister’s head…and yet he’s afraid of a doorway. Russell has now become, by far, True Blood’s greatest villain to date (silver spurs!). With all the wild vampire deaths so far this season, the writers are going to have a real challenge in coming up with a fitting demise for Russell. One can only hope that day never comes.

Best Worst Line: “There’s a werewoman in your study.”

Most Disturbing Moment: Tara and Sookie sunbathing as if they were on spring break. Nothing says “I just survived a vampire bloodbath” like a good tan.