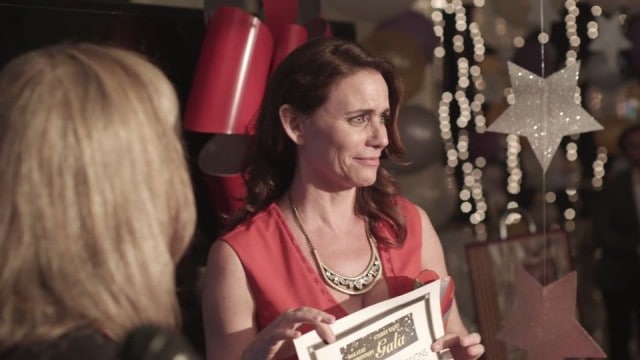 The familiarity in routines is often more comforting than practical, and in Transparent, spiritual rituals and family affairs both fall under this balloon of “routine,” even though they are hardly anything but. If there’s a pattern forming in the first half of Transparent‘s second season, it’s beginning to frame itself around Ali’s shifting sexuality, attempting to dig into her own past as she tries to face her uncertain future. And all around her, the members of the Pfefferman clan are throwing themselves headfirst into the routines and behaviors of the past they expect to find comfort in; and of course, they all come up feeling as lost and empty as they did before.

The most obvious places these stories take hold is with Shelley and Sarah, two women trying to drown themselves in their former lives to try and find new directions. After ghosting through her own house, Sarah spends both of these episodes struggling to maintain her sanity as a single parent, unable to maintain her very fragile grip on her emotions as she tries to toss herself into the deep end of involved parenting: her ability to “compartmentalize her life” has completely fallen apart, something she tries to attribute as more of a choice to live a free-wheeling lifestyle than it is a byproduct of her attempts to take control back of her life. And boy, does Amy Landecker have a field day with the performance, shifting Sarah from angry to disillusioned to terrified on a moment’s notice, while still maintaining the detached veneer Sarah’s trying to disguise her severe anxiety with (that, or she’s just so in shock at the state of her life she’s become numb – both very real possibilities).

Shelley’s attempts to rebuild her marriage with Maura have gone about as well. While Sarah finds herself overwhelmed by the old routines of her life as a mother, Shelley revels in the opportunity to live her old life again, so concerned with being Maura’s partner that her own identity begins to fall by the wayside. She’s become complacent, indecisive, and passive, and Maura can feel it, the dissonance in the casual conversations they have after dinner more than evidence enough that their old routines, the ones they’ve found so much solace in, no longer have any effect on their lives, unable to hide the obvious complications they’re all avoiding.

Of course, there’s no better example of that than Josh’s story, a depressing thread that runs through both of these episodes, centering itself mostly on Raquel’s anxiety with the new “family” she’s been handed to her. Of the many stories playing out in these two half-hours, Josh’s arc is easily the most fascinating, and devastating: here is a man trying to escape the habits and patterns of his past, only to be buried by them over and over again. After finding out he fathered a child two decades ago (by Rita, the babysitter that Raquel so eloquently notes molested him, even if they were in “love”), Josh has tried to do the ‘right’ thing, putting together a patchwork home and family for him to become a part of.

Except Raquel wanted nothing to do with inheriting a family as she tried to build one, especially as the one she’s trying to build grows darker and darker. The Pfeffermans’ penchant for secrets hits with devastating effect when an annoyed Maura points out to Colton’s hyper-religious foster parents that everyone but Josh knew about Colton, and that Maura and Shelley made a sizable contribution to her church, and to help pay her medical bills. They all but hid Josh’s child from him, in the hopes of not “ruining” his life – and instead, allowed their son to live outside the bounds of reality for another two decades, creating the man we met back in the pilot, who slept with the young talent he employed, and generally didn’t give a crap about the well-being of anyone else in his family.

Josh’s 180 since the beginning of Season 1 is impressive: not only has it been subtle, but it comes with the same affable positives and self-serving negatives any Pfefferman decision has. He wants to show Raquel he’s serious about building a life together; but he still hasn’t proposed to her, and he also hasn’t taken into consideration what the kid he already has is going to need in the next year (he wants Colton to live with him, but is he ready for college applications and SAT prep? I think not). He’s definitely trying to mature, but the reasons for that are conflicted, revealing the ever-important struggle between the needs of self, and the needs of others, the ultimate dichotomy between the idea of individual vs. that of family. But none of it fits: Colton is clearly Christian (with parents very dismissive of the Jewish faith), Raquel is obviously overwhelmed, and Josh is alarmingly under prepared. And what that all makes for is as uncomfortable as it is revelatory, leading to the waking nightmare that is “Mee-Maw” once Maura’s accidentally crashed the party (to find old pictures she wants regendered, further clouding the idea of family and memory, and what the “truth” of the past really is).

Of the two episodes, “Mee-Maw” certainly appears to hold more keys to where the season is going, as the sexuality of its characters begins to take center stage – in one scene, Maura’s asked by her hormone doctor if she’s a “top or bottom” and if she’s going to want full gender reassignment surgery – right next to the various faiths each subscribe to (some religious, some odd rituals lesbians do to the moon to celebrate what they’ve “hunted” in the last year). Along with the normal exploration of character through the lens of family and religion Transparent always offers, Season 2 looks to be digger a little deeper into the history of the Pfeffermans (Ali’s education and Grandma Rose being a big part of this), as it pushes them forward into new, more complicated situations than before. And yet, it still maintains that intense focus on the beauty (and self-indulgence) of life’s journey, another reminder why Transparent is such a fascinating, layered show worthy of every single award it gets lauded with.