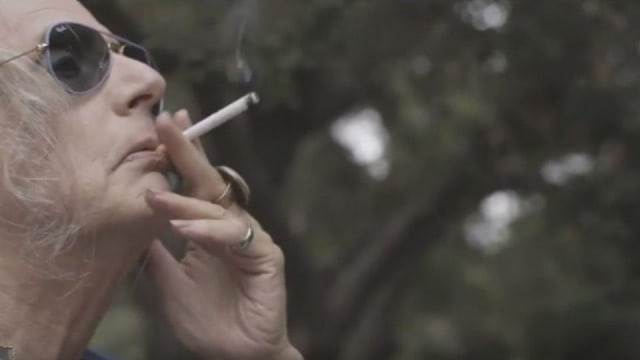 Coming to terms with our past selves and lives is such a weird, complex concept to tackle on a television show. How does one depict the reconciliation of self, a discussion that’s often long, silent, and unbearably difficult? Establishing how one person’s attempts to change themselves ripple through a family is the easy part; depicting the subtle expressions that come with the internal realizations and declarations is something entirely different, even with such a simple, physical manifestation of the idea in Maura’s ever-evolving feminine appearance. Transparent‘s ability to convey that through every level of production is what makes it such a fascinating, emotionally draining study: as these two episodes show, when Transparent reaches for something universally personal inside all of us, it’s as powerful as anything on television.

The best example of this in “Flicky-Flicky Thump Thump,” a half hour full of delusional characters, is poor Shelley Pfefferman, whose love for her former husband grows more and more complicated with every day. She’s trying to support his transition, and yet old attractions and feelings remain, ones she’s compelled to think will help bring her and Maura back together. Her increasingly desperate attempts to appeal to Maura in the ways she did to Mort really set the stage for the two episodes, quietly demonstrating the excitement, the horror, and the allure of pursuing that’s not really new, but very much clouded by the past.

Although Shelley doesn’t appear in “New World Coming,” her behavior in “Flicky-Flicky” weighs heavy, as the Pfefferman crew try on new identities, thinking they’ll be completely absolved of the life and decisions they once made within them. Their new lives are an adjustment, of course – and like Maura learning to say “yas, b**ch,” it’s often an awkward, forced one – and lead to increasingly horrid moments in “New World Coming,” be it Raquel’s lack of faith in Josh’s ability to mature, Ali’s tryst with Syd that is going to lead to heartbreak, or Sarah’s presence as a ghost in her old home, unable to find any new direction to bring any semblance of color back into her life (though as we see with Sarah, any color she finds she makes an absolute freaking mess of). Tammy’s drunken rant through the band’s opening song in “Flicky” is just a harbinger of things to come, and though “New World Coming” still retains all the hope and self-discovery of Season 1, there’s an ominous tint that everything here is on the verge of going horribly wrong, if it hasn’t already. However, before any of the Pfeffermans have realized it, it may be too late to get back what they’ve held dear for so long.

This idea, of course, leaks beyond the personal lives of the Pfeffermans; while Josh tries to assimilate himself into being a responsible, useful band manager – and ends up talking about how he should propose to Raquel, employing the help of teenagers on how to do it (this is after he recants his high school sexual conquests to his son) – Maura tries to help Ali find her way into the upper echelon of California post-grad education, only to run smack into Mort’s old promiscuity. Leslie, a poet and professor on campus (now the head of the “gender studies” department, a title she hates), recants stories to Maura about how she was held back by Mort and his board of sycophants, accepting male applicants into their advanced programs while letting the “radical feminists” and women in general sit on the sidelines, save for those that garnered their attraction.

Maura, now identifying with the female experience, is horrified by her former behavior; she has to come to terms with the idea that Mort hurt someone’s feelings, in a way that Maura can’t possibly fix. And yet, she continues to try and do the same thing with her own family, using her new identity as a way to try and reconcile with the children who grew to resent her (along with the rest of her family; Grandma Rose is mentioned again by Ali in this episode), just as Josh is trying to do with Colton and Raquel, and as Ali is trying to do with Syd. Who we were is often just as important as who we are, especially when we allow the shadows of our old selves to follow us around, and with every character on Transparent sticking themselves in identity purgatory, the results only get more awkward, uncomfortable, and, of course, emotionally resonant.

Transparent is off to a flying start with the first trio of episodes in its second season. While it’s backed away slightly from Maura’s experience as a focal point, her journey still serves as our guiding narrative and thematic foundation for each episode. And with that newfound room to explore, Transparent has reinforced the amazing collage of characters and experiences it has created in the space of 13 episodes, a world as thematically rich as any on television. “Flicky-Flick Thump Thump” and “New World Coming” certainly aren’t the flashiest or most dramatic episodes of Transparent, but their versatility (and by the same token, universality) are perfect examples of why it’s such a challenging – and rewarding – half hour of television.