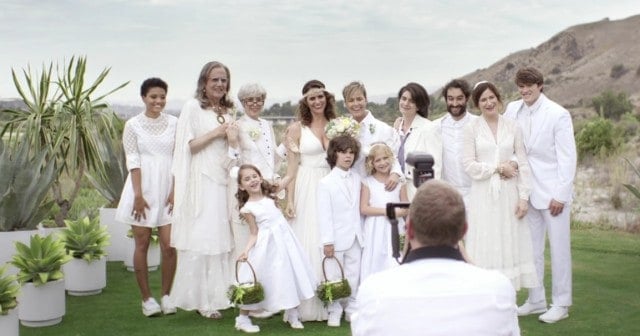 It’s fitting that Transparent‘s second season opens with a family affair. After closing its first season out with an intimate dinner in a quiet room, “Kina Hora” opens at the massive Pfefferman/Cashman wedding, with every single person dressed in white and bathed in sunlight. And it does with a majestic opening shot of the Pfefferman family picture, the various voices of the family overlapping each other as a single photographer and wedding planner try to briefly contain the chaos long enough to snap a few photos. Building off that, “Kina Hora” is an exceptional opening episode, doubling down on the themes of identity, family, and privilege established in the series’ critically-lauded first season, opening and closing with evocative, moving shots of where Transparent has been, and could be headed.

The arc of “Kina Hora” is fairly predictable: we knew last season Sarah’s affair with Tammy wasn’t going to end well, and it’s no surprise it happens on their wedding day, Sarah’s panic kicking in and reminding her how much she doesn’t want to settle down with her old college fling. Inspired by her family, she decides to take the leap – and immediately regrets it, as her wedding day passes by in a flash of words, images, and anxiety, captured beautifully by the choppy cinematography, cutting through a number of increasingly dramatic images and moments, stopping only to focus on Sarah’s growing terror with the mistake she’s about to make.

And yet, “Kina Hora” isn’t solely focused on Sarah’s evolving fear. As the four-minute opening shot suggests, Transparent is a melange of interesting, unique character stories tied to the conventional themes of family dramas and Jewish comedies. Josh, who is just getting used to being a father, is becoming a father “for real,” having knocked up the family rabbi (which means more Kathryn Hahn this season; yay!); Maura continues to struggle with the conflicts of Mort’s life, taking the form of a very bitter sister; and Ali is going back to school, but is still searching for direction. Each one of these stories, part of Transparent‘s carefully cultivated palette of narratives, gets their moment in the spotlight in “Kina Hora” – and yet, the episode is larger than that, touching on everything from the everyday frustrations transgender people face (the photographer calls Maura “sir” at one point during the photograph) to the awkward conversations that transpire at every wedding (“What are you doing with your life?” is my personal favorite).

Overarching these stories, of course, is the central dichotomy of the series: the Pfeffermans’ selfishness, and how that comes into direct conflict with their stated ideals of always being a family. We can see how inclusive they are, openly inviting everyone into the family picture and springing into action when someone in their family needs their support (how Josh responds to his sister’s breakdown is particularly moving, considering what an a**hat he can be); but on the other side of the coin, we can see how bitter and isolated Maura is, constantly focusing on herself and “her journey,” and never taking into consideration the mess she left behind when she abandoned Mort and everything that went with it.

Closing with another powerful shot, isolating the various couples of Transparent and observing their current states at the end of the wedding night, “Kina Hora” encapsulates the conflicting mosaic of hope, bitterness, and despair that defines the lives of every human being, straight, gay, transgender, or otherwise. Transparent is the rare show solely focused on telling the stories of very specific, layered individuals, while never losing the universality of its message. Family and life are complicated, and Transparent never backs away from the nuances of either, even as it tells niche stories about a traditional Jewish family coming back together in a modern world. “Kina Hora,” with its large scope and intense focus, may just be the best hour of Transparent we’ve seen yet, setting the stage wonderfully for the second season when it arrives on Amazon on Friday. I know I can’t wait.