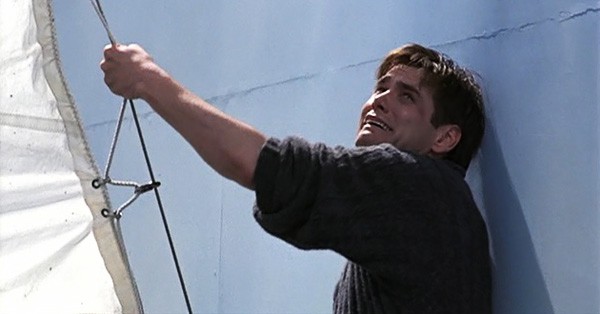 Jim Carrey is one actor that a lot of people didn’t think would ever get serious, as he seemed to always be stuck in one funny scene after another. That was great and all, his life seemed to be a long line of comedies that never seemed to end, but it wasn’t much in the way of being a fully developed act. Eventually his comedy started getting old since he did the same thing over and over and didn’t tend to change it up at all. But then he did something that blew everyone away, and it’s something he’s done before, but people just barely noticed since they focused so much on him talking out of his butt and being a general goof on camera. He got serious finally, and showed that he has something more to offer than his funnier side. Jim let everyone in just a bit and became a well-developed actor that showed he knew just how to pour on the drama when it was needed.

It’s just kind of odd that no one noticed these moments during his comedic performances.

Truman has no idea that he’s the star of a show that was begun before he could even walk, in fact before he was even aware of anything at all. Since then his world was carefully crafted to keep him under wraps and to quell his more creative urges to travel and see the world. He’s been so pent up for so long that even without a few slips here and there it might have happened that he would finally push his limits to the breaking point.

Being someone you’re not is a dangerous and sometimes heart-rending decision that doesn’t just affect the individual, but everyone that knows them. When Peter pretends to be Luke however he does more good in this new life than he ever did in his old one. Even when he’s found out and is eventually cleared of being a communist the town of Lawson welcomes him home, proud to call him one of their own.

3. Eternal Sunshine of the Spotless Mind

Some people would be glad to be rid of the ill memories that tend to stain a good relationship but forget that in order to forget one thing you usually need to forget everything, which includes the good memories. Otherwise everything sours after a while and you’re left with nothing more than resentment and bitterness that you don’t understand. The memories we make, good or bad, are necessary to keep who we are.

Mania comes in all forms. This was the third time I’d seen Carrey get serious and the first time in a long time that he starred in a thriller that was anything but funny. There was no comedy in this movie, at least not intentionally. He went from being a rather average dog catcher to a man whose life was falling apart in front of his eyes because of something he’d done long ago and forgotten.

Some people called Andy Kaufman a genius, others called him wildly unbalanced. The truth of the man was that he was  revolutionary in a time when such a thing was valued but not completely understood. His legend has since dulled only slightly but this movie was widely criticized for how his life was shown.

Jim Carrey can do serious, he’s got the chops to pull it off.