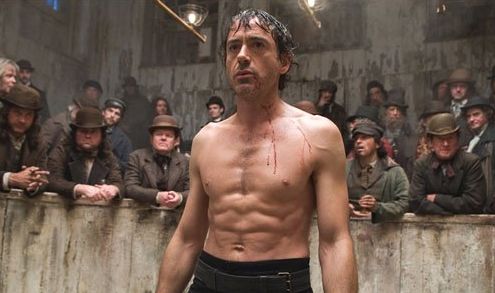 It’s hard to think of Robert Downey Jr. in terms of being a fighter when it comes to his earlier films. Really he starred in more dramas and comedies than he did films where his fighting prowess was brought into play. In fact there’s just one film I could think of and it’s on this list. As he got older and was cast in the role of Tony Stark however his fighting scenes began to add up as he took on the position of one of the most important figures in the MCU. As the first to really be introduced with any zeal he took on the responsibility of leading the way for the other heroes, pioneering the Marvel films in a way that saw him involved in just about all but a few of them. I think if they could have gotten him involved in the Guardians of the Galaxy somehow they might have.

Derek Lutz was kind of a putz, but he was an interesting putz. He had loads of charm and personality but it came out after hitting this really weird and anti-everything filter. The only fight he gets in during the movie is the bar scene in which he’s accused of throwing paint on a football player and his girlfriend to protest the football program or something along those lines.

Since he knows where to hit, how hard, and what’s going to happen once he hits there it’d be a mistake to get into a fight with Sherlock Holmes unless you were just that fast and that strong to take him out. Being a technical fighter wouldn’t hurt either since he’d be looking at and analyzing every swing and movement a person made in order to defeat them.

This is one of the most epic fights in the entire MCU since it involves two of the most iconic figures that tend to draw people into their circle. In a straight one on one fight without armor, shield, or anything else Steve Rogers would beat Tony to a pulp. But with an AI that can analyze Captain America’s fight patterns and anticipate him Iron Man would have been able to take him, if not for the fact that Bucky was there too.

It’s not just anyone that can say they got thrown out of a window by the Norse god of trickery and survived. Of course his suit helped. But after that his suit isn’t as much of an advantage as it might have been against a human enemy. The Chitauri are just so numerous that keeping up with them is nearly impossible even for someone that’s wearing a walking arsenal.

I know we’re seeing a lot of Iron Man, but as I said in the beginning Downey Jr. didn’t do a lot of action films before this. In this movie we get to see Iron Man in action for the first time, and it’s nothing short of awesome. Now just think about how much he’s been upgraded since this film.

In Tony Stark’s estimation, you’ve got run before you can walk.