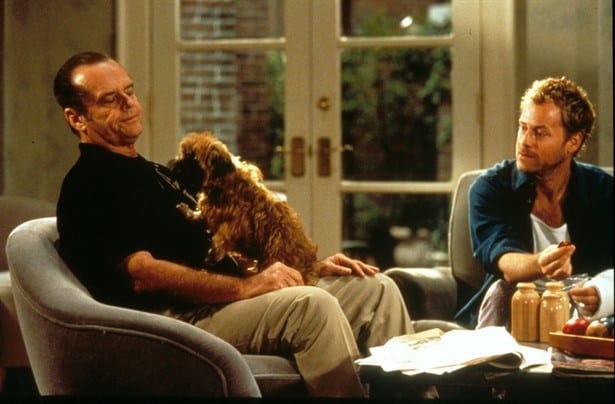 Greg Kinnear can play a lot of different roles but he’s the kind of actor that gets stepped over a little bit as though he’s not quite a strong enough personality to really stand up to other actors and assume any dominance in his role. This doesn’t make him a bad or a weak actor, as he can still play his role while another person grandstands or takes the lion’s share of attention. Kinnear tends to just sidle back until it’s his time to shine again, unless he’s the lead and then he just hangs around no matter what, almost like the world’s most patient man just waiting for his turn to talk.

He doesn’t seem pushy but he also has no qualms about speaking up.

5. As Good As It Gets-Simon Bishop

One thing about working with Jack Nicholson that everyone seems to realize is that you’ve either got to let him expound and stay out of the way or you’ve got to have a personality that’s just as big as his. If you don’t then it’s best to play your role to the best of your ability and hope that you don’t get drowned out since Jack is notorious for stealing the scene. Kinnear does just fine in his role as Simon though.

Captain Amazing is supposedly the most powerful hero in the city and yet he gets taken out so easily. I think it’s safe to say that he grew way too comfortable in his position and let the fame start to take over. Plus, it also seems like he’s the type that’s all brawn and no brains since he gets captured by his arch nemesis without much of a fight and then can’t even break free of his confinement.

This is based on a true story when the Philadelphia Eagles were having one of the worst seasons of their history. Coach Vermeil decided to take a chance on a local guy that loved to play football but was almost too old to really hang with the squad. Like it or not though Vince Papale became Vermeil’s miracle when he helped the Eagles to start back to their winning ways. And hey, look where they’re at now, headed into Super Bowl LII.

I’m not sure how people didn’t see the kindly Wayne Collins as something of a suspicious character right away. He’s just too good, too kind, and obviously has a crush on the female lead. When his fiance turns up dead he plays the part of the grieving would be husband pretty well, but it still didn’t feel right.  Once he turns though he turns hard and doesn’t even blink.

Sports movies are always fun because you get exaggerated roles and a sense of everything that wouldn’t happen in a baseball game in real life. That’s what makes it entertaining however, the fact that it doesn’t conform to the rules all the time. Oh, and Roy is without a doubt a no class jerk to his team and to everyone in general.

Greg Kinnear can act, he’s just got a quiet way about it.