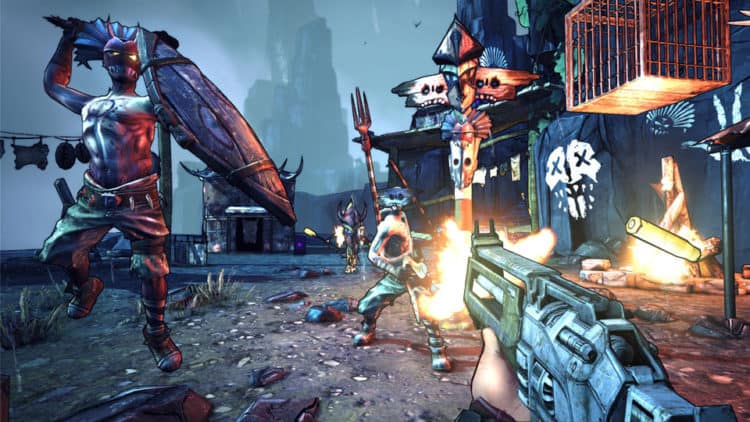 There’s more to Borderlands 2 than just heaps of guns and tons of shooting. As a matter of fact, this game is considered by critics and gamers alike to be the best Borderlands game to date. The continuation of the story five years after the events of the original Borderlands was smart, and it built the game on a great platform. The characters alone are well rounded and extremely adaptable. Between the four initial characters, the DLC characters, and the rest of the NPCs including the four original Vault Hunters, here are the top five characters that you can play from Borderlands 2.

With ten years in the Dahl military force, Axton can use a sabre turret. This turret is a gem of a weapon with a 360° rotation and upgradable features. The character first heard about the vault from a radio ad, but it was all a ruse created by Handsome Jack. As a matter of fact, Handsome Jack had been monitoring Axton’s bounty hunts and knew that the draw of the hunt will be too much fro Axton to refuse. Handsome Jack was correct in assuming that Axton would take the bait. One of the best parts about using Axton as a character is when he uses his melee weapon, which happens to be an awesome tomahawk.

Possibly one of the coolest characters in the game, Zero may initially feel limited; however, one of his skills is probably one of the best to play in the game: sniping. It’s true that Zero was built for sniping, but he also has an option for a melee weapon–his sword. You can focus on building up either skill, which we suggest instead of interchanging between the two. Zer0 is an interesting character. He speaks in haiku to begin with and quotes a lot of songs in his dialogue. He even displays his emotions through his holographs. Zer0 is a fun character to play with, even though you might find that he isn’t the strongest in the bunch.

The Gunzerker is easily a crowd favorite. He isn’t all brawl either considering that he’s the most customizable character out of this list. Salvador can deal tons of damage and you can build up his skill tree to improve the character. He’s best with the proper weapons, so you’ll want to swap weapons as much as possible to collect the best ones for the character. His Gunzerking skill allows him to wield any two weapons at the same time, so it helps to have the best two you can find. You can also build up Salvador to be able to handle a lot of damage. It definitely goes very well with his heavy steroidal look.

It’s unfortunate that the girl is one of the weaker characters within this game. However, Maya offers a lot of support to warrant her a position on this list. As a Human Siren, Maya had been training her powers since she was a child. However, being a siren is a crime in Pandora. She has a lot of story behind her that’s pivotal to the story, but she’s more than her backstory. Her abilities are useful as well. Maya can suspend her enemies in another dimension, locking them in stasis. This is called Phaselock, and this skill can be upgraded to bring even more damage. Maya is considered to be one of the most powerful Sirens in Pandora.

Released a couple of years after the first four, Krieg’s Psycho class character supposedly had previous vault experience that straddles the line between good and evil. He hears voices in his head that limits him towards murdering others that only deserve it. He suffers from DID (Dissociative Identity Disorder) and he hears a few female voices in his head. He uses an incredible buzz axe to attack through his Buzz Axe Rampage action skill, and it’s a pretty powerful weapon that can deal melee damage of up to 500%. He’s also one of only two Vault Hunters that use suicidal tactics. Krieg’s Skill Trees include Bloodlust, Mania, and Hellborn. Bloodlust focuses on ranged combat, which isn’t particularly his best considering that his best weapon is his axe. It’s best to build up his Mania because of its high reward in the end.