Home
Television
This is the Office Joke that Cost NBC $60,000 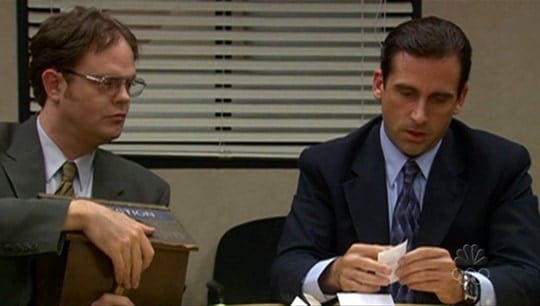 To be fair, the issue with various jokes and songs used in TV shows and movies and the clearance that’s needed for them gets a little ridiculous. But even with that in mind, the joke that pushed The Office’s budget over the line was one that they didn’t even think about it sounds like since taking a line from Eddie Money’s “two tickets to paradise” was costly enough that the price tag put the show way over for the one episode. From a monetary standpoint, the idea that it would cost so much for one line is absolutely insane, but that’s apparently just the way it is. During the episode in which Michael was dumped and had to find a new date to accompany him to Jamaica, he sang a single line from the aforementioned song and apparently this ended up costing the show a hefty sum that still boggles the mind since the cost of mentioning anything in show business appears to come with a price tag that would make a lot of people think twice since copyright laws are apparently pretty stiff and don’t flex that much for anyone. There are times when those that own the song might be lenient and let it go for a lesser cost or, something that’s unheard of, for nothing at all, but it’s not something that a person can count on since quite honestly they all want their money.

That’s the business unfortunately, it’s all about money and about what anyone and everyone can get for their material, which makes the whole idea that anyone is doing it for the love and the passion of it feel like lip service instead of reality. Find one person in the entertainment industry that’s not in it for the money at one point or another, someone that would gladly do something or offer a song or a performance for nothing without already being financially sound, and you just might find a unicorn waiting around the corner in the next minute. That’s how rare it appears to be that one would be able to use a well-known song with impunity, since a lot of them apparently charge by the second, and the thousands that can be demanded by some of these entertainers is ludicrous to the point that even a diehard fan might find a reason to pause when thinking of why such a thing is possible. Sure, no one wants anyone using their material without being properly cited and given the credit that they deserve for it, but asking for a thousand dollars per second or for tens of thousands for a few lines or a whole song still feels a bit ridiculous since no one’s attempting to remake the piece, they’re simply trying to use it in an effective way that could even give the song a little more attention than it might otherwise receive.

On the other hand, it does feel as though someone could have stopped this from happening by checking to make certain whether or not the song could be used in such a way. It’s definitely hard to imagine that uttering one verse would incur such a heavy price, but unless Steve Carell was improvising for the scene it’s likely that the writers were aware of what needed to happen when penning this line and should have been caught by the editor. If that’s not the case then so be it, but somewhere along the line, it does sound like someone suffered from a lack of proper communication that could have had this entire mess cleared up before it ever came to pass. Such an expensive ‘whoopsie’ is something that the network was no doubt hoping to avoid, but after they had to pay it one has to imagine that there were a few people in the hot seat since that kind of money being shelled out for one line of a song is absolutely ridiculous. Obviously those of us that enjoy the song and the show doesn’t always understand what goes into the making of each episode. The costs that are incurred when using any material from anything else in pop culture are simply enormous depending on the popularity of the piece apparently and if an agent or the originator of the material can get a payday out of it then they’re bound to do so.

Let’s not kid ourselves, after all, that’s what this is, a payday for Eddie Money, despite the fact that before his passing in 2019 he had a net worth of $20 million. One would think at that point that a person would be happy with what they have and could allow the use of their material to slide now and again. But that’s not how things work in show business since everyone’s out to get their money.