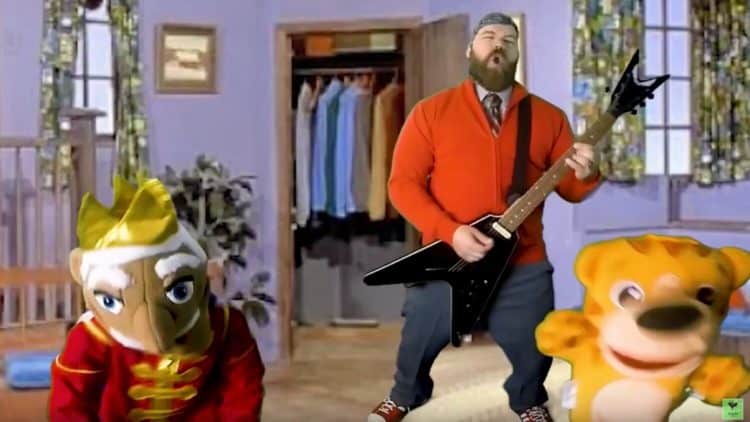 Well this is a different take on Mr. Rogers and it’s likely one that a lot of people wouldn’t get into readily but some might actually listen to just out of some strange but compelling interest since it does make sense to be curious about it. After all heavy metal does enhance a few things and some people might even think it enhances the opening theme to Mr. Rogers, but personally I don’t think so. That’s not enough reason to say that it doesn’t work at all but in all honesty it’s simply not up to my own personal standards so I’d have to give it a no. But hey, it does get points for innovation since applying heavy metal to pretty much anything runs the chance of being able to say that it’s exciting and fresh. This time around though the effort was there but the overall effect was enough to scare a lot of adults that might have been thinking they were going to hear something different. Plus, that wig looked like it was tattooed on didn’t it? Give the guy some respect for the overall look though since he did get the sweater and the pants down. Joey Paur of GeekTyrant has another video that might be of some interest.

Mr. Rogers has been a big topic for quite a while since he’s done so much for public broadcasting and been a huge influence on a lot of peoples’ lives throughout the years, even after he passed away. The fact that Tom Hanks brought the legend back to life for a short time is the reason why we’re going to be talking about him for a while to come since it’s Mr. Rogers after all, a guy that despite being fairly unassuming and not given to big, flashy displays, was still someone that was able to gain the kind of attention that a lot of shows would kill to receive. And how did he do it? He was being himself, he was teaching children, and he was giving people what they needed, not always what they wanted, but definitely something they needed to hear week after week. Mr. Rogers is the guy that was an easy target for a lot of naysayers because he didn’t play the same game they did and he didn’t need to. Being honest, frank, and sincere with his words and belief became enough to tell people that this was a guy to be looked up to and a guy that was there to actually see to the benefit of kids and anyone that happened to interact with him. Likely as not Mr. Rogers had his flaws, after all he was human and everyone has their quirks. Erin Blakemore of History has a few other things to say about Mr. Rogers.

The difference between everyone else and Mr. Rogers though is pretty simple, everyone else didn’t make their way in front of the US Senate to fight for public broadcasting and to avoid getting the budget slashed. Mr. Rogers has been an inspiration ever since and he had the reputation of being the man that helped kids learn in more ways than one. Throughout his career it was easy to hear disparaging things about him and there was a time when people were starting to believe that he was a dangerous man, but thankfully those rumors were unfounded and were allowed to die down after a while. In fact the same rumors were what gave rise to a Jim Carrey skit on In Living Color where he played the part of a man attempting to convince people that he was Mr. Rogers and was in fact a dangerous pervert that proceeded to beat up a store employee and sexually harass another one. In real life however Mr. Rogers was about as close to being a saint as you can come without being canonized. Some might argue with this one way or another but the truth is that Mr. Rogers did exemplify what it meant to be an educator of children, and as a result there were bound to be some detractors among the mass of people that paid attention to him.

All in all this version of his opening theme was loud, just loud, and that’s all I’ll say mostly because anything else just seems like it would be too critical. In all seriousness though a lot of people have tried their hand at emulating Mr. Rogers somehow over the years and a lot of it is to be commended since much of it is flattery and that which isn’t, well, it’s still indication that he did manage to leave a mark on this world and people are willing to admit it through words or actions. It’s likely that we won’t see another individual like Mr. Rogers for a while and that’s probably for the best since he was unique in a way that’s easy to cherish since just knowing he was there for as long as he was helped to make great memories that many people can carry with them.