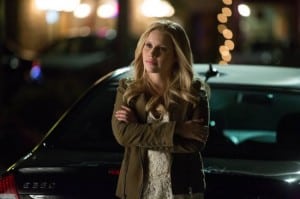 Change is hard and on The Vampire Diaries it doesn’t matter if you have lived for over a thousand years or just eighteen; this theme dominates “American Gothic” as we take another trip away from Mystic Falls. Katherine (Nina Dobrev) has briefly appeared this season; when her actions led to Jeremy’s (Steven R. McQueen) death and set in motion Elena’s new outlook on life. There is also the return of another familiar face as Elijah (Daniel Gillies) joins the cure hunting fray. This episode continues the recent hot streak, bringing together characters that have very different agendas when it comes to wanting the cure.

The town they end up in is very similar to Mystic Falls in a way, it is quiet and everybody knows everybody. In this case Katherine has compelled the whole town, but this compulsion doesn’t work when they think Elena is Katherine. Katherine was always going to have an issue with vampire Elena, but an Elena without humanity is far less predictable, particularly when she has Rebekah (Claire Holt) on her side. Rebekah has a strong dislike for Katherine (no surprise) so these barbed interactions are particularly fun to watch.

Elena has changed thanks to her lack of emotions and this is a huge disappointment to Elijah, particularly when Elena quotes what Elijah once wrote in a letter to her “Your compassion is a gift Elena, carry it with you always and forever.” Elena enjoys telling Elijah that she happily watched it burn along with the rest of her old life and her brother (cold Elena). The theme of change works on several levels in this episode; with Elijah he is trying to change Katherine into the Katerina he met long ago. He also tries this method on Elena, attempting to appeal to the Elena that he knew but she is not here at the moment. Instead there is this Elena who will do whatever it takes to get what she wants, how very Katherine of her. Is it a matter of trying to ‘save her’ before it is too later? 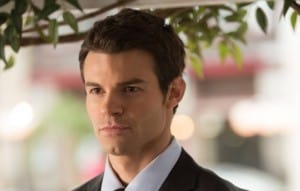 Trusting Katherine is not something that is easy to do as we have seen her manipulations so many times in the past. There are several occasions throughout this episode where this mistrust is proven correct; including the fake cure that Rebekah takes. There is sincerity to Katherine’s declaration to Elijah, when she gives him what appears to be the real cure that reminded me of the flashback scene in season 2 where we found out that Katherine did love Stefan (Paul Wesley); there are honest moments beneath all of the Katherine deception. Whether Katherine really loves Elijah is hard to gage, but in this scene I think she really wants to feel these emotions. It’s probably been too long and Katherine has experienced too much to become the Katerina that Elijah has idealized, but that doesn’t mean that she will remain the great manipulator.

Forcing change on someone isn’t a good option either and this is what Stefan and Damon (Ian Somerhalder) are attempting by getting Elena to take the cure. While I don’t agree with the random murder of innocent people I also think that Elena being in control of who she is a good thing and so Stefan and Damon will have to rethink their tactics when it comes to coaxing Elena to feel again. Having Damon and Stefan working together is a joy, particularly when the snark levels are this high. Damon is angry after the neck breaking incident, but he still falters when the prospect of a human Elena is dangled in front of him. Rebekah knows that he has a fear of Stefan getting Elena back if she becomes human again and she exploits this weakness. Damon knows that this is “his thing” and that he and Stefan share a habit of falling for the same girl; this is a habit that Stefan wants to break when this cure business is resolved. Can they break this 150-year cycle or are they doomed to repeat it?

Rebekah is still on her quest to be human and everyone meets this desire with an eye roll and derision. Katherine mentions that becoming human won’t erase everything that Rebekah is and that “You can’t have a do over.” Elijah reflects this sentiment and thinks that it is a romantic notion that won’t make Rebekah any happier than she is now. He also reminds her that their family isn’t a burden; though considering how much time Rebekah spent daggered I can understand why she has resentments. Elijah’s return is also a way to set up the new Originals spinoff and it’s good to have him back on the show (and not just because of how good he looks in a suit). 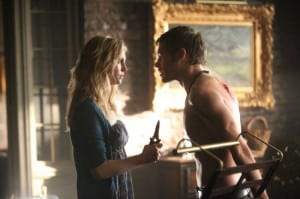 Back in Mystic Falls Klaus (Joseph Morgan) is suffering thanks to his encounter with Silas. Klaus calls on Caroline (Candice Accola) in his hour of need and despite still being angry thanks to the Tyler’s (Michael Trevino) exile she does indeed come to his aid. Caroline uses this opportunity to try and negotiate Tyler’s freedom and to reveal some important truths to Klaus, including the fact that everyone has pretty much tried to kill everyone and only one person has been banished. The important revelation in this scene is that Silas has an incredible amount of power if he can influence Klaus’ thoughts and that the time for everyone to come together is probably now.

– It has been said on multiple occasions (I don’t mind repeating myself), but Nina Dobrev has been doing an outstanding job of playing this new version of Elena and doubling up her roles once again as Katherine. The scene in the diner was a particular standout for this, especially as Elena has the upper hand for once and can get away with demanding Katherine’s shoes and jacket.

– I really wanted Katherine to have hidden the cure in the soap dish.

– Silas’ visit to Klaus as Caroline once again made me think of the First Evil from Buffy the Vampire Slayer. As will Nina Dobrev, Candice Accola is really great at playing a different version of the character we are used to seeing.

– A nice reminder that if Klaus dies so does his entire bloodline and therefore most of the characters on The Vampire Diaries.

It doesn’t look like the ‘old’ Elena will be back any time soon, especially if she has any say in the matter and considering what Elena is willing to do to ensure this Stefan and Damon will have to think carefully about their next move. The cure is on its way back to Mystic Falls and closer to Silas; will Klaus hand it over to him?

We will return to Mystic Falls on April 18 and to look at photos from this prom themed episode head here.