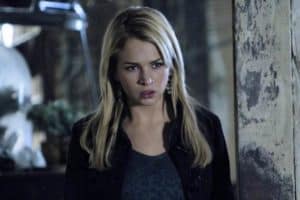 It was over a month ago that The Secret Circle went on hiatus, leaving fans thirsty for more drama from the Chance Harbor witches. Well, the gang is back and tonight they delivered a 1,2 punch to the jaw with Cassie’s beginning trek to the dark side and Faye’s quest for personal power. Also, we met Diana’s grandmother and Charles’s mother, Kate (Stepfanie Kramer), an Elder who has the nose of a genetically enhanced greyhound, which didn’t bode well for Dawn.

The mystery of Cassie’s ‘darkness’ dominated the hour and our undivided attention as we learned just how much powerful Cassie could be. Plus, Dawn and Charles aren’t the only adults looking to tap into Cassie’s power. Grandmother Kate, and seemingly the other Elders, want to harness Cassie’s energy to help balance the scales between good and evil. Now whether that means the Elders (or rather Kate) want to use Cassie as a weapon or as a leader for a great battle is still unclear (to me at least), but one thing is crystal clear for me: Kate didn’t have to go all homicidal to get Cassie to unleash her inner dark goddess. It was a move that took me for a loop and shot any chances of Kate to waltz back into town to lay the smackdown on Dawn (more on that later).

As for Cassie’s bottled up dark magic, I think its safe to say that it is connected to her emotions, most notably those of fear and anger. This is a deadly combination given how much stuff is coming at her right now, especially since Jane (or anyone she can truly trust) is nowhere to help her with her issues at the moment. Also, with Kate’s recent betrayal, it’s going to be seriously hard for Cassie to trust anyone with her dark magic situation. I will even go as far as suggesting that the current lack of trust will make it easier for Cassie to go Dark Cassie on the group and those around her with little to no remorse. Now that is scary, people.

Despite Kate’s lapse of judgement in trying to push Cassie to her true potential, I can actually still see why she did what she had to do. My only question is what would she have done if she had of failed?

As for Kate’s beef with Dawn, well, I think it’s more Kate looking out for her son than trying to reinforce the ban on practicing the craft. Think about it. Charles’s magic signature is damn near on everything he and Dawn have been involved with so far this season. So it would make sense for Kate to bear her claws for Dawn’s throat for technically setting up her son if the jig is blown. Dawn is the top dog in this operation and Charles is only her lap dog to do her bidding. But Dawn didn’t plan on Charles getting a backbone and a brain, which is a major problem in her book. 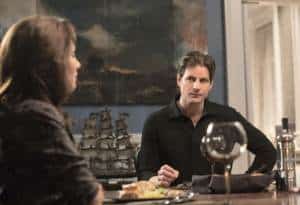 Even though Kate pretty much tried to talk some sense into her son, I seriously think that Charles is beyond gone at this point. I mean, he has two (maybe three) deaths under his belt so far and one of those was a kid. So yea, if Charles returns back from the dark side, it will be the miracle of the century at this point.

While Cassie was dealing with her own dark magic saga, Faye went to find how she can get a piece of that action and found Lee, a faux voodoo priest who isn’t to fake when everything was all said and done. While nothing big truly happened with Lee’s introduction and Faye’s quest for personal power, it did set the stage for things to come, which has to be a battle between Faye and Cassie at some point this season. Did you see the parallels of how Faye couldn’t get her feather spell to work, but Cassie’s Jake spell worked effortlessly? I know that Faye got hoodwinked by Lee, but if we are to believe (or what the fandom believes) that Faye is John Blackwell’s other daughter within the Circle, then shouldn’t Faye have some sort of power spurt? Just a thought.

Also, this storyline also gave Melissa something to do other than to still mope over Nick’s death, which is becoming pretty stale at this point, even if it is a sort of realistic portrayal of grief. Hopefully, we will see more from her soon.

Notable Moments of the Night

– Ashley Crow’s (Jane) name was not in the opening credits tonight, which was a bit of a surprise. What’s up with that or did I miss something?

– Faye’s line to Lee about being the “mean girls” just had to be a reference to The Craft‘s line of “We are the weirdos, mister…” uttered by Fairuza Balk’s Nancy after they were warned to look out for the weirdos in the area. Love that movie.

– I pray that we see more Kate Meade in the future.

So what did you guys think about the return of The Secret Circle? Are you excited for the things to come? What are your predictions about Cassie’s newfound power?