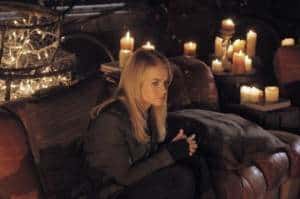 Despite everyone warning her off, Cassie seems determined to find out what happened during the night of the fire on The Secret Circle. Particularly, she wants to know whether or not her father was responsible for what happened 16 years ago. At the end of last week’s episode, Jake made a surprise reappearance in town after disappearing when the Circle learned that he was a witch hunter. He’s back to propose a crazy plan for Cassie to learn more about the fire.

When Cassie confronts Jake in this week’s The Secret Circle, she wonders whether he’s returned to Chance Harbor to kill her or any of the other Circle members. He insists that his intentions are pure and admits that he was actually present on the night of the fire, hiding in his parents’ car. Unfortunately, he doesn’t remember a lot about that night, but he thinks that Cassie can help him remember, or see for herself what happened. How will she do that? She’ll take a trip through his memories. Naturally, Diana and Adam are worried that Jake might have an ulterior motive for his plan.

Watch a sneak peek and trailer below for the January 19 episode of The Secret Circle, airing at 9:00 p.m. EST on The CW. Browse through photos for the episode here.