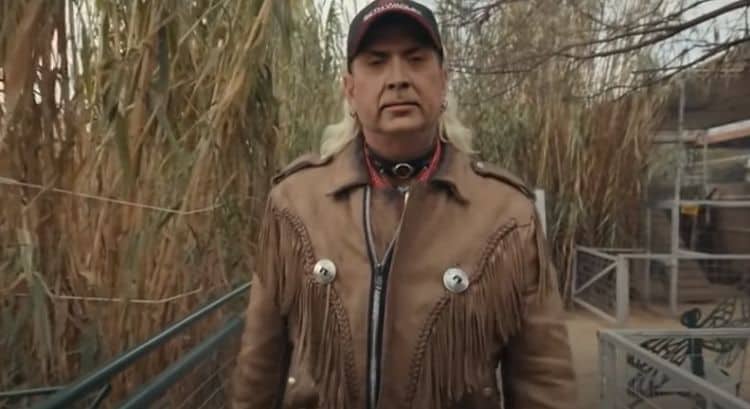 Let the hilarity, or the insanity, reign once again as the Tiger King series is apparently going to be happening at Amazon as Nicolas Cage takes on the role of the eccentric zookeeper Joe Exotic. If you thought the nuttiness of Joe Exotic was over and done with then you haven’t been paying attention since Joe is kind of like a bad rash, just when you think it’s all done and over with, that peculiar itch starts again and one has to grin and bear it while trying to wish the condition would just go away. Earlier this year we were introduced to the antics of Joe Exotic and several other exotic animal keepers that became a part of his world a while back as he started to feud with at least a couple of them. Carole Baskin and Jeff Lowe are two big names that people know at this point, and will likely be mentioned or put into the show since they’re both firmly within Joe’s orbit and have aided in the downfall of the individual that Cage will be playing. For his own part, Joe was ecstatic to hear that Cage will be playing his part in this series, since Joe is, quite honestly, a glory hound that for one reason or another has a very narcissistic streak that’s hard to understand since without being unkind he’s not that great of a guy it would appear. If anything, his narcissism appears to be a continual shield against a world that would likely tear him to pieces the first time he really let his guard down.

It might sound like a challenge, but it does feel that Cage will actually portray Joe in a manner that makes him appear even more unhinged, as anyone that’s seen Nicolas Cage act knows that he can go from zero to nuts in the span of a few seconds. Somehow it feels as though he’s got Joe beat when it comes to being eccentric, but it’s going to be fun to see who else is tapped to play Carole Baskin and Jeff Lowe, and the rest of Joe’s crew since the zookeeper did have a few people working for him, and it’s easy to think that there will be a few other personalities that were seen in the documentary that might pop in here and there. As far as Joe is concerned, he sounds excited about the whole project, as he initially wanted David Spade and Brad Pitt to play his role, but both turned it down. Can anyone really see Pitt playing the part of Joe Exotic? Spade might actually be a decent pick, but Joe definitely has a high opinion of himself that a lot of people don’t share considering that he’s a skinny, mullet-wearing loudmouth that has a ton of confidence but not a lot of common sense. This is a guy that went online and openly threatened another human being, making it obvious that he wanted to cause harm to someone and thereby giving Carole all the ammunition she needed to go after him and his zoo. And the mess with Jeff Lowe was just another layer on the ol’ dump cake that Joe called his life that finally helped to tip the whole thing over.

It’s still a question as to why we’re giving this guy this much attention, but the answer is simple: he’s drama, he’s unusual, and he’s worth looking at to make people feel better about their own lives, or something similar. No matter how great he thinks he is, Joe is about as special as a two-dollar bill, he might be rare, but it’s almost guaranteed there are a few of them out there, and like it or not, they’re essentially useless. That sounds unkind, doesn’t it? Well, the honest truth is that Joe did manage to bring the circus on himself, and at this point, he is still in jail and still seeking a pardon, which he hopefully doesn’t get, but he’s still able to speak to those on the outside and despite his claims of being sexually assaulted, he’s being babied as much as anyone can be in jail. It’s not so much a desire to deride and push Joe down any lower than he already is, but more of an attempt to remind people that this is a guy that’s not innocent, cool, or even worth glorifying in any way since, despite the impassioned pleas he made on the documentary that he was a good person that was trying to make a difference, he’s still a very spiteful individual that kept one of his ‘husbands’ drugged up and penned up continually and was completely inept when it came to operating a home for big cats. There wasn’t a single person on the documentary that felt clean in any way, but Joe was definitely the loudest about it, and you can bet that Cage is going to get the ‘loud’ part right.