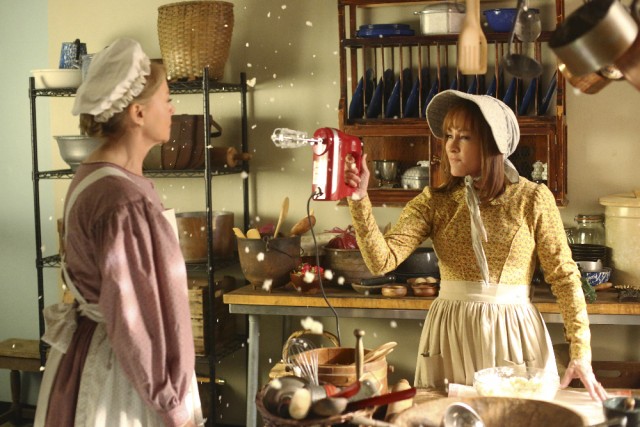 Thanksgiving is one of those holidays that’s becoming increasingly overlooked as The Middle so perfectly demonstrated last night.  Frankie’s busy schedule gets in the way of a “traditional” celebration, which by default leaves the rest of her family on their own for the day.

A few years back, after Frankie lost her job at the car dealership, she found seasonal work at this colonial village as a live player.  Now that her dentist office was bought out and closed temporarily for renovations, she definitely needs to pick up another job.  It was wishful thinking to expect Mike and Rusty’s diaper business to strike gold, but hey, it was worth checking with Mike just in case.  The family discussion of when to float Thanksgiving to was also hilarious.  Everyone’s got something going on throughout the next year, including Brick.  He said Cindy’s planning a couple’s retreat for them in February!  Please, writers, don’t forget about that when the time comes!

Ultimately, the Hecks did end up together after a very tough day.  Sue picked up three shifts at Spudsy’s in the food court with the ulterior motive of running into Logan again.  Rather than reconnecting with this mystery guy, she worked all day in the mall’s Black Friday Eve rush.  Love that crack at retail stores not even acknowledging Thanksgiving anymore, even though I admit I’m a big fan of shopping on those days.

Axl had a surprisingly emotional day spent at the bar since this is his first holiday as a 21 year old.  He literally cried at the mere mention of how lost and just generally stressed out he is about life.  I hate to say it, but he’s only a junior in college now.  If he’s this bad at this point, he’s going to completely break down in his senior year.  As funny as the Axe Man was, Sean Donahue actually stole those bar scenes for me.  He debuted his new look and lifestyle last week at homecoming, much to his mother’s dismay.  I was cracking up when Axl asked how Sean got out of family obligations, and he went on to describe the fight with Nancy.  Sean claimed he doesn’t eat anything with a mother anymore, which was just begging for the response from Nancy that he doesn’t have a mother anymore either.  I loved this so much.  Sean needs to come home more often just to get these reactions from his mom!

This all left Brick and Mike home together.  Naturally, Mike planted himself in front of the TV for football games, and Brick read.  Even after a power outage struck the neighborhood, Brick was prepared with a flashlight for his books, but he gave in and played poker with his bored dad.  Mike should’ve stuck to cornhole since he knew Brick was at least good at that!

As everyone started getting home, they joined Mike and Brick in their game of poker at the dining room table.  Axl even started crying again, which is a whole new side of him I never expected to see.  Sue had her own breakthrough with Brad’s help regarding the kind of desperate girl she was turning into hoping to not-so-casually run into Logan.  That just leftFrankie’s bad day at work with her co-worker (played by guest star Faith Ford) to drive home the point that the Hecks do indeed have a lot to be thankful for.  Whatever your plans for next Thursday, even if that means you’re working or drinking at a bar, I hope everyone has the opportunity to spend some time with their loved ones.