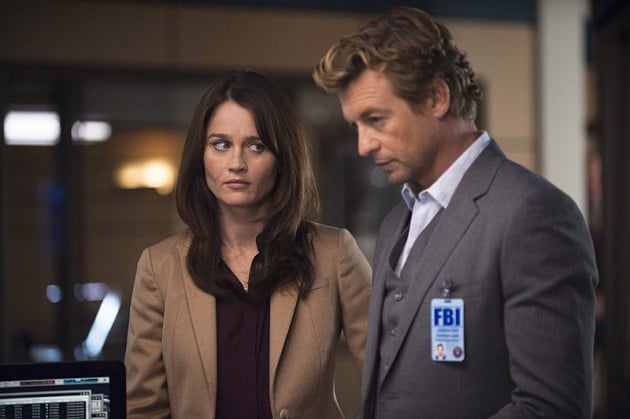 Loyalty and trust were key elements in this week’s episode of The Mentalist as Abbott’s career as an FBI agent, as well as Mrs. Abbott’s new career in D.C., was hanging in the balance. It didn’t take much convincing on anyone’s part for the team to put their own careers on the line in order to help Abbott save his.

DEA Agent Bill Peterson (Dylan Baker) seemed pretty determined to take down Dennis Abbott for good when the latter wouldn’t share the spotlight solving the last case in the last episode. Peterson was so bent on getting his revenge on Abbott that he actually flew all the way down to Mexico, dug up the coffin that contained the skeleton of a feared drug lord in Rio Bravo, and pulled the bullet that was shot from Abbott’s gun from its fractured skull. I guess desperate times calls for desperate measures for both Abbott and Peterson.

Patrick Jane was the first person to jump on board to help Abbott save his job and take down Agent Peterson. As Abbott told his wife Lena, Jane is a friend and Abbott trusts him with his life. This makes Abbott an excellent judge of character, because Patrick Jane has very few real friends so it was very sweet and touching that Abbott would consider Patrick Jane as his friend.

Teresa Lisbon was in on the plan from the start when Jane told her while the two of them went out for ice-cream cones that he had Wiley keep tabs on Peterson. Wiley didn’t seem to have an issue with being in on the plan because the technology genius respects Abbott and I guess he enjoys being a part of Patrick Jane’s crazy schemes.

I was a little surprised that they didn’t bring Cho in on the plan earlier, but I suppose that Lisbon didn’t want to risk her friend’s career like this. She even said that they were coloring way outside the lines this time around, as they tried to bring down Agent Peterson but don’t you love it when the stakes are high? I know I do.

Cho then tried to keep Agent Vega out of the loop, reason being that she is the rookie on the team, and Cho felt that he is responsible for her. However, to Vega’s credit, she wanted in when her curiosity got the better of her. Perhaps it’s because she wanted to help Abbott save his job or it could be that she’s a part of the team, and she deserves to know what’s going on. Either way, she got her wish.

There were many little moments in this episode that made me laugh out loud, like the look on Lisbon’s face when Wiley said he had trouble keeping secrets, and she responded in true Lisbon fashion that it’s a good thing he doesn’t work for the FBI. Or that scene at Peterson’s house with Lisbon raining on Jane’s parade about entering the right alarm code with Patrick telling her afterwards, “Lisbon, you’re killing the magic here.” The part where Cho wouldn’t go near Peterson’s cat was also hilarious. Guess he’s not much of a cat person (#LOL).

It was also wonderful to see Jane’s old carnie friends Pete and Samantha when they helped Jane out with his plan to help Abbott. They really are like family to our favorite mentalist, given that they were both thrilled to know that Patrick has found someone to love, and Pete was quick to notice that Jane was still wearing his wedding ring. Pete even tried to convince Jane to remove the ring when he told Patrick that Angela would have wanted Jane to move on and be happy, though this comment seemed to have touched a nerve with Patrick because he seemed uncomfortable in discussing the subject when he quickly steered the conversation elsewhere.

Bringing things back to Operation Save Abbott’s Job, Vega did an admirable job in tailing and stalling Peterson, but she should have taken her hair out of that ponytail when she rammed into Peterson’s car and was looking for her auto insurance paperwork. It would have hidden her face on top of the sunglasses and made her less recognizable to Peterson so he wouldn’t have immediately rushed off to his house.

I was sitting on the edge of my seat as Jane, Lisbon, Cho and Wiley (who finally let Abbott in on the plan when he asked his boss for clearance to get money from the FBI’s evidence locker) raced against the clock to get out of Peterson’s house before the DEA Agent came back. They were this close to getting caught when Patrick Jane locked and closed the door just as Agent Peterson was coming in. I also wondered if Jane remembered to close the hidden fireplace/safe before he left. Guess we’ll just have to assume that he did because Peterson did not suspect a thing when he came home.

The photos that Abbott showed Peterson of his cat sitting on piles of cash were absolutely priceless. It kind of made me think twice about Peterson’s character. I mean, the man has a cat, so he can’t be all bad, right?

The downside to this episode was knowing that Abbott would be leaving for Washington D.C. to be with his wife, but the silver lining was that Kimball Cho will be promoted to take Abbott’s place. Cho definitely deserves the job, and he will do great at it. Plus, the look on his face when Abbott promoted him was so ecstatic that he needed another taco.

Wiley and Vega were absolutely adorable when they danced together. I’d love to see more of these two, and I’m also glad to see Patrick and Teresa finally having a discussion about Jane’s fear of losing Lisbon. Teresa was completely right, of course, because either one of them could be killed or die on any given day, and they can’t live their lives worrying about it. However, somehow I doubt that Lisbon’s sense of logic will ease Jane’s feeling of terror in the back of his mind because Patrick Jane knows what it’s like to lose someone he loves so dearly all too well when Red John killed his wife and daughter. It certainly won’t be easy to risk shattering his heart like that again, though seeing that he’s very much in love with Lisbon, it might already be too late.

Only four episodes remain until the ultimate series finale and from what I have seen from the promo clip for next week’s episode, things just got real. Will you be tuning in, Mentalist fans? I certainly will.