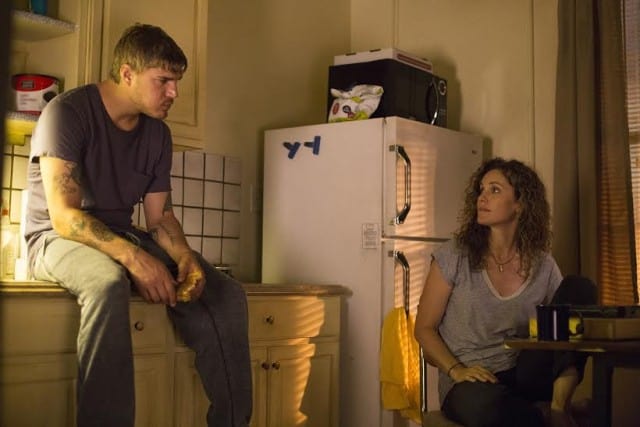 We are finally caught up to speed with Laurie and Tommy Garvey this week on The Leftovers.  Because of the nature of their work and their emotional and physical distance from the rest of the Garvey family, it makes sense that they got their own episode.  That said, it was the darkest episode yet this season in contrast to the new Texas setting.

Last season, both mother and son were wrapped up in their own separate cults.  Guilty Remnant members never referred to themselves as a cult, nor did Holy Wayne and his followers, but the cult mentality was there.  Now Laurie and Tommy are both free of their pasts and helping to enlighten other questioning GR members.  By renting out an office space, Laurie offers group meetings utilizing her therapist skills and even offers the place as a shelter for anyone in need.

We are first introduced to these meetings with the latest addition of Susan, a mother and wife who joined the GR for whatever personal reason she felt.  Laurie can certainly relate to her, and she thinks she’s actually ready to return home to her family.  It soon becomes clear that whatever was wrong in Susan’s mind before she left her comfy life in the first place wasn’t completely rehabilitated.  She drives herself and her family into the path of an oncoming truck.

It was the loss of Susan’s life that makes Tommy and Laurie question what they’re doing wrong.  I suppose they take this failure harder than any successes they may have already witnessed, which makes sense.  They decide it’s time to open up about their own past involvements with the GR and Holy Wayne as a way to get on level terms with the remaining members of their group.  Now Tommy all but dubs himself Holy Tommy and starts offering healing hugs, a la Holy Wayne.  We never got clear answers about Wayne’s supposed powers last season so it’s all a matter of who you choose to believe.  Do we actually believe Tommy inherited Wayne’s healing hug powers, or is he hoping to appeal to these desperate people?  I’m going with the latter, as his story about being too afraid of his powers was convincing but almost too ridiculous.

We also saw another familiar face return in this episode.  You’ll recall Meg was Laurie’s first recruit into the Mapleton chapter of the Guilty Remnant.  It seems she’s risen into some higher ranking position now in another town, where she encounters Tommy.  I don’t think she’s ever met him before but she certainly knows who he is.  When he’s caught in the act of trying to help a girl who looks like she could benefit from Laurie’s group, he’s tied up and left in the back of a truck when Meg pays him a visit.  This was the first time I’d ever seen the warning of rape explicitly stated before an episode of The Leftovers.  She silently has her way with him and teases him with a lighter after he’s been doused with gasoline.  Instead, she leaves him with the message to say hello to his mother for her.

Laurie broke away from the GR after the massive fire that almost killed Jill.  Obviously, she’s been through hell and back so writing is a great form of therapy.  If and when her book does get published, I would imagine Meg and the rest of the Guilty Remnant will only be more violent.

I think that about catches us up with all the returning characters.  Next week it looks like we’ll pick up back in Miracle where Evie’s disappearance (and Kevin’s questionable involvement) is explored further.