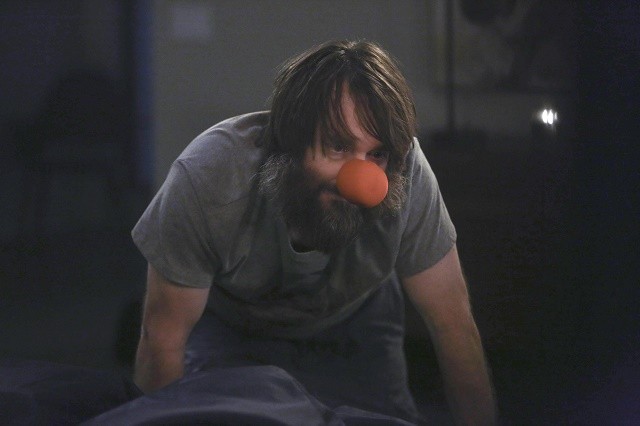 The Last Man on Earth‘s pilot is a wildly effective mediation on existential ideas. What happens when man is truly alone? What does it mean to “lose hope”? What happens when the Earth takes the world back from the huamns? There are an abundance of “big picture” questions the memorable pilot raises, ones that seemed to fall by the way side as Phil tried to convince every female he came across to sleepÂ with him (though on some level, I suppose this presents Phil as a devolved “animal” of sorts… either way, it wasn’t fun to watch). The show’s increasingly terrific second season, however, has slowly moved back towards these ideas, following Phil’s brother in space as he struggles with loneliness, while trying to redeem Phil’s character in its attempts to rebuild its Tucson society with more nuance and color.

Last week’s episode was a big step forward in the right direction; and because of the foundation “Secret Santa” lays, “Silent Night” is able to effectively re-establish the larger existential themes and ideas ofÂ The Last Man on Earth. Make no mistake, “Silent Night” is a half hour full of fart jokes and awkward Thandy moments, but it’s also the most thematically-rich episode the show’s ever delivered – not to mention the most dramatic and heartbreaking of them all, culminating in a sequence as powerful and moving as anything you’ll see on television this year in its final moments. How it gets to that moment, however, is just as impressive as the minute it leads to at the end of the episode.

“Silent Night” is about the powerful reaffirmation of life, of how its presence – and sometimes, its absence – can lead us to major revelations of self, moments and actions that define us as human beings. In this vein, “Silent Night” is the culmination of the 22 episodes preceding it. With Phil’s journey back to humanity completed, the last few episodes ofÂ Last Man on EarthÂ have been concerned with pushing this family of survivors apart: Todd and Melissa fighting, Phil 2.0 trying to leave, Gail and Erica turning their backs on Phil 2.0, and Carol’s jealousy of Erica have created new friction within the group (while also adding dimension to its secondary characters, arguably the most important development in Season 2). A little bit of Secret Santa brought them back together, but those conflicts remained – and it’s not until Phil 2.0 crashes on the ground, clutching his side in pain that the family comes back together, and fights for someone toÂ live.

Conversely, the thematic unity of Mike’s isolated story falls into place in this moment. As Mike begins to find his will to live again, Phil 2.0’s situation continues to decline, setting up a very Taoist story of life and death, of how the zero-sum cost of the world around us creates this horribly poetic give-and-take game with the universe. From the moment “Silent Night” begins, it’s pretty clear Phil’s group is fighting to save a dying man, while a man near his own death fights alone for the chance to live again. “Silent Night” depicts two unique, though very connected stories about human survival, and how sometimes, the fight for our humanity is bigger than any battle our bodies fight with the world.

It also helps that every single scene in “Silent Night” is a memorable one, led by the two duos of Phil/Todd and Carol/Melissa scrounging medical materials from an abandoned, dark hospital. Not only does it give us some more thematic unity (Todd doesn’t come out and do “The Worm,” but he does wiggle around like one showing off his dance moves), but it allows the show’s lesser relationship dramas to gain a little emotional weight. I’m not going to say Melissa is really an empathetic character yet, but her breakdown in front of Carol is a pretty moving little moment, again reaffirming the wonderful contradiction that humanity is, and how awful things in life (break-ups, pregnancy, death) are often the ones that reinforce the strongest emotional bonds between others. There are inklings of that in other scenes, of course (most notably Todd consoling Gail before and during Phil 2.0’s surgery), but to find a strong emotional moment centered around Melissa is a rarity, and in this case, helps set the stage for the story to follow.

And man, that final scene is a doozy: Mike’s re-entry into the atmosphere (one of many times in this episode his story echoes that ofÂ Gravity, I might add) and Phil 2.0’s surgery are intercut with each other, two short scenes that make for one incredibly drawn out, dramatic experience. And in those moments, the loudest, most dramatic momentsÂ The Last Man on EarthÂ has ever had, the quiet ruminations on humanity rise to the surface once again. Carol cries on Phil’s shoulder as Phil 2.0’s surgery goes sideways, a single tear falls from Erica’s eye and Melissa stands frozen, watching Gail and Todd scramble to save Phil, while in space, Mike careens to the earth, holding on tightly to little worm Phil, cutting to black when Phil 2.0’s flat lining heart monitor and Mike’s screams have reached a harmonious pitch, the most poetic, chaotic closing moment “Silent Night” could possibly offer.

It could not have been more effective. With “Silent Night,”Â The Last Man on EarthÂ closes out 2015 as strongly as it started it, a circular journey no better mirrored by the arc of its main character through the first 23 episodes of the show. And while “Silent Night” certainly offers a number of interesting dramatic events to ponder during The Last Man on Earth‘sÂ hiatus (right now, it’s scheduled to return sometime in the spring), it’s the reflective moments of the episode – a holiday installment that embodies the trueÂ meaning of the holidays in wonderful, comedically dark fashion -Â that leave me so hopeful for the show’s return in 2016.