Home
Television
With The Good Place, NBC’s Comedy Lineup Begins to Enter A… Well, You Forking Get It 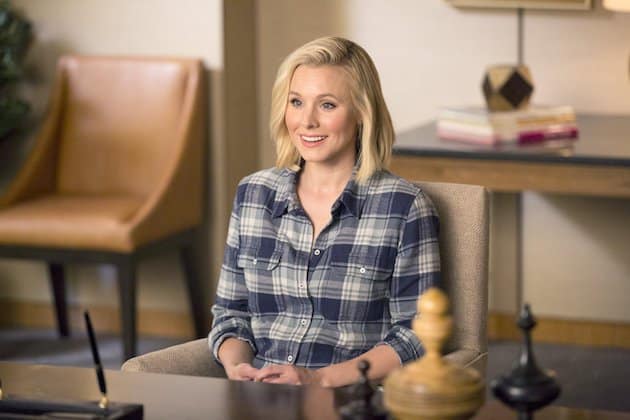 Right now, NBC’s entire comedy line-up consists of three shows: The Carmichael Show, Superstore, and …. The Good Place, the only new comedy of note in NBC’s fall 2016 lineup. While The Good Place is certainly created in the vein of previous NBC comedies – created by Mike Schur, starring Cheers alum Ted Danson – it’s a decidedly different approach to comedy than NBC – or any other network, really – has aimed for in recent years, a high concept premise that neither debases itself for broad appeal, or relies on a laugh track so audiences know when to laugh. Make no mistake: this is the strongest pilot NBC’s aired since Hannibal, and the best new comedy the network’s had since Community: The Good Place is not just a show that rides on the name of its creator and stars to be mediocre, and that in and of itself makes it an impressive entry into the Fall 2016 network lineup.

The Good Place is like a mix between Pushing Daisies, Bored to Death, and LOST: there’s mystery, existential angst, and Ted Danson showing America he’s still got plenty of physical comedy left in him to deliver. Kristen Bell stars as Eleanor, a selfish thirty-something who accidentally ends up in Heaven after a bad accident, and some terrible administrative work by the people upstairs. Hijinks ensue, and Eleanor finds herself challenging her conception of self, and whether she can actually transform herself into a good person – particularly when she’s being “good” to cover the series of lies she tells to convince everyone she was a criminal defense lawyer who saved lives and fed starving third-world children before her terrible accident with a mobile billboard.

There’s plenty of humor and pathos in the basic premise alone to carry this show through three or four episodes: what surprised me about The Good Place is the show’s mastery of smaller details, something Schur’s previous television shows have specifically struggled with in the past. The Good Place not only understands its characters and how they interact with each other, but how they interact with themselves: like Danson’s Michael, a man who toiled away in divine construct training for 200 years before getting his first chance at afterlife management, or Tahani, a condescending British woman whose facade is quickly peeled away in the show’s first hour (immediately removing her presence as the show’s de facto antagonist, a nice little bit of subversion episode two really benefits from). The Good Place is not just a show with an exotic location and mythology-inspiring premise; it’s a show trying to grasp at the fundamental truths of who we are as humans, and whether our “goodness” is something we possess, something we nurture, or something we simply imitate through the biologically-selfish nature of our physical existence.

Perhaps the most impressive part of The Good Place is how it tiptoes around the “big” questions, letting them exist in the peripheries of its narrative, much more focused on Eleanor’s spiritual exploration and Michael’s sense of destiny than the how or why Eleanor ended up where she is. Of course, it’s still a central part of the narrative (especially in episode two, when Eleanor’s behavior is reflected in the world around her), but like any great show in its infancy (this is where the LOST comparisons are strongest), The Good Place understands its world is nothing without the color and dimension of the people within it, the rare comedy pilot with its priorities in the right place.

Confident, intriguing, and wonderfully performed, The Good Place is everything network comedy needed heading into the 2016 season; unfortunately, it doesn’t appear there are many shows like it on the line-up moving forward (the next biggest “high concept” comedy is probably Son of Zorn, and that show is a hot mess already). Then again, there aren’t many shows on television like The Good Place, comedy or otherwise, anyway: that alone makes this a freshman offering to treasure this fall, the rare pilot that can exceed the typical first-episode boundaries of “promising” and “intriguing”, opting to focus on the heart of its show, rather than the flashy elements surrounding it. To say this is the best comedy pilot of the fall is an understatement; if there’s only one new comedy you watch this fall, The Good Place should be it.

NBC’s The Good Place is a wonderfully bright, thoughtful new comedy, a deserved, welcome return to network television for both Ted Danson and Kristen Bell.