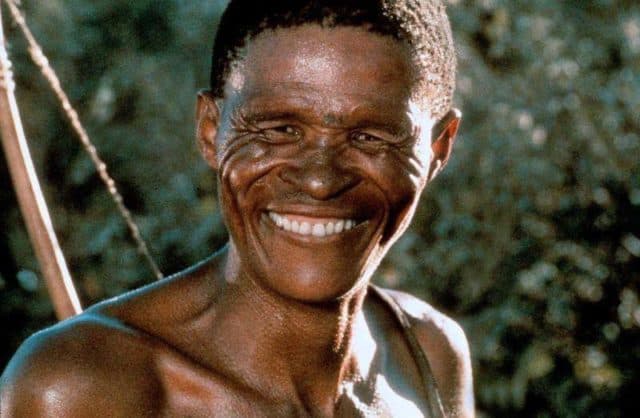 The Gods Must Be Crazy is one of the strangest movies to ever be released to the public, but it was also seen as one of the most racist by some. There are a lot of undertones that can be seen in the film that might suggest such a thing, and there are even moments when you might think that what they’re doing could be done a different way. But if you look at movies like Blazing Saddles and other such films that use racism as a plot device and even as a means of comedy you might think about lightening up and just enjoying the film for what it is, another story that is waiting to be told. When a Coke bottle is flung out of an airplane carelessly and lands without breaking in the desert Xi and his people find it and assume it must be a gift from the gods.

However, when it turns out that there’s only one of them and that it can’t possibly be possessed by more than one person at a time, that blessing quickly becomes a curse. Xi offers to take the cursed item far away and is granted the opportunity. Along the way though he meets some very strange people, in his reckoning, and is arrested after trying to poach a goat to feed himself. When it’s determined that he can’t survive in captivity however he’s released and used as a guide as he embarks upon another leg of his strange adventure.

10. It ran in one theater for so long that the reels burned up.

The film ran for 532 consecutive days at Oaks Theater in Cupertino, California. That became a record long run for any film in Northern California. The reels had to be discarded however since they were simply too battered and too damaged to be repaired.

9. During its release the film was the world’s biggest non-US box office hit.

A lot of films haven’t been able to compete with US films when it comes to the box office and this was likely no different. It was kind of an odd film but it had that strange, alluring quality that allowed people to get sucked into watching it at least once if not twice. The sequel wasn’t quite as good since it wasn’t as new or as exciting. But this movie did manage to get a lot of views.

8. The depiction of the bushmen was no longer accurate as of 1980.

For the sake of the film the bushmen were left the way they’d been in the past so as to savor the experience. But things were no longer this way moving into the 80’s, as the world had caught up with these people by then in some way at least and they knew a little more than their predecessors.

7. The production team consisted of less than thirty men.

The director wanted them all to be men and they were all novices on top of it. He said he did this on purpose so that everyone would listen to him and not come up with some idea that they knew better. More or less that’s what he said.

6. None of the people that were shown in the film received royalties.

To be a little more accurate, none of the Khosian people featured in this film received any royalties. This doesn’t seem legal if they had contracts. But even if they didn’t it would be heavily frowned upon today.

5. The director suffered a heart attack after working too hard.

After months of working 12 to 18 hour days he suffered a pretty heavy heart attack and had to be replaced when it came to finishing the rest of the film so that he could recuperate.

4. It was banned in Trinidad and Tobago.

This was done because of the implications that the film was in some way racist. No one really fought this it seems since there were moments in the film that seemed a little suspect. But throughout the rest of the world it was still a hit since it worked as a comedy and as an overall interesting film.

3. The main plot of the film centers around a Coke bottle.

After everything you’ve seen in the description and everything you might remember this is the meat of the story. The Coke bottle that was flung from a plane and found by Xi was the reason why this movie got its start in the first place. It’s an interesting idea to be honest.

The film wound up making $100 million overall, which back then was a huge sum of money.

1. The star only received a minimal salary for his work.

It was a strange movie, but it was still worth watching.