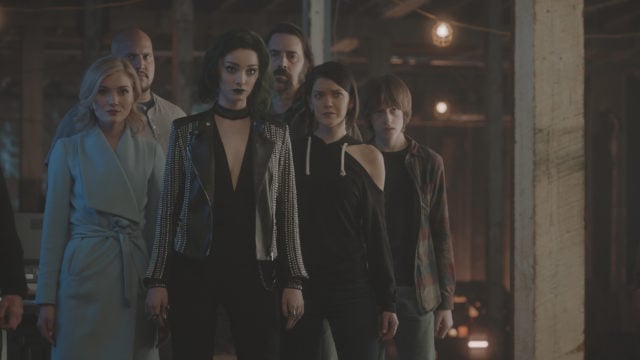 Though it’s been with us for only a short time, the freshman season of FOX’s X-Men series The Gifted has come and gone. Throughout the thirteen episodes in the freshman run, they’ve managed to keep the stakes high through both emotional and action-packed stories. The two-part finale completely tore down the status quo that was previously established and set up a future for the show that’s very akin to the X-Men comics and films. Relationships were built and others were destroyed, and the battle for mutant-kind has higher stakes than ever before.

The finale established a clear parallel to the familiar X-Men stories. The Frost sisters not-so-subtly connect to Emma Frost of X-Men First Class and the group she was a part of, the Hellfire Club. They push for the abduction of Dr. Campbell, which is something that the Mutant Underground goes along with, but they are unable to complete the mission when he holds children hostage. This causes a rift between The Frost sisters and the MU, and it leads the show in some surprising directions. The Frosts have clearly rattled some cages and rallied some believers to the Hellfire Club cause, including Andy (Von) Strucker and Polaris, so Andy turns against his family and Polaris against her baby daddy/boyfriend Marcos. This creates a pretty spot-on parallel between the rift between Professor Xavier and Erik Lensherr in the X-Men lore, so the revived Hellfire Club is the new Brotherhood, and the MU was hand-chosen by the X-Men for a reason. I like the parallels this presents, especially to X-Men First Class, because XMFC in particular gave the most backstory and depth to characters like Xavier, Magneto and Raven/Mystique. It works really well here for basically the same reason: these characters have depth. You’ve spent an entire season getting to know the Struckers, Polaris, Eclipse, etc., so to have them divided across a major rift not only fits with the X-Men theme and overall story, but it makes them relatable to every human who has a fractured family.

The elements of these two episodes really worked well together, making the two-hour finale (as a whole) much easier to watch. Had they aired consecutive weeks, the first episode might have been out of place or felt like only exposition. But the second is when Jace Turner takes his team to the Mutant Underground hideout and there’s a final standoff before the destruction of the building, which leads to the destruction of the core group. Balancing the emotional, exposition side with the explosive, exciting finale worked especially well in the two-hour format.

Here are a few thoughts:

Overall, this season of The Gifted has been a high-octane thrill ride, and carries the emotional depth to give the series a long term life. They masterfully balance action, emotion, and avoiding tropes in what so far has been an excellent addition to TV’s superhero offerings. They’ve taken the best of the X-Men stories and given them more depth, life, and relatability. I’m very pleased with how the first season turned out, and I’m looking forward to continued coverage as the second season heads into production.

The conflict between humans and mutants comes to a violent head in the strong, two-part finale of The Gifted