Home
Television
The Gifted
The Gifted Fall Finale Review: The Underground Is “eXploited” 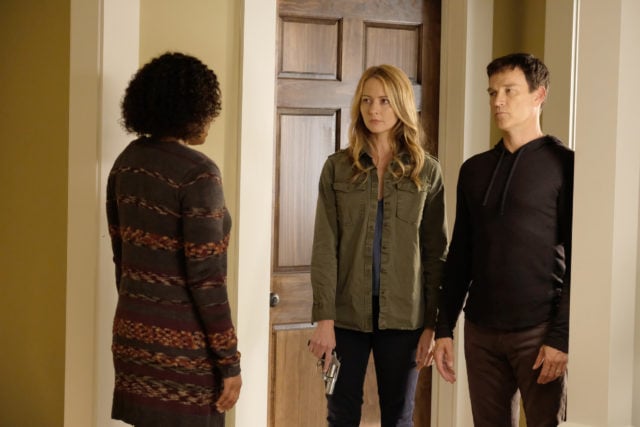 As each week goes by, The Gifted goes in deeper to the story it’s trying to tell and bears striking similarities to modern day politics. Much like modern day politics, the decisions in “eXploited” were increasingly driven by brash generalization and strong emotion on both sides of the conflict. Clear parallels were drawn, but some were more obvious than others. Still, the show’s not-so-subtle political undertones have provided the steady prodding by which The Gifted has continued to move forward, and they’ve reached a serious climax in the conflict as they hit the last episode of 2017.

Last week’s episode didn’t completely throw me off Esme’s scent, but I never completely trusted her. So I can hardly say that I was shocked when Esme used her powers to pit the normal, human Struckers against the rest of the Underground in conflicting efforts to get back their imprisoned children/friends. She sent Reed and Amy (by giving them an idea) to try and reason with Jace Turner to get the mutants out of Trask’s facility, while convincing the Mutants to turn against them and attack. By playing at her own game instead of as a team, Esme destroyed any shred of humanity that Jace Turner had left, and cemented the state of war between Sentinel Services and the mutant population. It’s very clear that a war is coming, and there might even be more than two sides, depending on what the heck Esme and her two doppelgangers are playing at.

Perhaps the most compelling scene in the entire episode was the scene between four (almost) entirely powerless human beings. Reed and Kate Strucker ran off to try and reason with Sentinel Services’ own Jace Turner, at his home, with his wife present. Seeing Reed and Kate make their impassioned plea made an impression on Paula Turner, even though they were held at gunpoint. Jace is laser focused on “justice” for his daughter, but in Reed and Kate, Paula sees kindred spirits who love their children as much as she and Jace loved their daughter. The drive to the Turners and their subsequent interactions was another strong showcase for both Stephen Moyer and Amy Acker, who have been both brilliant and criminally underused so far in this show. I get it. The mutants are much  more exciting because they have powers, but inserting humans who don’t have powers on different sides of the conflict makes it all feel more grounded and real. Additionally, the fact that this approach worked on Turner (albeit briefly) speaks volumes for the state of discourse in our country. With so much interaction done through shields of technology, discourse just doesn’t carry the same weight or compassion that it once did. Appealing to empathy is much easier when done in person.

Overall, I found The Gifted‘s fall finale to be exciting and compelling, and I can’t wait for the show to finish up its freshman run in 2018. I will return then with more reviews!