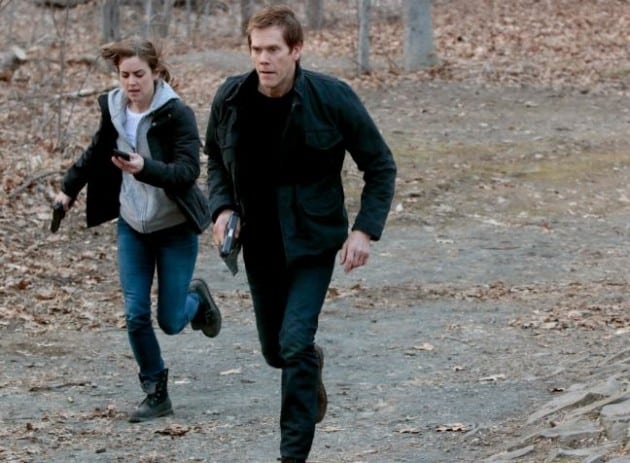 Well, I’m certainly filled with mixed emotions. The season/series (I’m phrasing it this way, because EW reported several days ago that Sony is currently shopping the show to other distributors, but FOX has been calling it the “series”) finale of The Following was certainly gripping and exciting to the very last second, but I’m not totally satisfied. Of course, most of my dissatisfaction comes from FOX’s cancellation of the show, rather than the show itself. Had it been renewed, I would be very excited for the next season. All in all, the finale was gripping, thrilling, and everything you’d want out of a finale of a returning show.

This week, on the season/series finale of The Following: The fight with Theo and Daisy comes to a head as they drag Gina Mendez back into things, hoping to get to Ryan. Eliza’s organization, meanwhile, shows its true power and reveals its FBI mole. Max is torn between Mike’s health and stopping Theo. Ryan is taken by Theo. Everyone works to protect Gwen from Eliza and Theo’s force.

Overall, I’m impressed at the story. A few weeks ago, I was sure that The Following was heading downhill after the death of Joe Carroll. I wasn’t wrong, but I wasn’t right either. They needed about an episode to recover, but after  that episode was some of the most thrilling television that the team has ever put forth. I was certainly impressed. Even after last week, when they wrapped the Mark/Mike storyline, I was convinced that they would wrap the Theo story and leave the door open for a Season 4. Instead, I felt ZERO closure on the story. Eliza’s organization is bigger and stronger, and I became very interested in them, only for that to be taken away. And RYAN’s story?!?!? Wow.  The story gave equal weight to Theo and the bigger and better things, and overall, I was very impressed with the finale story.

Then, of course, comes the bad taste in my mouth. The dreaded cancellation. I mentioned previously that Sony is shopping The Following to other networks, and even though other, non-traditional venues are saving shows more now than ever, I am not optimistic. The ratings dropped off heavily from two seasons ago, even though The Following (arguably) just had its best creative season so far. I had completely come to terms with the show’s cancellation, until the final episodes left me wanting more. In this day and age, though, you never know. So fingers crossed, “followers.”

I had a few nitpicks with some of the directions they chose during the course of the season. For instance, Gwen was a little too whiny. Perhaps they were just doing a great job of creating sympathy for Ryan (I’ll get to that in a minute), but I mean the guy hunts serial killers for a living and he gets NO slack. However, Zuleikha Robinson has been doing some excellent work when they give her good material. This week’s final episodes? She was phenomenal. I only brought this up to build to the compliment, because I took notice of the change in feelings toward her. I also have hated the Lisa Campbell character since she first showed up on screen. Turns out, that too was with good reason. The only reason I bring these up is that rarely do the writers and creative team of this show tip their hand, and it lessens my enjoyment a little when they do.

All of this proves that Kevin Bacon deserves to be the front of something. Whether it’s movies, another TV show, The Following on some other venue, or whatever, Bacon deserves to be at the front of the action. His work as Ryan Hardy has been nothing short of astounding. I’m constantly amazed at the emotional places he’s able to take Ryan, and that he’s always a part of the action. I watched these episodes thinking “he’s a true action star,” and hopefully, his future roles will indicate his talent.

If this is it for The Following (in all likelihood, it is), I have quite enjoyed the ride. Sure, it’s had ups and downs, but by and large it’s been a gripping, thrilling show to watch. Kevin Bacon, Shawn Ashmore, Jessica Stroup, James Purefoy, Kevin Williamson, Alexi Hawley, and all the other people that have worked on the show should be very proud of it. I’ve enjoyed tuning my TV and having the crap scared out of me for the last three years, and it’s been a pleasure to review the show. Thank you!

What did you think? Were you satisfied with the finale? Were you wanting the show to end or do you want another season? Let us know!