Home
Entertainment
The Five WrestleManias That Defined Their Eras 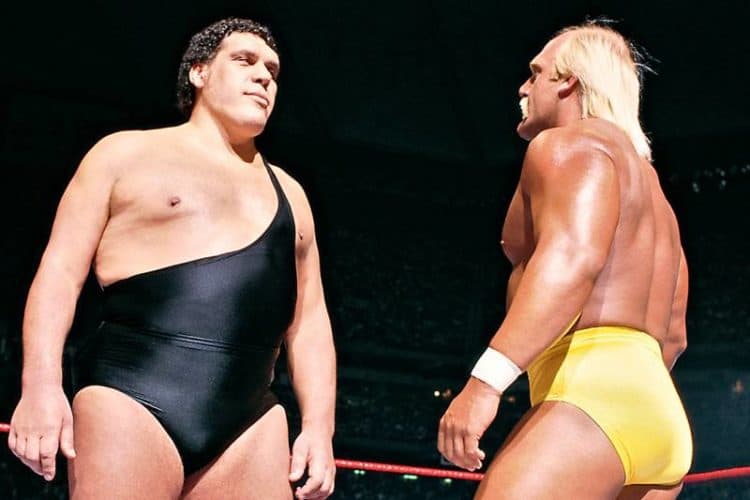 WrestleMania is almost upon us. It’s the biggest show of the year for the biggest sports-entertainment company around. Every year the WWE pulls out all the stops to make their oldest PPV event feel like the culmination of a year’s worth of stories. Sadly, after thirty-five iterations, fans have seen their share of stinkers. On the other hand, there are those handful of shows that not only rose to the occasion but ended up being, in hindsight, an era-defining event.

Though Pro Wrestling has been around for well over a hundred years, the idea of a major entertainment spectacle didn’t come into vogue until the 1970s. Still, though, it was a niche market. It wasn’t until Vince McMahon and Hulk Hogan ushered in the 1980’s “wrestling boom” did the medium become mainstream. The era of huge superstars with cartoon personalities performing in front of sold-out crowds is known as the TITAN era.

After the boom went bust and guys like Hogan, Randy Savage, and Ultimate Warrior stepped away, the WWF lost all but its most devout fanbase. The company then shifted to small (i.e. not roided), athletic wrestlers and doubled-down on their cartoon character presentation. This period was marketed as a “NEW GENERATION” of the WWF, and that’s how its known today as well.

A second boom occurred in the late-90’s, fueled by the Monday Night ratings battle between the WWF and Turner’s World Championship Wrestling (WCW). This was a period of chaotic shows, soap opera storylines, larger than life personalities, and more “ATTITUDE” than you can shake a blood-covered kendo stick at.

After the boom went bust (again) and guys like Stone Cold, The Rock, and Mick Foley stepped away, the WWF lost all but its most devout fanbase. A search went out to find the next top star, who could step into the shoes vacated by the previous era’s biggest names. One name was found, though it took John Cena a few years to get from this…

to being the top star of the “RUTHLESS AGGRESSION” era.

The era of John Cena was a long, mostly stagnant one for the newly-branded WWE. The Titan years lasted almost a decade, the New Generation years only half that time, the Attitude Era was a four year flash in the pan, but the Ruthless Aggression period stretched for eleven years, and though a lot of it can be looked back on with fondness, much of it was meandering, boring, and embarrassing to watch.

Finally, the company shifted from offering PPV events for their big supershows (they basically invented PPV, incidentally) to moving everything over to a Netflix-style WWE Network. This came when only Netflix was a major player in the streaming market, showing Vince could still be a bit prescient when push came to shove. The NETWORK ERA saw a shift to bigger, grander, more spectacle-driven entertainment, with longer shows and an emphasis on marathon-style matches.

With the buzz that WWE is about to shift their PPVs away from the Network onto something like ESPN+, it’s likely that a new era is upon us. We might even already be in one; it’s too early to say for sure. Either way, the next era will certainly, like those before it, be reflected on by fans as a period of time best defined by one critical WrestleMania event…

The era of larger than life cartoon heroes and villains was never better-presented than during the third WrestleMania show. The first installment was very much a proof of concept, low-key in its presentation (but not lacking in entertainment or spectacle, not with Liberace and Mohammad Ali in the house). WrestleMania 2 is sort of the Mario 2, Link’s Awakening, Return of Samus of the bunch, different and more experimental (airing three different shows in three different venues at the same time) as the “formula” was still being discovered.

It wasn’t until the third show that everything finally felt like WrestleMania. Aretha Franklin sang America the Beautiful, Randy Savage and Ricky Steamboat stole the show with a fast-paced, story-driven undercard title match, and the main-event featured the biggest possible match of the year. That’s how you do a WrestleMania. That’s the formula that is followed every year, but here it all came together. There’s no better showcase for the Titan Era than seeing this…

Even though the NEW GENERATION is sort of the black sheep of WWE’s history, there was some good to be found. The era is mostly defined by Vince’s continued search for the next Hulk Hogan. During that search, the one name he kept coming back to was Bret Hart.

To be clear, when I say “he kept coming back” to Hart, I mean he would stick Bret in the main-event while looking for a better alternative, then kick Hart to the curb when he thought he found one, only to grow frustrated and return to the reliable placeholder. He tried Lex Luger, Diesel, Shawn Michaels; no one had the heart of the fans like Bret Hart, and there was no better show in this period than the one that should have been his coronation. WrestleMania X, hosted in the historical Madison Square Garden, ended with Bret Hart vanquishing the monstrous Yokozuna to win the WWF Championship, followed by his being hoisted onto the shoulders of the entire babyface locker room… 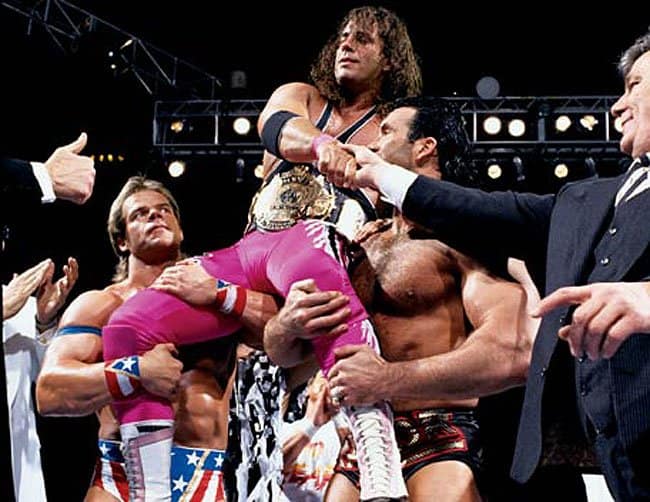 If that’s not a signal that the WWF had their guy, nothing was.

Much like the Titan Era, the Attitude Days were a period of huge popularity and mainstream success. Unlike the Titan Era, where only one superstar was the undisputed face of the company, the late-90’s saw two different superstars rise to the level of Hulk Hogan. How this happened is a lightning-in-a-bottle circumstance that can never be duplicated (despite twenty years of trying).

Steve Austin was the top star of the company—the Hogan of his era—but a terrible neck injury eventually sidelined him for nearly a year. In the interim, The Rock rose from being one of the top villains of the show to the most popular babyface act in the world. When Austin came back, the company now had two popular characters, both fan-favorites, and a mega show coming down the pipeline.

It’s very hard to manufacture a “dream match” in wrestling. Usually the term refers to a match between top stars from different companies that would otherwise never be able to mingle. With Austin and Rock, Vince was able to put on a dream match PPV in-house, pitting Austin and Rock against each other, one-on-one, for the top title. It was a true “Wrestling Superbowl” for the show often dubbed the “Superbowl of Wrestling.”

WrestleMania has many iconic moments, but few can elicit goosebumps from fans of that era like the hype video for Austin v Rock II…

As previously mentioned, it took a little bit for John Cena to emerge as the star to build WWE around. This new era arguably began with WrestleMania XX, but neither Chris Benoit nor Eddie Guerrero were the kind of character Vince wanted to make the centerpiece of his show. Batista main-evented Mania 21, and though he looked like the next big thing, he quickly moved to SmackDown to anchor the blue show, leaving Raw in need of a top superstar.

John Cena established himself as the exact kind of persona Vince wants at the top of his card. Cena is big, strong, improvisational, good with a script, good on the mic and good (enough) in the ring. He’s also a tireless ambassador and clean-cut guy, able to work a thirty minute match and then fly across the globe to do a media tour in India. He had a je ne sais quoi that you just can’t teach, and WrestleMania 22 was his true coronation.

Cena had already won the WWE Championship in the undercard of the previous Mania, but it was here where he solidified himself as the top star, beating Triple H in Chicago by submitting him clean in the middle of the ring… 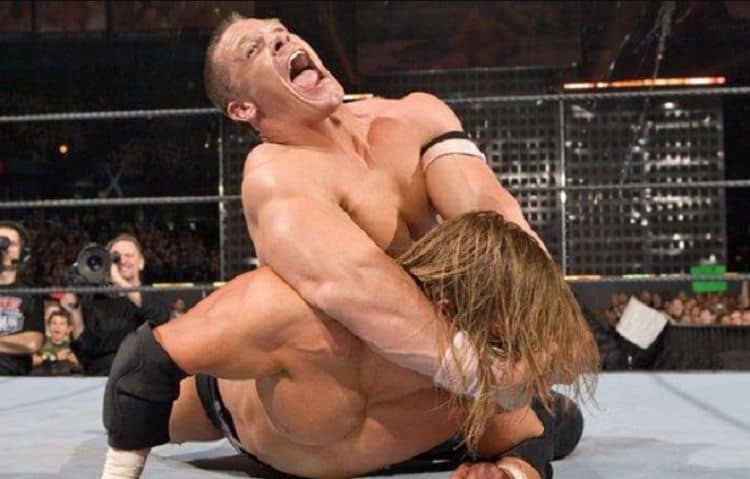 At the time, there was no bigger backstage politicker, no wrestler with a worse ratio of “actual importance to manufactured importance” than Triple H. He and Undertaker were the lone big stars leftover from the Attitude Era, and even though actual history says he was maybe fourth or fifth on the list of “important” wrestlers back then, manufactured WWE history puts him in a tie for first, so losing the way he did to the person he did was a big deal.

WrestleMania 22 may have come a couple years into this new era, but this was the year where that era found its face.

The Network years, with respect to WrestleMania, is best known as the era where the show stopped being numbered. Instead it came to be known by the logo (WrestleMania Playbutton, Bullhorns, DisneyWorld, Fleur De Lis, etc). It was also the era where WrestleMania ballooned to seven hour slogs. The idea was to give the fans their money’s worth but really they only served to make fans leave during the main-event…and boy did this era have some crappy main-events. Sure there’s a Bryan vs Orton vs Batista masterpiece, and a Reigns vs Lesnar I slugfest, but there was also Reigns vs Triple H, Reigns vs Undertaker, Reigns vs Lesnar II…see the pattern?

This was also the era where part-time performers were given a bigger role than ever before. After a year of being creatively wasted, overexposed, and booked like idiots, Vince and co. often found it hard to find two wrestlers who could sell a WrestleMania. So, he threw his millions at fresh-faced part-timer performers who were mostly untainted by WWE’s “creative” team.

This period is best defined by WrestleMania 34 because this was the longest, most top-heavy, most part-time focused show of the bunch. You’ve got a hot undercard filled with guys who, under better management could have main-evented the show. You’ve got part-timers everywhere; Ronda Rousey, Kurt Angle, Shane McMahon, Stephanie McMahon, Triple H, Undertaker, John Cena. 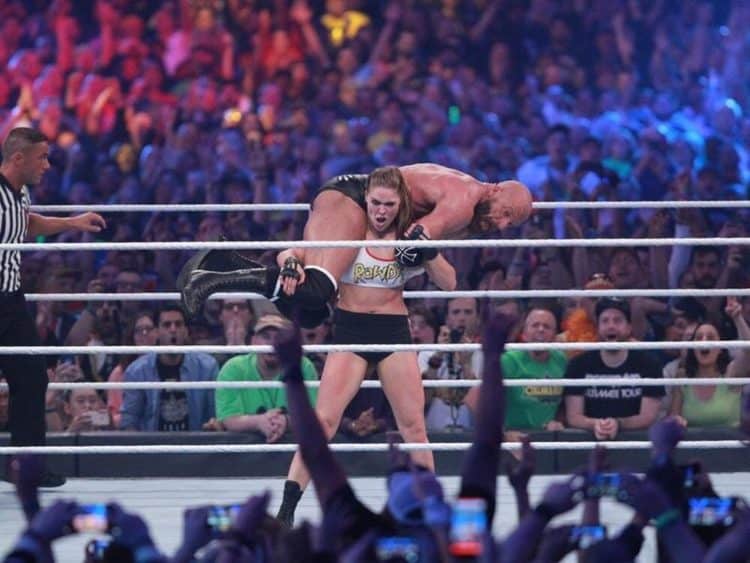 And you’ve got a main-event (Roman Reigns vs Brock Lesnar,  again) that was such a bore, such a drag, such a wet fart finish after seven hours, that fans took to bouncing a literal beach ball around in order to entertain themselves. It was big, it was spectacle-heavy, it was overstuffed, it was convoluted.

It was the Network Era in a nutshell.