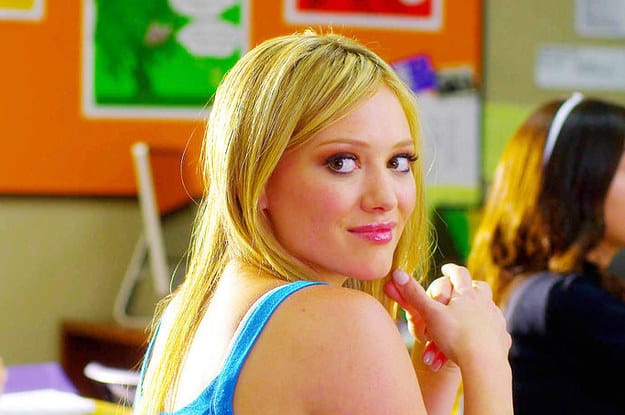 It’s very easy to think that Hilary Duff is someone that rose too quickly and kind of tapered off after a while. But if you’ve seen her resurgence in popularity you can admit that she never really went anywhere, but did in fact suffer a decline throughout the years in her career. That being said she’s never been gone completely and has been trying hard to establish herself once again as the person that people want to see and hear from, no matter if it comes in the form of movies, TV, or music. Her fans have stayed loyal throughout the years as she’s continued to seek different ways to remain relevant. In the movies she’s never been a humongous star, but she’s more than held her own since she’s been in a number of projects that have allowed her to show that she does have a good deal of talent when it comes to the silver screen.

Here are a few of her best movies to date.

If you believed her good girl image could never be tarnished then this movie was a serious hit to that belief no doubt since she plays a very over-sexualized individual named Yonica Babyyeah, a young pop star who is in actuality related to the main character, though neither of them realize this right away. Thankfully as the story progresses we get to learn more and find out that she’s the main character’s daughter, who was kidnapped after his wife was killed. It’s a movie that you have to pay attention to in order to enjoy, but it does offer a lot of comical moments that only John Cusack can deliver on, though Hilary definitely does her part.

4. The Haunting of Sharon Tate

Owen Gliebermann of Variety and others can say whatever they want about a movie, that’s their given right after all, but saying that this movie turned the Manson murders into ‘schlock horror’ is a bit dismissive since quite honestly it’s either this or a parody. Otherwise the murder of Shannon Tate becomes a rather depressing movie since the Manson family, however glorified they’ve become throughout the years by one article, one writer or another, were certified nut cases that exhibited the mental stability of a toddler trying to resist the desire to act on whatever impulse comes to mind first. Trying to shame a movie simply because it shows the ridiculousness of an action seems kind of dismissive.

The Cinderella legend has been done and redone so many times that at this point one really has to pick and choose which one they want to say is their favorite since it comes down to who plays the part convincingly, who comes up with a more original story, and of course, who treats the original story with the kind of respect it deserves. Hilary and the rest of the cast do a fairly good job since the whole idea behind it is that of a young woman seeking to find the kind of acceptance that she doesn’t initially get from anyone, only to realize that she’s going to have to work harder than she ever has to get it.

Perhaps the most amusing part of this movie is thinking that Isabella is the one that is attempting to ruin Lizzie’s chance to be known when in fact it’s Paolo who is running a scam and is lip syncing the whole time to his music. When Isabella shows support for Lizzie things change in a big way and the movie becomes validated in a big way since if anyone’s ever listened to Hilary sing, and many have, they know that she has an amazing voice and no lack of confidence when she’s on stage. If anything, this movie had to be a challenge for her largely because she had to downplay the very talent that made her famous.

1. Cheaper by the Dozen

When you see how a family of four or five tend to have issues with each other you get the feeling that anything more would be just a disaster waiting to happen since that many kids in a house is going to be nothing less than utter chaos at any given moment just waiting to pop off. And you’d be right. The Baker’s are not a bad family but they are certainly a box of chaos just waiting to be unleashed with the wrong moment always at hand and the catalyst just waiting to be unleashed. But despite all that they’re still a very loving family through all of it, no matter that the bundle of issues that has to be dealt with on a continual basis sometimes seems a bit overwhelming.

Hilary has definitely matured and showed that she can do much more than sing.