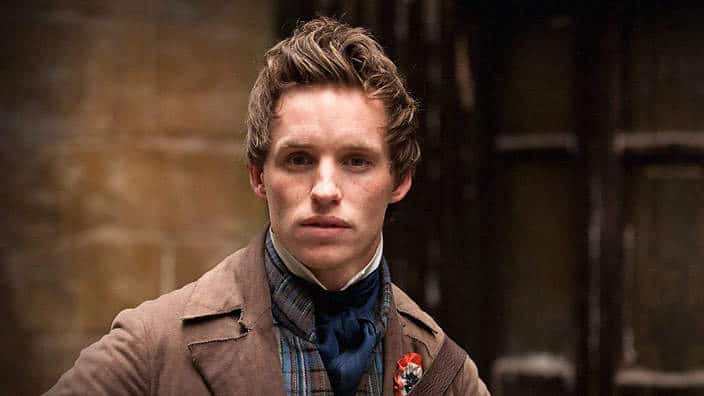 Eddie Redmayne seemed to have come out of nowhere when he really started getting popular, but in truth he’s been acting since he was much younger and has been in show business since the late 90s. In many ways it seems as though he can’t really play any role without each one being compared to the roll he did prior, but he’s far more versatile than that since a lot of his characters are quite different and in some cases take on a very different persona as well as different mannerisms that allow him to give the viewer something unique. His acting ability is rather impressive and his talents when it comes to creating the characters he’s been cast as is great enough that he’s become a rather big star in the last several years. Of course some of this does have to do with the fact that he became another favorite character in J.K. Rowlings’ stable.

This might be a very confusing movie to some that don’t really get into it, but the main gist is that Balem, Titus, and Kalique are siblings that want control of the earth, which is not the birthplace of humanity but instead a sort of depository where humans are to be harvested after a time. When it’s discovered that Jupiter Jones is heir to royalty however it becomes known that her claim to the earth is stronger than anyone’s, and as a result she is targeted for elimination. Thanks to Caine and a few others that have been charged with keeping her safe though she eventually realizes her potential and becomes the woman she was meant to be.

Given all that’s been going on with gender identity and the many different arguments that are for or against it this movie is no doubt one of those that gained a lot of attention for various reasons, one of which is the sheer entertainment value. Lili has been living with her secret for so long that it’s become painful to try and switch back and forth between the two identities she holds within her head, but when a doctor decides to tell her about an operation that can turn her into woman on the outside she jumps on it. The only problem is the surgery is still quite dangerous and she dies in the process.

3. The Theory of Everything

Many people seem to have an issue with this movie since it’s been claimed that it kind of glosses over a lot of things and makes Stephen Hawking look like a godsend to humanity when in truth there was much more to the man’s life than what was shown. Granted there might have been, but it’s a movie and only so much can make it in, otherwise it would be a documentary that might be shown on TV. What was apparent however is that Hawking, during his time on this earth, was a genius and someone that didn’t often give up in the face of adversity no matter how bad things got at times.

Les Miserables is a tale that has been told and retold for many years now and has become something of a classic that people remember from high school or college as it’s a very popular title to roll out when it comes time to learn about popular literature and other media. The story revolves greatly around Jean Valjean and his exploits from being a convict to a wealthy businessman and philanthropist. Upon promising Fantine to look after her daughter Cosette he meets Marius at one point in the story and since Marius and Cosette are to be wed at one point he keeps the younger man safe until the two can be reunited. This story is an epic tale that has entertained a great many people throughout its run and been seen on stage and on the big screen more than once.

One thing you can say about Newt Scamander is that he’s not much of a people person. He loves the practice of studying and collecting rare magical animals and knows just how to treat each one of them and how to care for them, but talking to people is something he doesn’t have a lot of skill at. But despite all his little quirks he’s a very powerful wizard which is something that doesn’t seem to get a lot of attention in the first film but comes into play in the most recent film since he’s able to defend himself and others while still proving to be a very sturdy combatant when he needs to be. But there’s no doubt about it, Newt is more of a pacifist and doesn’t like confrontations, or choosing sides.

Eddie is definitely a surprise, but a pleasant one.