Home
Movies
The Deleted Lost Boys Scene that Was Too Violent 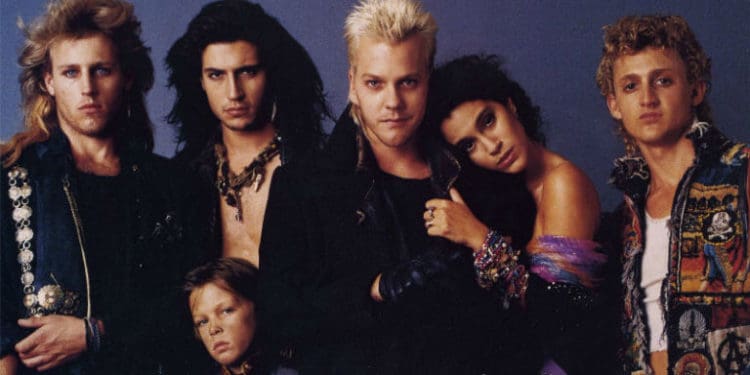 This was a movie in which vampires that looked like rock gods were literally ripping the roof off of a car, hanging upside down like bats, and slaughtering people left and right, and there was a scene that was TOO violent? Kevin Burwick of MovieWeb at least gave us the scene, which was that of David, the leader of the group played by Keifer Sutherland, ripping open the back of a guy’s head like a cantaloupe, while smiling in that strangely appealing way the character had. But really, that was too violent? We got the chance to see Alex Winter’s character nearly gutted with a stake, one of the others was knocked into a garlic water bath before exploding, and that one scene was just too violent? Eh, maybe for the time period it was, but even then that seems to be laughable really since if you look at the market for horror The Lost Boys was actually kind of tame compared to a lot of stuff out there. And yet it was still one of the handful of movies that became a cult classic and helped to rock the decade in a big way.

To call anything ‘too violent’ even now is enough to make people grin since these days a movie has to really dig in to claim that title considering all that’s been seen to date. Acts of violence in movies usually aren’t something that makes anyone squeamish when you really think about it, but there are almost always those individuals that fail to see how it adds anything to the movie itself. Well, considering how this is a vampire movie and also considering that vampire movies have been notoriously violent throughout the years, y’know, since their creation, as January Nelson of Though Catalog might agree, there’s a good idea that violence and vampires just kind of goes hand in hand. For those that want to argue that Bela Lugosi and Christopher Lee weren’t this violent you’d be right since they were old school and had a very different way of doing things. But look at it this way, a vampire, from the legends and myths a lot of us have heard and read and watched since we were kids, subsist on a pretty steady diet of blood, the red life-giving fluid that keeps our hearts pumping and our bodies functioning. Removing that from an individual that doesn’t want to share it without any regard for their own well-being tends to get violent, and when you’re dealing with a creature that is immeasurably stronger than you are and is seeking to survive, or at least enjoy their meal, then the propensity for violence tends to go up a bit. Violence is kind of a byproduct of trying to stay alive at times for some individuals, especially in the movies.

Every Halloween we get to trot this and several other movies out to discuss and every year it seems we have something else to talk about, but the level of violence in a HORROR movie is kind of laughable to discuss since wondering just how people can think that one scene is way too violent when compared to the rest of the movie is hard to fathom. It’s a horror movie…about vampires….that suck the blood from living humans….of COURSE it’s going to get violent. It’s hard to type at times when trying not to laugh at the ideas of those that happen to think that certain scenes in movies get too violent or too fringe to show to people, especially when the majority of people might actually enjoy said scenes. What’s so great about this movie is that a lot of people tend to remember it fondly while at the same time remembering that it was violent and it was bloody in the right areas, meaning it didn’t simply revel in the bloodshed for the sake of it. There was a story there after all and people were introduced to a new breed of vampire no matter how quickly they came and went. Unfortunately the sequels weren’t really that great and as a result they kind of flopped and went straight to DVD.

But too violent? Those that are of the mind to think such a thing must not have been watching a lot of horror movies back in the day, and as for Joel Schumacher, well, it’s hard to think that someone in charge could have that thin of skin when it came to adding in one of the best moments. In all fairness the scene was there, but the camera cut around it so as not to focus on the whole aspect of the unfortunate victim’s head being split wide open. All in all it wasn’t missed all that much, but to think that it was omitted in this manner is kind of surprising since horror movies being allowed to go full tilt is what helps the audience to get into them.