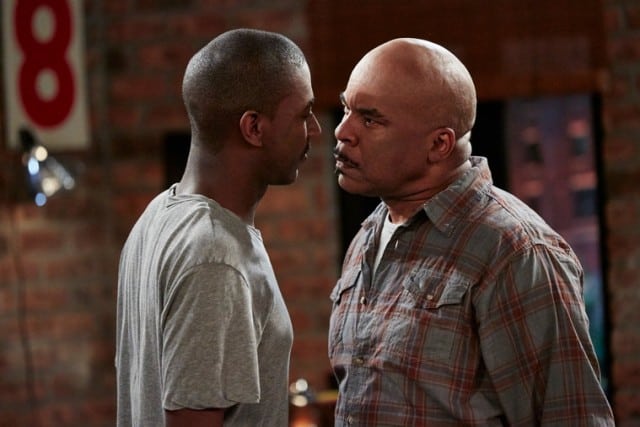 Had every episode of The Carmichael Show proceeded as “Protest” and “Gender” did, TCS could quickly fall into a frustrating pattern of sitcom superficiality, using cardboard cutouts of people to explore common American ideologies in a way that may be entertaining and occasionally thought-provoking, but still existing in the disconnected world of Multi-Camera Land, where the inherent artificiality can often dissolve the power of a strong message to society. There’s a reason the “Very Special Episode” carries such a laughable legacy, dipping into the saccharine and inauthentic to try and convey some important point about humanity’s flaws. Smartly, The Carmichael Show‘s final two episodes take a different approach to its comedy: rather than using situations to cause debate between family members (and Maxine!), the last two episodes focus the story on its characters, and use them as the avenue for discussion, which makes both “Prayer” and “Guns” more rewarding, relatable episodes than those preceding it.

Other episodes in the show’s brief first season had hints of this, but “Prayer” and “Guns” take this exploration to the next level, doing so by focusing on the dichotomies in Maxine and Jerrod’s relationship, which are starting to come to light as they spend more and more time living together. Already understanding that Maxine is treated as the outsider, it’s logical that “Prayer” and “Guns” would begin with her coming at odds with the values of Jerrod’s family. However, that gets heightened when it’s revealed Jerrod prays and has a gun, pieces of identity Maxine associated with his parents and never thought she’d see in him. From there, Maxine and Jerrod begin to try and figure out how they’re going to be able to live together when they have such opposing ideals, and there, The Carmichael Show really begins to come to life, just as the season comes to a close.

Previous episodes have shined in their ability to explore the various debates plaguing society on a daily basis: marriage, gender, health, religion, gun control, racial tensions. In six episodes, TCS has explored a surprising myriad of issues but has mostly disconnected them from characters by using their points of view as talking points. In these two episodes, those talking points are used to provide avenues into exploring characters further, like Cynthia’s cold feet about marrying Joe, or Maxine refusing to fit into any stereotypical box someone tries to place her in, be it as a secular person, a light-skinned black woman, or someone who hates guns because it’s trendy right now. Her character in particular really benefits from the approach these two episodes take; while they still present her as the outsider to the strange (though very familiar) Carmichael family, her character is given new dimensions in both episodes, as the stories integrate her (increasingly informed) debates with Jerrod and his parents the further we go into each installment.

The actual morality play of both episodes is pretty level-headed; unlike previous installments that held society to task for various things, these two episodes posit that both religion and guns are dangerous, powerful weapons, and should be handled at best with extreme care, if at all. However, both “Prayer” and “Guns” are effective as previous episodes, because of how well these characters feel informed, defined beyond the one-dimensional points of view most sitcoms reduce its characters to – throw in stories where Jerrod admits to praying and owning a gun, and these two episodes become the most subversive half hours of comedy I’ve seen on network television in a long, long time. And they enter these controversial topics so effortlessly, with such an evenhanded approach, even in the setting of cartoonish sitcoms that it’s really quite an impressive thing to see, one subtly hidden behind the curtain of canned audience laughter and low-budget set design of a decades-old genre.

Given that, it’s no surprise TCS has caught on with audiences (family audiences) so well in its brief time on air. There’s a ton of potential for The Carmichael Show to really revitalize the multi-camera sitcom, potential that really shines through in these last two episodes. As it did two decades ago when the decision to renew Seinfeld came up for the first time, NBC has an important decision on their hands with The Carmichael Show: see what the potential of this show may hold with a second season renewal, or give up on an extremely ambitious show just starting to find its footing in a slippery, often ridiculously predictable genre. Give Carmichael a chance, NBC: “Prayer” and “Guns” are both strong suggestions you won’t regret it.