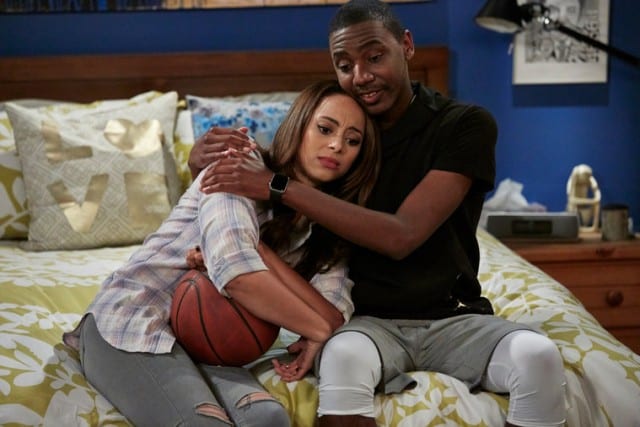 The more The Carmichael Show pulls apart and reforms the traditional sitcom formula, the more intriguing it gets. Like the show’s first two episodes, “Kale” and “Gender” both use fairly innocuous opening scenes to set up very interesting discussions about health and gender identity, two topics that aren’t being discussed on any other sitcom unless they’re desperately trying to get attention. With “Gender” in particular, The Carmichael Show‘s ideas and priorities feel more fully formed, a show less trying to posit itself as some beacon of progressive ideals to be admired, and more a show examining how a format, and two entirely different generations, find their place in a rapidly changing world.

There’s a reason The Carmichael Show isn’t called The Jerrod Carmichael Show: it’s as much about Jerrod’s parents as it is him, which is where the show’s reflections on society come to life. As much as Maxine becomes a three-dimensional character in these two episodes (her “pedophobia” chief among them), her relationship with Jerrod is established pretty early on as a healthy thing, which means the conflict has to rise from somewhere else, giving room for the generational gap The Carmichael Show is fixated on. In “Kale,” Jerrod’s attempts to get his father to eat healthy provide an avenue for a number of intriguing ideas, from the disturbing trend of the worst food being the cheapest, and the most heavily marketed towards lower class and minorities (when was the last time you saw a white person not working behind the counter in a McDonald’s commercial?), to the reluctant attitude of an older generation to a younger generation trying to assert their intelligence and tell them what to do with their health.

This is really an important conversation for a family sitcom to have, and yet, how many even attempt to do it? More importantly, how many do it in a way that doesn’t feel preachy and saccharine? When other shows examine these generational conflicts, there’s often a fix-all solution or a simple compromise to be made in the course of 22 minutes. What The Carmichel Show realizes is that there is no easy solution, either in the real world or the surreal world sitcoms exist in. Ingrained attitudes towards food are hard to change in anybody, young or old – even Jerrod eats waffles in the middle of the night when he’s stressed, a totally unhealthy habit I can identify with – and doubly so when it’s a son trying to tell his father he’s concerned about his health (“What about your grandkids? … I’m speaking hypothetically, Maxine!”), which The Carmichael Show doesn’t back away from. Yes, the two come to an agreement when Jerrod points out that he’s not done with his father yet (a very powerful statement) – but if you notice, Joe never says he’s going to up and change his entire lifestyle. He probably won’t, and the show knows that, but even knowing he’ll give it a halfhearted try is enough, a brief, valuable moment where Jerrod and his father finally identify and connect with each other (which in the end is more important than health, because ultimately, we all die).

Even more impressive is “Gender,” where Jerrod becomes a big brother to a young basketball player who identifies as a woman and is afraid to tell anyone. This is the most interesting, nuanced episode of TCS so far (though with the last two episodes being named “Prayer” and “Guns,” I see the bar being raised in the near future), ultimately coming to the conclusion Jerrod doesn’t know how to handle this situation, one that society as a whole is still struggling to figure out. What’s most interesting about “Gender” is how it explores the differences in confusion between generations, and how the void between parents and children isn’t so dissonant after all: our parents and grandparents are just unable to keep up with the rapid advances in everything from technology to sexuality in the modern world, which at some point we’re all victim to fall to (for me, it’s when I see people riding these ‘hoverboards’ – I just don’t get it!). And for those that pride themselves on being open-minded and open-hearted, being unable to understand something causes tension and self-doubt. That is, until you’re old and realize that you don’t care about any of it any more, and people should just do whatever they want (or in the case of the most ignorant and hateful, they just get old and die).

Ultimately, “Gender” determines the most important thing is empathy, delivering a slightly on-the-nose monologue about being able to empathize with the things we don’t understand. The word “support” is not the same as “understanding,” “agreeing,” “imitating,” or “judging” (Jerrod tries to compare selecting a gender like putting on a velour suit, which the student calls out as BS) – it just means supporting, which is what Jerrod offers his confused middle schooler. And that’s all we can do. Cynthia may not believe in Maxine and Jerrod living together unmarried, but she still welcomes Maxine into the family (even making a not-so-great verb out of her name) and is willing to accept that Jerrod and his girlfriend are going to make their own decisions about their life. It’s so simple – she can hold her religious beliefs, and Joe can continue believing that Caitlyn Jenner made a grave mistake in not choosing the name Carol Ann for her new identity, without having to further complicate the difficult journey Jerrod’s Big Brother, Little Brother “sibling” is embarking on.

The key idea is tolerance across generations, and as The Carmichael Show tries to explore the complicated inter-generational dynamics on important cultural issues like health, race, and sexuality, “Kale” and “Gender” both find a pathos the first two episodes didn’t effectively convey. The sitcom is the “old” format, the “traditional” material people the age of Jerrod’s parents will see as familiar and comfortable. Jerrod and his girlfriend are much more aligned with the thinking of modern, single-camera comedies, adapting progressive ideals and living in what many would still consider a “non-traditional” lifestyle (for a comedy, at least). TCS is about using the differing priorities and philosophies of these two generations to reflect on a number of important issues, pointing out how ineffective we can be at bridging the gap between the two. While it may never be a show that can capture enough of an audience to become a big hit, The Carmichael Show‘s uncovered something with this particular twist – and as it heads into the last two episodes of its brief initial run, I’m extremely intrigued to see how it ultimately realizes this vision.