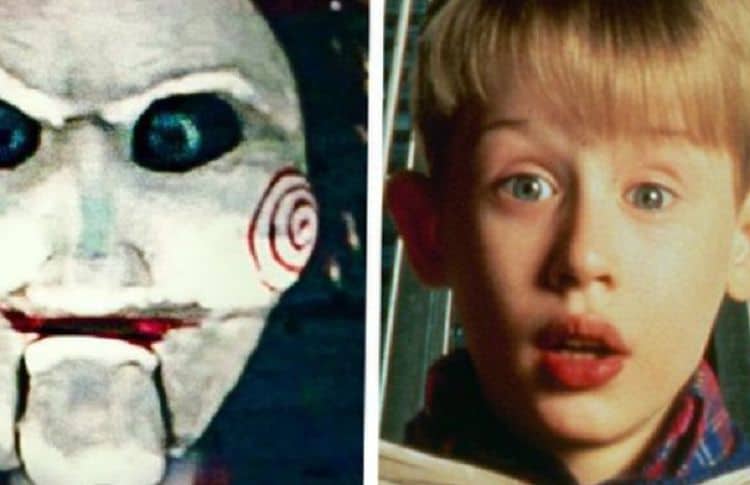 Yep, we’re still on this theory of Kevin McAllister being related to Jigsaw, or rather, Kevin BEING Jigsaw. But this time around the theory is that James Wan likes it and the two look enough alike so it must be true. Cue the eye roll as we move on since the idea that Kevin is Jigsaw isn’t hard to believe since the designs of their traps are fairly diabolical and are designed to do as much damage as they possibly can unless the people encountering them can somehow slip through them and outsmart the person making the traps. With Kevin’s traps the ability to simply look before leaping is still there, since Micro Machines on the floor, Christmas lights and ornaments on the floor, and various other traps would be easy enough to avoid if a person simply went around them or took their time and went slowly. But if you have the intellect of a can of paint like Marv and Harry, then you might end up getting pretty beaten and bloodied by the time all is said and done. But imagining that Kevin might get better with his traps as he gets older is feasible, though in Home Alone 2 it’s easy to see that while he’s diversified he’s still not working against individuals that have managed to gain that much intelligence. Sure, they were more cautious, but missing a giant hole just inside the front doors and not seeing a sack of wrenches tied to the ceiling outside of the side door kind of eliminates the idea that Harry and Marv were any wiser than they were the previous year.

But in terms of damage done, Kevin’s traps weren’t quite as mean-spirited as Jigsaw’s, though they did manage to inflict a good amount of damage that should have killed the two robbers a few times over. Jigsaw’s traps were actually escapable and weren’t about doing the maximum amount of damage unless one wasn’t willing to sacrifice a bit in order to live. In other words, the traps set by Jigsaw were set in a way to make people value their lives by showing that they could sacrifice in order to keep them. That is, up until the traps were no longer being set by Jigsaw, since if anyone remembers, there were a couple of traps that couldn’t be escaped and were simply meant to punish, not teach. Even Jigsaw wasn’t above doing this since the junkie that caused his wife to have a miscarriage was treated to the horror of having to push knives forward with his face to gain his freedom, and in doing so escaped, but was then allowed to run headfirst into a barbed wire bramble when Jigsaw moved aside from his headlong charge.

If we’re going to say that Kevin eventually became Jigsaw then we really have to point out that Kevin was a psychopath from a young age, meaning that he wasn’t bound to see his fellow human beings as anything but potential victims that might be his friend one day and his worst enemy the next. He had a sense of right and wrong, but he didn’t care. The traps he continued to devise as he grew to his old age started out simple, easy to move around, easy to defeat, but eventually became a little tougher, a little more diabolical, and a lot deadlier since he stopped messing around and meant business. Of course, when he really got going he might have had a crisis of conscience and backed off for a while, at least until his wife was injured, at which point he really started in and began to take his traps to a new level. If you’re wondering, of course this is all conjecture and storytelling, since the theory is the same thing, telling a story that we think is interesting but doesn’t fit with the timeline we know of both characters. But it’s still a lot of fun to sit here and think of what could be since it would mean that Kevin was bound to become a seriously damaged individual at some point if he wasn’t already.

One theory that hasn’t been floated much but would still work anyway since the character died would be using the character of Henry Evans, who was also played by Macaulay Culkin, from The Good Son. Unfortunately, Henry fell to his death near the end of the movie. But what if he didn’t die? What if he somehow survived and made his way out into the world on his own? That would certainly create a character like Jigsaw, wouldn’t it? In the spirit of creating fun theories that’s one that certainly has some merit, but it would involve a lot of ‘what ifs’ that would create plot holes big enough to drive a truck through. It’s still fun to think about though.