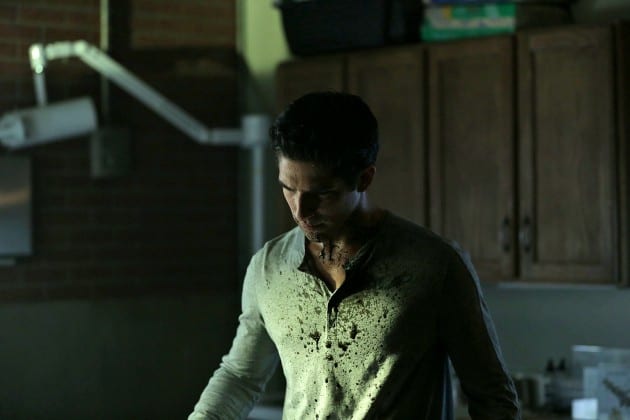 This week’s review of Teen Wolf is coming to you from yours truly, the author of this past season’s American Idol reviews. I am stepping in to cover this show for the week, and I’ve never reviewed a non-reality show before, so apologies now if it’s off point.

The episode begins with Scott and Stiles at the police station helping Sheriff Stilinski prepare for a date. We are introduced to a random angry teenager, Donovan. (He seems to take the teen angst a step further than any of the kids that hung out with Dawson down at the Creek.) Donovan vows to kill Sheriff Stilinski, and is escorted from the building with his lawyer and two officers. He is transported in a van where the driver appears to experience heart attack-like symptoms. The van accelerates as the driver loses control, and a mysterious gel-like substance begins dripping through the roof of the van. We learn that Tracy, Little Miss Night Terrors from last week, is behind all the strange things happening, and one of the officers is her father. When the van is stopped, Tracy attacks; she kills Donovan’s lawyer, as both deputies are mortally wounded by her. Donovan flees out the back of the van. He runs into random creepers with masks (can you tell there’s a reason I don’t review shows with actual characters and plotlines? I sometimes miss the boat on what’s actually going on…) and meets the wrong end of a high-tech power drill. He really gets screwed, right into his ear.

Our next scene shows Lydia and Kira on a night drive with Malia, in what appears to be a lesson in driver’s education. I guess in a town like Beacon Hills, it makes perfect sense to learn to drive under the light of a full moon. The girls arrive on the scene of Tracy’s attack, along with Scott. Scott flees the scene to find Donovan (complete with an impressive dismount over a garbage can that would make even Buffy jealous), and finds him alone and scared, repeating Tracy’s name. His head is strangely still functioning, after having his ear drilled into.

Next up we get Scott in his AP Biology class, where Liam tries to get his attention from the hallway. He uses werewolf whispers to let Scott know that Tracy is there at school, sitting in history class. We see Tracy, dazed and confused in the back row of that class, barefoot and clawing at her desk, causing the fluorescent lights to flicker. Everyone seems to be oblivious to her presence, except the girl next to her who finally says something as Tracy begins to bend her desk in half. The fire alarm goes off, an attempt by Scott to clear the area and isolate Tracy. As Scott, Liam and the teacher move toward Tracy as everyone else has fled, Tracy sees them as the random creepers as they approach her. She mutters “They’re coming for all of us,” just before she collapses to the floor, with silver metal goo oozing from her mouth.

Scott brings Tracy to Dr. Deaton’s vet office, where she is laid out on the table. While Malia would like to see her laid to rest for good, the good Doctor and the boys want to find a way to help her. Meanwhile, Kira and Lydia are at Tracy’s house in her bedroom looking for answers. Back in the Doc’s office, Tracy’s body begins acting strangely, and splits open down her back. As she’s literally cracking up, a black substance is spit onto Scott, Doc, Stiles, and Malia, paralyzing them. As Tracy grows a tail, it’s clear that she’s a Kanima, in the style of Jackson (Colton Haynes) from Season 1.

There’s another side story involving Liam, his gay best friend, and an Abercrombie werewolf jock, but I don’t exactly know what’s going on there. Abercrombie threw me off my game. Malia is the first one to regain feeling in Deaton’s office, and she sets off to go and save Tracy.

Back in Tracy’s bedroom, Lydia and Kira realize that Tracy is hurting all the people in her life who have tried to help her. In a panic, they realize her next target is probably Lydia’s mother, who offered Tracy help during last week’s episode.

Sheriff Stilinski and Mrs. Deetz (I actually don’t know her name, but I like the character Lydia Deetz from Beetlejuice, so the nickname for this Lydia’s mom seems fitting) return from their date to the station, only to find everyone there paralyzed. (Classic Kanima.) Lydia and Kira show up at that exact moment, to warn of what’s about to happen. Tracy is clinging to the ceiling, ready to attack. Kira transforms in to some sort of Thundercat ninja warrior engulfed in flames, and chops Tracy’s lizard tail off with her samurai sword.

Back at the vet’s office, the new werewolf from fourth grade shows up to help, but we all know there’s some shady shade going on with that one.

Malia arrives at the station to find Lydia wounded and bleeding, the sheriff paralyzed, and Kira trying to control the situation. Tracy has dragged Mrs. Deetz (again, not her real name) to the basement. Malia gets ahold of Tracy and puts her lizard face in a choke hold, and…

Sorry, that’s all I got. Dish Network likes to make my life miserable sometimes, and I don’t always get the end of my shows. There wasn’t a new episode of Wolf Watch to air after, so I didn’t get a chance to catch the end of this show on the beginning of that one… so I have no idea how it ended, and worse, I didn’t get scenes for next week’s. Rude.

Teen Wolf Trivia: Tyler’s Posey’s father in real life, John Posey, was the original Danny Tanner in the Full House pilot, before being replaced by Bob Saget. Sheriff Stilinski will always be Dr. Brett Cooper (“Coop”) from Melrose Place to me, and why did the Scavo twins of Desperate Housewives leave this show?

Also, that was a little stressful writing a review for a show other than Idol. Props to anyone who does it regularly.