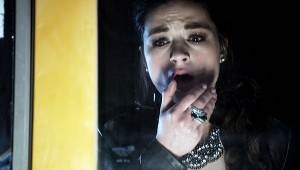 Last night’s Teen Wolf still has my mouth on the floor. I’m having a hard time trying to type and keep my jaw in place, but I will manage both tasks to discuss this epic episode with you guys. There is so much to discuss that I don’t even know where to begin, so I’m just going to jump right into the thick of things.

Not only did Allison find out about her heritage and birthright, she also accidentally found out about Scott’s own secret as well. To make matters worse, Allison found this out right after she and Scott finally reconciled after Scott told her how much he loved her. Talk about heart-ripping stuff!

The opening scene with Allison driving and replaying her conversation with Kate was a brilliant blend of writing, acting, and direction and Crystal Reed simply owned tonight. Allison’s earth-shattering revelation that Scott is the beast in her weird fairy tale had me seriously wanting to take the girl home and console her, because she’s on the verge of snapping into a split image of her aunt Kate… which leads me into the next shocker of the night.

Kate and Derek are PAST LOVERS?!

Talk about totally unexpected. I mean the chemistry between Derek and Kate was there all along, but now it 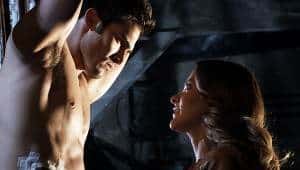 makes sense why it was there in the first place: They’ve already experimented with each other!

Not only that, but Derek has some type of connection to the Hale house fire, which could explain a lot of things if you look at the big picture, namely Derek’s reasoning for falling into rank with his Uncle Peter’s plans (besides trying to take him out on the side). Derek’s guilt has probably been what has been driving him all season, either to cover up his involvement or to make amends for his past mistakes. I bet when Peter finds out about this little connection with the Argents, he’s not going to be howling in joy. Or, maybe Peter already knows and wants to secretly take out Derek himself. Dear God, the possibilities are endless!

As for the relationship between Kate and Derek, wonder if it truly was history repeating itself? Was Kate an innocent doe-eyed girl who fell in love with a werewolf like her niece? Or was Derek the gullible werewolf who fell into Kate’s trap? Hmm…

Jackson’s a Turncoat and Get’s Lydia Hurt in the Process!

I knew Jackson was a weasel in Abercrombie & Fitch clothing, but seriously where is this guy’s mind at? He has serious “All or Nothing” syndrome and it has gotten to the point where he thinks being a werewolf would be the top prize to secure his quest for ultimate dominance. Yea, he might have the attributes of an “alpha” male, but there is a huge part of me that tells me he wouldn’t live up to the role. I know I’ve said it before, but I’m just reiterating my opinion. 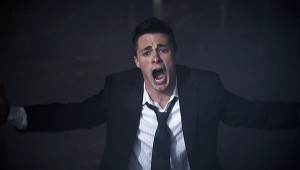 Now, let’s get on how Jackson sold out Scott to the Argents’ in exchange for nothing. After Scott saved this man’s life and taking a bullet for him, you would think Jackson would be more buddy-buddy with his fellow lacrosse co-captain. But nooo… Jackson had to get back at Scott for scaring him into taking Allison to the dance, because his ego was bruised. Hopefully, Jackson won’t think that he can still join Club Howling after that little lapse in judgement. Plus, Mr. Argent knows exactly what Jackson is truly searching for and will no doubt keep an eye out on Jackson to see if he follows through with his quest to become a wolf.

Then there is Lydia. Poor, poor Lydia, who just wanted to be loved (by a Neanderthal jock) and ended up getting seriously hurt in the process. Even though Peter considered Lydia being a part of Scott’s “pack,” I still think that he gained nothing in hurting the girl, besides getting answers out of Stiles. Will Lydia be the one who doesn’t make it out human? Peter did bite her after all, but will she survive her wounds? I seriously hope so, because we need to see more of her with Stiles. I see a Summer Roberts/Seth Cohen thing with these two and she could prove hella useful in the future given how smart she is. Fingers crossed.

The Man of the Hour

Scott might not be able to be everywhere at the same time, but he will surely die trying to do so. One thing you can say about Scott is that he’s resourceful and can seriously think on his feet. He fooled Peter twice and you have to hand it to the guy for using Danny as a pawn in getting their lacrosse coach off his back during the dance. With quick wits like these, how can you not like the guy?

Which brings me to Scott and Allison making up in light of all the tragic drama in their lives. Bad timing 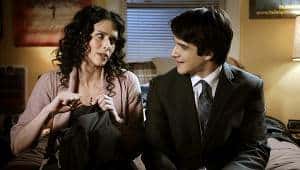 much? However, Scott had gotten built up the guts to tell Allison the truth, but she unfortunately was only looking to have some sort of normalcy in her life and I doubt him telling her about his “condition” would cause her to swoon at that moment.

Now that the Argents and Allison know about Scott, the finale is going to be all types of suspenseful, mostly due to finding out what Allison will do now that she knows the truth.

What The Hell is The Vet?!

Okay, so the Vet wasn’t the Alpha, but does that mean he’s the other Alpha? I ask this question after talking to TVO’s forums moderator Pixie Wings, who believes The Vet is the mythical second Alpha that has been rumored since the beginning of the season. However, I don’t think Scott’s boss is the other Alpha due to the guy using mountain ash to secure his office, which he himself would be allergic to. Although I could be totally wrong, especially since that chair splintered into a million pieces once Peter lunged it at the Vet. When it is all said and done, the Vet has to be some sort of supernatural creature and I am totally ticked that we didn’t get a clear-cut explanation as to what he actually is. I hope this is solved next week in some capacity, because the mystery of the Vet is killing me!

So that’s all I have for now. Hopefully, I can get back to you guys with more during the week or maybe even this weekend. What did you think about tonight’s Teen Wolf? Are you upset or happy about the finale next week? Or both?

See you next week!