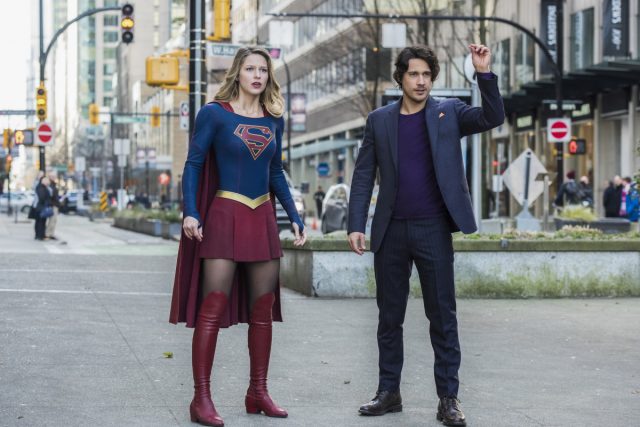 With Valentine’s Day recently passing, Supergirl has decided to provide it’s take on the holiday and how all of these characters handle it. A lot of the times, holiday episodes like “Mr. and Mrs. Mxyzptlk” can feel very, very cheesy, which Supergirl is; however, it still finds ways to incorporate meaning into the episode. While at times Supergirl can feel like it’s trying to do a little too much with it’s characters at once, the show utilizes Valentine’s Day to establish where everyone is at and set them up on a long term romantic path. Luckily for the show, it’s in a great position to really tackle a Valentine’s Day plot with the ability to keep things fun and relevant.

The biggest thing that Supergirl has been building towards is Kara and Mon-El getting together, which finally happened! Chris Wood and Melissa Benoist have great on-screen chemistry with one another and both of the characters they play have felt natural in their road to officially being together.  “Mr. & Mrs. Mxyzptlk” is a really fun way to sort of kick off their relationship because it helps to get some basic conflicts out of the way going forward. The characters fit nicely together, yes, but that does’t mean they won’t face times where their personalities clash, and Mr. Mxyzptlk is a great vessel to put that on immediate display.

Kara and Mon-El’s situation becomes a little tougher because they have to work together and are jumping into an unusual relationship setting, so the success of their relationship is really going to depend on Mon-El stepping up and both he and Kara learning to respect one another’s individual ideas and decisions. Though in this one case, Mon-El’s jealousy and frustrations are pretty justified; the poor guy is about to finally kiss Kara and get the girl he’s falling hard for only to have the moment interrupted by an annoying fifth dimensional being with greater powers than his own. However, at the same time everything Kara discusses throughout the episode is also valid, about love being when you put someone else’s needs above your own. In a way, Mr. Mxyzptlk helps Mon-El out a bit here because he makes it clear that Mon-El just has to trust in Kara’s feelings for him and know that she loves him for being him, not his powers.

This is where Supergirl does a nice job with the episode though, because Mon-El has been a interesting character addition to season two of the show. The character has been a lot of fun, but within certain episodes the plot the writer’s have given him feels like he is taking steps backward and actually regressing at points. There have been a lot of minor struggles between he and Kara that have sometimes felt repetitive, but it’s clear in “Mr. & Mrs. Mxyzptlk” that Mon-El finally seems to truly grasp what he will need to change in order to show Kara that he does listen to her.

Supergirl also incorporated Winn and Alex into the Valentine’s Day picture, and once again, handled the characters and their respective situations really nicely. Winn hasn’t really been given a serious romantic interest since the show’s first season and while he’s had a couple of short flings here and there, the poor guy is constantly dealing with losing people he develops feelings for to ridiculously unnatural situations. The decision to introduce Lyra in this episode was a surprising, but nice addition. The two characters have a really great dynamic already and it feels fitting that Winn’s charm would mesh with a very dominant female. “Mr. & Mrs. Mxyzptlk” develops their connection in a really cute and fun way, but by their full Valentine’s Day dinner date it’s actually sweet to see Winn’s confidence shine through in having no problem with going on a date with an alien in public.

As for Alex, she has a much more complicated situation with Maggie due to the couple being together for a little longer. Alex’s reasoning behind her excitement for celebrating Valentine’s Day was awesome; she has never been able to have a real and open Valentine’s Day with someone she loves. The character has been repressing her true sexual orientation and is finally in a relationship that is real and worth celebrating. At first, Maggie’s response to Valentine’s Day felt very generic; her being a cop who is too tough to buy into a cookie-cutter holiday. Yet, Supergirl twisted the idea and utilized the idea to give some really great insight into Maggie’s personal life and past.

The choice to reveal that Maggie lied about how she officially came out to everyone was shocking, but also powerful. For one, to discover the character lied as a means to encourage Alex more and fill her with confidence is a very noble gesture. The view into her past and the disapproval her parents showed towards Maggie’s sexual orientation is heartbreaking but only proves how strong she has become as a person. While her reaction to Alex’s Valentine’s Day surprise still felt a little aggressive and abrupt, it was nice to see Maggie’s character show a more vulnerable side and to hear how much it related to their relationship. Their end resolution was romantic though, and as a couple Maggie and Alex are growing very organically.

Overall, Supergirl really did nail the use of a Valentine’s Day themed episode and used the holiday to it’s advantage rather than producing something that was corny and cheap. “Mr. & Mrs. Mxyzptlk” was smart to use a more obscure character in Mr. Mxyzptlk as an antagonist to further the titular character’s relationship. The stories all felt normal and natural and it was fun to watch each character go on their own little Valentine’s Day excursion. Luckily, Supergirl was just in the perfect position to tackle these relationships that have been more up in the air and nail down a long-term state for the characters before season two’s major villains finally arrive and start causing problems. It was nice to see Kara use J’onn’s advice to outsmart Mr. Mxyzptlk because it was always going to be individually stopping him, with Mon-El’s jealousy getting in the way. Hopefully the Kara, and everyone else, can all find some happiness before facing what will probably be their biggest challenge yet.

* Hamilton v. Burr duel… I see what you did there.