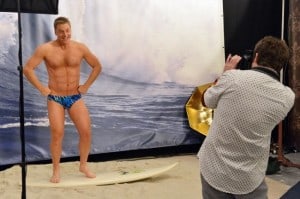 One afternoon, George and Dallas are having lunch at the club when Javier inquires about the Dads of Chatswin charity calendar. Every year, Mothers Against the Defamation of Undiluted Apple Juice showcase 12 men of Chatswin in beefcake photos, with the one deemed the hottest getting to represent December in a two-page foldout. Dallas laughs off the idea of George doing something fun and silly like that, only for him to sign up on the spot and attempt to put himself outside his comfort zone.

Despite warnings from Noah and Fred, George stays in the hunt for the Decemberfold, drawing generally positive remarks at the interview with MADUAJ, though they think his lack of body definition makes him more of a March than a December. However, George doesn’t let that stop him from going on a crash diet over the next couple of days in preparation for the shoot, as he tosses any fattening food in the house and stresses over calories on a night out with Dallas. The following evening, they try to go see a movie that ends up being sold out, although George thinks sitting for a movie will be harmful to his metabolism. As he wears a garbage bag and jogs outside the theater, Dallas tells him that she wouldn’t mind if he got hit by a car, he’s acting so strangely.

George has no time to worry because before he knows it, it’s the day of the shoot. He won’t be finding out what month he is until the reveal party, so each of the men selected will have to go through multiple photo shoots during the day. While Noah plays surfer and Fred pays homage to Titanic, George works in a sausage factory before all three are brought together for a little butt-to-butt action and “Me So Horny”. George ends up getting to be Mr. December dressed as a sexy elf, but the one person he wants to be there to share in the joy (Dallas) isn’t. He then goes to her house where the two make up and share in her favorite pie, since he’s starving.

Don’t Run Away, Don’t Run Away
Noah’s daughter Jenna is in from college for a short time, meaning that she and Tessa can hang out and bond even more. The two have become friends recently and now would be a good time for them to really get to know one another, but Tessa can’t seem to shake Dalia from her tail. After she finds Tessa and Jenna hanging out, Dalia immediately latches on to Tessa and tries to be extremely nice. The following morning, for instance, she’s already at the Altman house when Tessa wakes up; she drives Tessa to school, even letting her change the radio from Wiz Khalifa; she compliments Tessa’s growing popularity, choice of salad at lunch, and manner of clapping during Lisa’s a cappella scatting.

This raises a major red flag for Lisa, who then makes it her mission to find out just what Dalia had planned for her best friend. She tells Tessa about how due to being falsely accused of stalking Dalia in 9th grade (pre-human friends), Dalia blocked her from every social media account she had, meaning that she wouldn’t be able to gather information this way. Until, that is, she created the false identity “Lars Lissol” in order to get Dalia to approve a friend request, which she does. It turns out that Dalia’s been documenting every experience she has with Tessa on her social media accounts, but rather than plot revenge or do anything drastic, Tessa decides to confront her directly.

Dalia admits that there was jealousy over how close Tessa and Jenna had gotten and that she wanted to be good friends with Tessa, too. However, later, Jenna admits the real reason that Dalia was so upset to find the two of them hanging out – two Thanksgivings ago, she and Dalia hooked up. It started out as hate hooking up and only lasted for a few encounters, but according to Jenna, Dalia’s been a head case since then, content to text pictures of Evan and flaunt her new relationship to the Brown student. Dalia’s upset about having been caught and does a little catching of her own when she finds Lisa snooping through her room one night.

A drawer full of pictures of Dalia and George.

Additional thoughts and observations:
-“I’m gonna go hit the showe-showe.”
-“Hey, lesbians.”
-“I’ll go check on the undercover butter agenda.”
-It’s probably bad that I’m not a fan of them giving Dalia’s lesbian jokes subtext. It’s a little cliche and part of what makes stuff like her lesbian catering venture monologue funny is how left field it can be.
-My TV is awful, so I couldn’t read what each of Dalia’s pictures said, but does she have a crush on Daddy Altman now? For a show that overcorrected to the point of damaging itself when faced with Jane Levy and Jeremy Sisto’s chemistry during season one, going to this well is a bit frustrating.
-That entire last scene featured a strange Kelly Clarkson musical cue that I still don’t understand. That’s not what the song is about, show.
-The only way Lisa knows Jenna Werner is from a tragic birthday party incident that involved vomit and a dog.
-I’ve mentioned this several times in past reviews, but tonight’s episode feels appropriate to bring it back up: Jeremy Sisto is super foxy. Not Hollywood hot – normal-guy-you-met-at-Walgreen’s-who-took-you-to-see-Iron-Man kind of hot.
-Will we see the return of Lars Lissol next season? I hope so.
-Next week on Suburgatory: Ryan begs Tessa to decide the college he’ll go to, while George asks Dallas to move in with him and newly licensed realtor Sheila sells the Altman house before it hits the market.