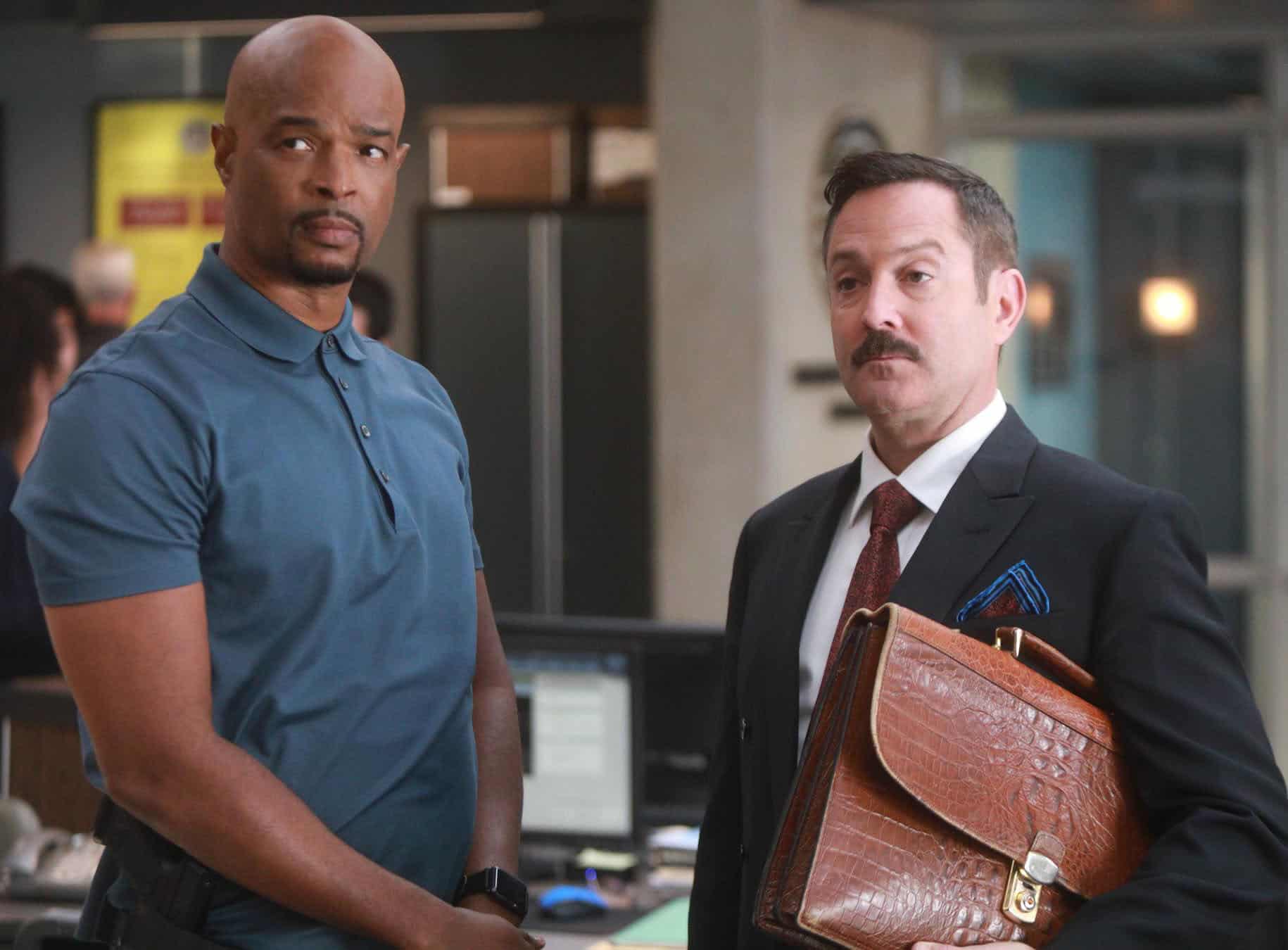 On this Week’s Episode of Lethal Weapon Riggs and Murtaugh work with Leo Getz to solve the murder of his best friend and childhood memories resurface for Riggs.

The episode opens with Howard Trotter placing a bet at the racetrack. He gets scared when he see’s someone that he recognizes. When he realizes that the horse he bet on is winning he goes closer to the track. Soon after he gets there he is injected in the neck with something and as he is dying the horse that he bet on wins.

In the meantime Riggs wakes up on the beach to find that his trailer has been towed by the City. While Trish and Murtaugh are discussing the fact that he has not finished his will, Riggs shows up and he is upset that the City towed his trailer and Murtaugh asks Trish to help him.

When Riggs and Murtaugh arrive at the crime scene they find Leo Getz (played by Thomas Lennon) there. Leo tells them that Howard Trotter was his best friend and he was murdered. Baily tells them that all the witnesses say that he collapsed and had a stroke. They find out that Leo was right when they go to see Scorsese at the Coroner’s office. He tells them Howard was injected with poison.

While they are at a Memorial Service for Howard, Murtaugh asks Riggs to be in his will but he declines. When they get to Howard’s apartment they find that his lucky baseball bat (supposedly signed by Sandy Koufax) was stolen.

When Riggs and Murtaugh begin to argue over the fact that Riggs declines Murtaugh’s request for him to be in his will, Leo asks them to go outside. While Leo is inside alone he is attacked by a man hiding in Howard’s shower and has no choice but to kill him.

When they get back to the station Baily tells Murtaugh, Leo and Captain Avery that the man Leo killed was named Alex Olea. He was at the racetrack when Howard was killed and he was an enforcer for a loan shark named Tony Guzman.

Riggs goes to see Dr. Cahill and she tells him because he brought up his Dad last week she looked at his files and found out that he moved a lot as a kid. Riggs quickly shifts the conversation and says that his Mom died when he was a kid and his Dad did the best he could.

Riggs has a flashback of his Dad beating the lock off the door of their house with a baseball bat after they received an eviction notice. When Trish comes to tell him there is nothing she can do to get his trailer back, he says he will figure something out.

Riggs and Murtaugh go to the Tattoo Shop Guzman owns. They find the baseball bat that was missing from Howard’s apartment. When they suggest that Guzman had Howard murdered, a fight breaks out. Murtaugh gets cut with a tattoo gun and Riggs can’t stop himself from hitting Guzman with the baseball bat.

Back at the station Guzman says that he didn’t kill Howard because he owed him money and dead men can’t pay. He also says that Howard told him that he came into a windfall the day before he died.

That night Riggs sleeps in his truck next to the Police Station and has another flashback of hiding in the trunk of a car to get away from his Dad.   Meanwhile Leo, Baily and Detective Bowman go back to Howard’s apartment looking for any evidence of the windfall he was referring to. They find a bunch of recordings from the racetrack and figure out something that he heard is probably what got him killed.

After pulling the security video from the Jockey Club, Leo realizes that four of the people that were at Howard’s Memorial were together at the Jockey Club even though they hated it.

Leo goes to see Murtaugh and while they are talking Riggs drunkenly crashes into his fence with his trailer. The next morning Riggs tries to apologize to Trish but she is not having it.

Leo receives Howard’s ashes and takes them to the Club. After being caught putting them in a potted plant, Leo get’s escorted out and is kidnapped by Shane Plyskin who is dressed as a Security Guard.

At the same time Riggs and Murtaugh break into the Bar where Howard’s Memorial service was held and find a hole cut into the floor of the bathroom with a ladder down inside. Shane’s crew robs a bank and Muratugh and Riggs follow after them.

When Murtaugh realizes that Leo has been kidnapped by Shane Riggs and Murtaugh split up. While talking to Shane, Leo figures out that Howard asked for money to keep quiet about the robbery plan of Shane and his crew.

When Murtaugh finds Leo and Shane, Shane has Leo at gunpoint. Murtaugh emphasizes to Leo to let Howard go. Leo quickly realizes what Murtaugh means and throws the Urn in the air causing ashes to go everywhere.

At the very end of the episode Riggs rebuilds Murtaugh’s fence and tells Trish to tell Murtaugh that he will be in his will.

overall I think this episode was fuuny, heartwarming, and action- packed

This weeks episode of Lethal Weapon was was fuuny, heartwarming, and action- packed.