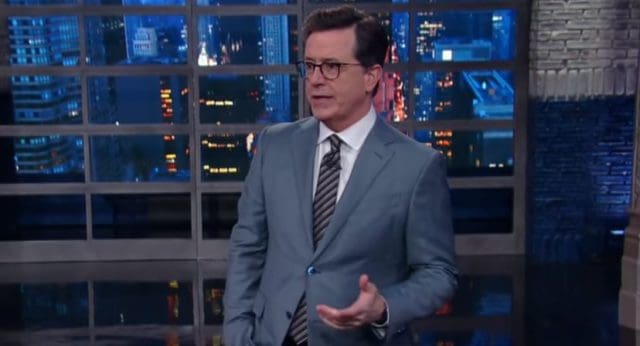 Not that Stephen Colbert would ever run out of material on Donald Trump but this week he’s gotten a little extra boost because of Trump’s out of country visits.Â  First it was Trump going to Israel where the subject wasn’t Trump actually visiting the city of Jerusalem but the fact that Melania Trump kept avoiding shaking his hand.Â Â  Then Trump headed over to Italy to visit the Pope.Â  There, Melania still avoided holding his hand until they were in a church where she finally succumbed to his small hand.Â  To add insult to injury Pope Francis gifted Trump with a encyclical about climate change.

But those were the easy parts.Â  Every late night show under the sun was reaming the President for all of that stuff.Â  However, another nugget landed in Colbert’s lap.Â  It was Donald Trump’s new budget and the egregious error of a measly $2 trillion.Â Â  Colbert decided he would take a stab at analyzing this budget and testing our President with some simple math.Â Â  With Trump’s budget showing a $2 trillion error, Stephen tests the President’s arithmetic skills with an elementary-level math pop quiz.