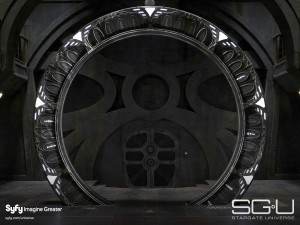 Stargate Universe airs its final episode tonight on SyFy and I felt that it was a good time to stop and sum up the last few episodes before giving the show the goodbye that it deserves.

If you’ve been living under a rock since December, SyFy canceled the latest Stargate spinoff due to low ratings after it was moved from its Friday time slot to Tuesdays where ratings were not favorable. When the show returned this spring, the cable network then moved it to Monday nights where ratings fluctuated, but it was too late since the show had already been given its walking papers. In the aftermath, the entire Stargate franchise was put on an indefinite hold, snuffing out fans’ hope of ever seeing their favorite characters from the Stargate franchise ever again. So tonight marks the end of not just one series, but the future of the franchise as a whole.

The last few episodes of SGU exemplified some pretty good storytelling, namely with the two-parter featuring the descendants of the alternate Destiny crew and how they settled on the planet of Novus and started a whole new civilization. Everyone knows that since the show came on, I’ve been wanting for Icarus Survivors to find their way back home whether it was in the middle of the series or in the last frame of the series finale. However, after viewing both “Common Descent” and “Epilogue,” I would have been content on the crew settling down and forming a new civilization amongst themselves. If you take away the time travel and duplicate crew members, “Epilogue” could have served as a fitting series finale and ending for the journey of the Destiny crew. I say this because by watching the episode, I felt that the crew truly achieved the one thing they couldn’t do while they were on the Destiny. They successfully coexisted and managed to find “home.” I know that’s sappy and all, but wouldn’t you agree that “Epilogue” would have served as a better conclusion than what could possibly be a cliffhanger with tonight’s episode? Anyone?

To me, “Epilogue” was the best episode of the series, but that might change in a viewing of the entire series as a whole. The final image of Camile Wray as the sole survivor of the Destiny crew was very ironic and yet it fitted for me. Watching Camile speak to the descendants of her friends and colleagues in the final moments of “Epilogue” clinched the series for me to the point that I’m scared to see how the show will actually end tonight. Again, it would have been an apposite way to close the series and, in some respects, the entire franchise with some tweaking in terms of the plot and storyline, because the crew of the Destiny had a decent ending and maybe a scene or two could have showed what happened to the Lucian Alliance attack back home. Who knows? All I do know is that I have a serious aversion to abrupt endings to certain TV shows and, again, I feel that we will be left dangling on the edge of space when the final frame of SGU airs later tonight with no one to help us up in the fall. It’s a shame, but even space can’t survive the harsh realities of show business.

Which brings me to the goodbye portion of this post. I remember being young when Stargate SG-1 premiered on Showtime and watching the first few episodes on TV. I wasn’t an avid Stargate fan at the time and am not claiming to be one now, but that doesn’t mean that I didn’t enjoy the franchise and everything it offered while it lasted. I really dug the concept of all three shows, but I enjoyed Atlantis and SGU more, with early SG-1 thrown in for good measure. In short, it’s sad to see a franchise die out so young and hope that whoever takes the reigns of Stargate in the future connect the dots back to the original three series as they take the franchise in a new direction. It will be tough not knowing what happened to General Jack O’Neill, Samantha Carter, Dr. Rodney McKay, Daniel Jackson, Eli Wallace, and Dr. Nicholas Rush to name a few, but at least we got to know them, right?

The journey through space has reached its course for now, but will you be willing to jump back on board if and when the gate reopens?

It’s been real, folks. Until next time!