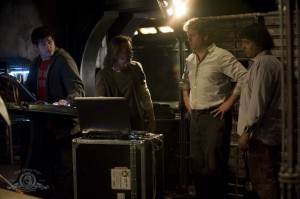 Don’t worry, fellow SGU fans, I haven’t forgotten about you guys or the show!

Due to Mondays being a complete war zone on my DVR and TV, plus my job going into the 8 o’clock hour on that night, my review was delayed. SyFy moving the show to Monday nights did not receive a big whoop from me and now you can see why. So without further adieu, let’s discuss the beginning of the end of SGU.

The return of Stargate Universe was a bittersweet experience, which possibly impaired my judgment on this week’s episode. As I stated in my review for the fall finale, this SGU story didn’t click with me at all in the grand scheme of things. The return of Telford and the seed ship was a huge plus, but I was highly left unimpressed when the cliffhanger was presented because I knew the crew would make it out in the end. After watching “Deliverance”, my attitude towards “Resurgence” still remains the same and, in some respects, solidified my original statement on the two part story as a whole.

We didn’t learn anything new during the duress on Destiny and the episodes only play as a standard crisis of a week situation. The major plot points within the two episodes are minor within the entire narrative of the series and should’ve had a better base to accommodate their importance. In short, the episodes weren’t epic in the tradition of last year’s finale or midseason finale and didn’t leave anyone talking about what could happen next. Sadly, the only thing about SGU that was mentioned during hiatus was the show’s cancellation and the ramifications that followed.

Be that as it may, the major plot points that came out of “Deliverance” were pretty notable despite being muted by all the noise around them. First up is the explosion of the seed ship, which was a shame given that since the hostility of the Ursini was designated null and void, they could’ve helped the crew get home. Despite that fact, Rush is probably happy as hell to not have to worry about that nuisance again. But he has more to worry about soon… Second, Chloe is technically not a danger anymore and finally has something to do than grope Lt. Scott when he needs it. Wonder what the B.A.G. wanted with her? Did she incidentally give them information on the Destiny? Was she just a vessel to collect information? If so, then that would be pretty wild, but I can’t ignore the issue of Rush being spared in the procedure?

Now will Chloe’s newfound knowledge (given to her by the Blue Alien Group) pit her against Eli, Rush’s other partner in science? I can see plenty happening there. Also, will Chloe be more tight lipped about Rush’s shenanigans than Eli is at the moment? Plus, I’m glad Lt. Scott admitted to his fear about Chloe’s condition and moving past that obstacle. I just wish he had of admitted while she was being transformed. I mean he did in so many ways, but he never came to terms with it. At least not in my eyes, that is. The guy has come a long way and I’m sure he’s got a lot of good things heading his way.

All in all, “Deliverance” was a good episode in SGU canon, but as a midseason premiere, I was disappointed a little. Now, the next two episodes are amazing and I will have information on those later. With that said, it makes you wish like hell that SyFy had of waited till this summer to make an announcement about SGU, because things sound like they will get even better as the show heads toward its premature conclusion.

Your thoughts? Voice them below and in the Forum!