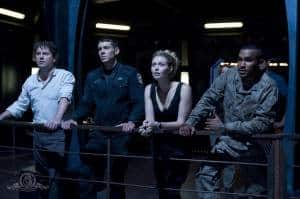 Two words about tonight’s SGU… Game. Changer. The long awaited reveal went down and my popcorn bowl was filled by the time the ringside bell sounded. Also, Simeon really worked my nerves, but it’s Robert Knepper so we knew he would be trouble in the long run…

Col. Young, TJ, Camile, and Lt. Scott all have a meeting about Ginn and her intel on the Lucian Alliance. They feel that the best way to act on this intel is to have Ginn switch with someone from SGC so she can talk to the officials back home. Col. Young okays this move. When Camile goes to inform Ginn of this development, she’s a bit amused to find Ginn a bit frazzled in her bunk with Eli’s shirt on her bed. ELI!!! Get ’em!!!

Meanwhile, the Destiny encounters another ship in their path, which cause Dr. Rush to stop the ship on his own. The ship isn’t a seeder ship and looks as if it got it’s behind handed to it in a space battle. After Col. Young berates Dr. Rush for being MIA again, the two decide to check the ship out using the space suits. Lt. Scott asks to go in Col. Young’s place, but Young assures his second in command that he’s good and promises not to leave Rush behind this time.

Eli visits Chloe and talks about feeling bad for not coming to see her as often. The two then discuss Eli’s thing with Ginn, which signifies Eli has moved on from pursuing Chloe, which can be seen as a good thing.

Rush and Young make it onto the ship and end up discovering the same pods from the seeder ship which contained the aliens and they are all open. They deduce that the aliens are dead and keep it moving. Once the two men discover how to activate the life support and other functions of the ship, it malfunctions and takes off some distance from the Destiny, leaving Rush and Young stranded. Uh oh. 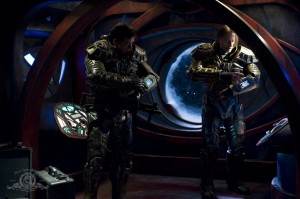 dilemma without revealing the bridge to everyone else. He comes up with a ‘viable’ solution: Call Dr. Amanda Perry to help them with the problem.

Simean stops by Ginn’s quarters to scare her into keeping her mouth shut about the attack, but is stopped by Camile, who arrives to collect Ginn to use the Communication Stones. However, this information isn’t revealed to Simeon. After Eli gives a goodbye goofy grin to Ginn, the switch takes place and Dr. Amanda Perry arrives on the ship. As soon as Dr. Perry reaches the Console Room, Dr. Rush makes a ruse for Col. Young on the stranded ship to go out of earshot and makes Eli leave Dr. Perry’s side. Once the coast is clear, Dr. Rush shows Dr. Perry some equations through the Kino feed for her to copy. Dr. Perry gets the equations and leaves the console room under the suspicion of the other scientists.

When Dr. Perry enters the corridor, she’s stopped by Simeon, who I’m seriously trying to figure out how is he walking around as freely as he is at the moment. When Dr. Perry explains she’s not Ginn and that the switch took place, Simeon doesn’t have enough time to be pissed before Greer shows up to tell the creep to keep it moving. Thank God we have Greer, people… When Dr. Perry finds the bridge, she marvels over it before Dr. Rush reveals that he has broke the master code, giving him control of the ship. He also tells Dr. Perry she’s the only one who can trust with this information. When the others search for Dr. Perry, Dr. Rush commands her not to answer them. Man, if he’s not making mistakes left and right then I will pay you; especially when Dr. Perry actually turns the Destiny around and can’t provide valid answers as to how she did such a feat.

Eli feels as if something’s up and replays the Kino tapes before the feed was dropped to see what Dr. Rush was conveying to Dr. Perry. When he writes down the same equations, Eli takes Volker and Brody to the location on the ship. When the trio finds the bridge, they are pissed… On the alien spacecraft, Young overhears the commotion through the comm feed and immediately kicks Dr. Rush’s ass for his treachery. The two have a decent smackdown for a minute with Col. Young blaming Rush for the death of Riley and other issues they ran into. Young comes to his senses after a minute and stops beating Rush into a pulp, wanting to know why the doctor held the bridge discovery a secret. Simply put, Rush didn’t trust Young, because the good colonel didn’t trust himself. Plus, Rush reveals that he overrode the Destiny’s leadership program last week, and if I am correct in my assumption, this revelation means Col. Young’s last minute stance to regain his position as leader of the Destiny was for naught in some areas, mainly by playing with his emotions/confidence.

After some cool down time, Rush breaks down what he was trying to hide, which is basically the true mission for the people aboard the Destiny. It’s not about going home, but completing the Destiny’s main objective. What could that possibly be? Well, thanks to a discussion with my editor, Jon Lachonis, here’s what Rush was getting at:

The Ancients discovered traces of a message that was transmitted at the time of the Big Bang, so it could only come from God, or technology that existed before the universe was created. This turns all concepts of the universe on their head, since time is also a byproduct of the event that created the Big Bang. He [Rush] seemed to be saying that the Ancients determined it to be some kind of technology or information that would allow the bearer to in effect manipulate the universe… Like an owners manual, I suppose.

In short, this might be the greatest discovery known to man. Now, whether or not Young believes Rush (or even cares) is a different matter until Rush declares that solving this mystery might be the only way back home. Hmmm… 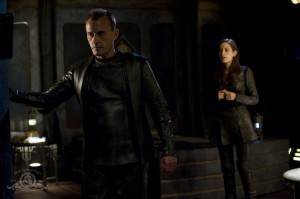 The Destiny shows up to the dilapidated ship and a harrowing rescue ensues with Rush and Young having to jump from the ship and land on the Destiny with their magnified boots. The process was a bit challenging , but the guys managed to make it back in one piece.

Once they are back, Rush meets up with Amanda and the two pick up the chemistry they had from the last time they were together. This time Rush is not backing down, until Eli shows up acting all possessive over Ginn’s body, which is kind of… scary. After snapping on Amanda for even accepting a kiss from Rush in Ginn’s skin, Eli runs to catch up with Rush, who is heading to the bridge. Too bad neither of them sees Simeon slither into Ginn/Amanda’s room… Sweet Mother in Heaven, the crap has hit the fan…

From The Bar of Brody’s Distillery

– Wow. I told you guys sparks would fly when the bridge secret would be found out, especially after Riley’s death and Telford’s desertion. I didn’t expect to know the “true” mission to be revealed so soon in the season. And what about that mission? Is it a groundbreaking goal to accomplish or is it a bit much? This scenario reminds me of how I felt about LOST when it became apparent for the castaways that getting off the island was not going to be a concrete option. With this new mission on their shoulders, will the crew of the Destiny accept their new fate? Will they learn to put “home” on the back burner for a minute to solve this mystery which could be the answer to a lot of mankind’s conundrums? I, for one, would be totally and utterly pissed if this was presented to me, even if it did mean me getting home, for two reasons with the number one reason being pretty obvious. I don’t think I could just accept the new assignment on whim without going crazy, but the second reason would be the notion of are we, the human race, ready to have access to such knowledge? To me? No. Not at all. So it would be a frivolous, precarious journey to obtain something as equally dangerous as the trip itself to retrieve it. I don’t know. Maybe I’m being a bit anxious for the crew getting home without the prospect of them never returning to be an option. Am I alone in my assumptions?

– Eli and Ginn was a nice change of pace for our boy wonder, but God did he get attached a bit quickly. The way he was acting you would’ve thought they had been dating for a few months, not a couple of days. It’s a bit much in my book, and with Ginn now dead… Umm. Just wait and see.

What are your thoughts on last night’s episode?