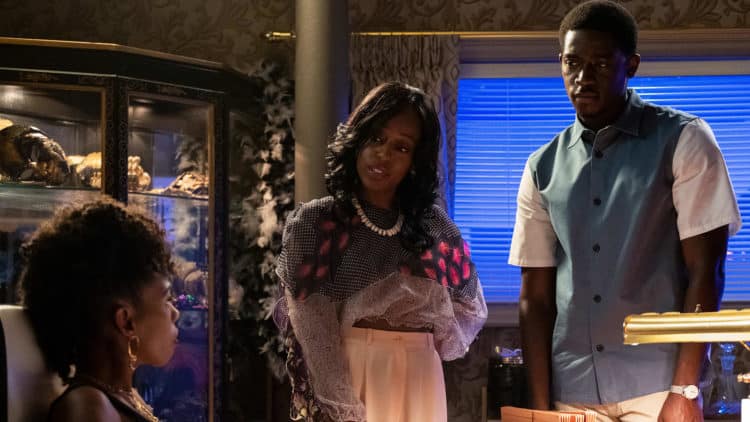 In SnowFall Season 5, Episode 1 trouble in the valley was brought to Franklin’s front door. As a result, Franklin was forced to eliminate the only partnership he had to sell his product beyond the inner city. After the death of famous Boston Celtic draftee Len Bias in 1986, President Ronald Reagan enacted a law that would punish drug dealers to the fullest extent of the law. Snowfall Season 5, Episode 2 further explores the United States government’s involvement in the drug trade in Los Angeles through the eyes of Teddy McDonald, the disgraced CIA operative that put Franklin into position. We met the lone government agent in the premiere episode of Season 1 when he had been tasked to aid in diverting money generated from the illegal drug market in Los Angeles to fund free fighters overthrowing the Nicaraguan government.

After Franklin’s father Alton, revealed Teddy’s identity on his radio show in Season 4, the agent was ousted from his operation leaving Franklin and Gustavo to work with CIA agent Grady Williamson. Grady is flashy, obnoxious, and nothing like his low-key predecessor. When Franklin appeals to Grady for a price cut on the coke the agent uses the opportunity to get to know him more. Grady agrees to lower the price if Franklin takes him flying on his plane in exchange. Watching Franklin flying a plane really allows us to see how far he came along since the days he was dealing dope out of a backpack in Season 1. Grady and Franklin conversate about their family and the women in their life.

Speaking of women, Franklin’s relationship with Veronique is flourishing. Veronique does a good job at teaching Franklin financial literacy. She brings Franklin a major legal master plan that involves moving their accounts from Panama to the U.S which will generate millions of legitimate cash. To make this move they’ll need to invest ten million dollars. Franklin and Veronique show Louie and Jermaine the business plan in hopes that they’ll buy in. However, Louie and Jermaine need a little bit more time to think it over.

Franklin visits Leon in the projects after he returns from taking the kids on a field trip to see the ocean for inspiration. There’s something different about Leon. After mistakenly killing a rival’s kid last season, he’s calmed down a lot and even hints at wanting to eventually quit the game. Leon brings up the situation with Rob and admits that he believed that Rob could have been saved especially considering that he was once one of Franklin’s good friends.  Franklin brings up the real estate development project to see if he’s interested in investing. Leon, content with his hood riches isn’t interested in the opportunity. Meanwhile, Teddy is devising a plan to get his spot back from Grady and he visits Gustavo while he’s dropping his niece and nephew off at school to inform him of his plans and make sure he has his loyalty.

Teddy rolls out the first part of his plan by disguising himself as a technician for the LA Water and Power Department and pays Grady a visit at his home. Grady is kind of suspicious of Teddy but he agrees to let him into his home and do his “job”. Teddy discovers that Grady has been pocketing money off the top of sales by altering sales and profit information. This is a significant breach that has geopolitical consequences. Teddy also learns that Grady has been engaging with assets. Grady has an intimate relationship with Black Diamond, one of the strippers that switched sides last season setting Khadijah up after Franklin offered them more money and job security. Teddy declares that Grady has “gone native” implying that he’s no different from the criminals that they work with makes him fair game.

As predicted, Grady discovers Teddy’s true identity. Teddy gives Grady twenty-four hours to resign but the agent threatens that he knows too many secrets to just go away.  As Grady prepares for bed, he takes a sip of water and begins to choke. Teddy poisoned him. As he takes his last breaths, Teddy reminds the dying agent that his stealing costs thousands of lives.

Now that he has his job back, Teddy is ready for business. He confronts Franklin about crossing the line with his contact and even sharing real estate deals. The agents also make it clear that he doesn’t plan to honor the price cut that Grady agreed to and that he has no more tolerance for loose ends. Franklin has no choice but to agree to his terms.