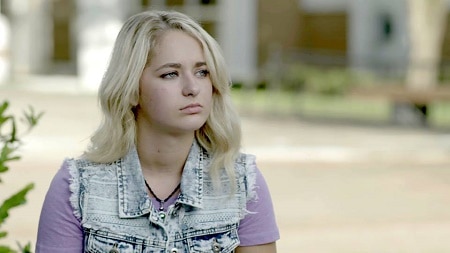 Skyler Joy has come a long way since making her on screen debut with an uncredited role in 22 Jump Street. Over the last six years, the talented young actress has proven that she has the skills to take on a wide variety of roles. She will now get the chance to share her talents with a wider audience thanks to her role in one of Starz’ new series, P-Valley. The show will tell the story of a group of strippers who work in the Mississippi Delta. Skyler’s character, Gidget, “is a second-generation pole dancer” who takes her job very seriously. Not only will the show provide a unique glimpse into life in the Mississippi Delta, it’ll also let viewers see just how talented Skyler is. Keep reading for 10 things you didn’t know about Skyler Joy.

1. She Likes To Cook

For some people cooking is nothing more than a chore that only gets down out of necessity. However, for others, cooking is a great way to relax and be creative. Skyler Joy is part of the second group and she loves spending time in the kitchen. She even enjoys sharing recipes with her followers on Instagram.

Technology has made it possible to enjoy lots of things from home, but one thing that it can’t replace is traveling. Nothing compares to getting out and seeing new places and experiencing other cultures. Skyler loves to travel and she has gotten the chance to do it often. Some of the places she’s visited include Florida, California, and Mississippi.

Skyler joined YouTube in 2010 and has become very active on the platform. She has uploaded several vlogs throughout the years which have given viewers insight into her life outside of acting. She currently has more than 2,000 subscribers and her videos have gotten a total of 99,447 views.

Skyler may not be a TikTok influencer, but she still has a pretty good sized following on the platform. Although she hasn’t been using TikTok for long, she already has 11,000 followers. Like most other TikTokers, she loves to post dance videos and comedy skits.

5. She Was Bullied As A Child

Kids can be very cruel, and unfortunately, this typically results in bullying. Skyler faced bullying at school throughout much of her childhood. It had gotten so bad at one point that she had to switch schools. Things reached a boiling point in high school after she joined the school’s dance team. The team captain bullied her relentlessly and which forced Skyler to see a therapist and graduate high school early to avoid further torment.

Lots of people believe that being in the entertainment industry makes it hard to have strong romantic relationships. But sometimes, you meet a person who makes everything worth it. That’s exactly what happened to Skyler. She is currently in a happy relationship with her boyfriend, Liam. The couple moved in together in 2019.

7. She Believes In The Power Of Manifestation

Skyler was at a low point in her life when she met Liam. However, while getting to know him, he introduced her to the idea of manifesting things. Essentially, when a person manifests something they are speaking it into existence. Over time, she grew to believe in this practice and has integrated it into her life. Judging by how things in her career are going, her manifestation seems to be working.

Skyler currently lives in Los Angeles, but she was actually born and raised in Alaska. Although there are a lot of great things about Alaska and Skyler is proud to be from there, it isn’t the best place to be for someone who is actively looking for opportunities in the entertainment industry.

Everyone has a different idea of what it means to live life to the fullest. For Skyler, it means going on adventures and taking advantage of all of the fun and exciting things life has to offer. She loves to get out and enjoy face the world head on. In 2017, she even went skydiving.

Skyler is relatively new to the TV world, but she had already built up some decent experience in the theater world. Many actors believe that starting in theater can give you a leg up if you decide to switch to film and/or TV. Skyler appeared in a few stage shows including a production of Charlie and the Chocolate Factory. In addition to acting, Skyler has some modeling experience as well.