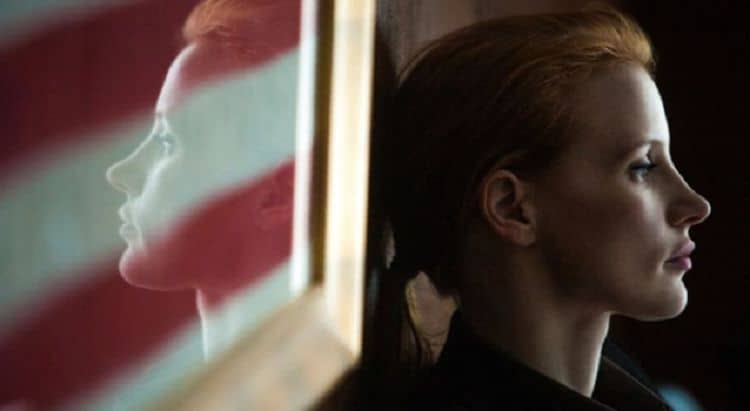 If there’s any way to control people, an award is bound to do it. We’re rewarded when we do well, which makes us want to keep doing well and earn accolades that at some point begin to mean less and less since people that continue to do well soon enough find that what they’re doing is second nature and that the same awards aren’t doing much of anything to keep them moving forward. Eventually it becomes the feeling of a job well done, a personal goal achieved, and something far more intrinsic than an award could ever give. But the Oscars are undoubtedly a way to keep actors pushing themselves and trying to outdo one another no matter that many of them might say that this isn’t what they worry about. But that gold gleam in the eyes of so many of them kind of betrays the desire to win the prestigious award, and some are of the mind that Jessica Chastain should have been called up to the podium to give an acceptance speech by now. There’s no denying that she’s a great actress and worthy of praise, but perhaps the Oscar is something that people should stop pulling for, especially since it would appear that there’s a certain percentage chance of falling under the ‘Oscar curse’, which some feel is very real, but others are positive is little more than a rumor, an urban legend that was made for one purpose or another.

Let’s put it out there and say that Jessica is a top-notch actress that has been given some stellar roles in her career, but this isn’t always enough as people have been made aware of in recent times. She’s managed to show an inordinate amount of strength in some roles and a great deal of tenderness that still feels as though it has an edge just beneath the soft surface, as though her emotional strata includes several hardened layers that don’t restrict her acting but instead enhance it. But when it comes to the hunt for the ever-elusive Oscar one can’t help but think that diversity has already snatched it from the hands of many people that might be just as or more deserving than those who are bound to be selected simply because intellectual diversity is one of the only practices that doesn’t appear to be on display when it comes to the Academy Awards. As those that are in charge of voting who wins and who goes home empty-handed have shown themselves willing to become apologists and harbingers of a new and demanding set of rules that lead to the podium, it becomes necessary to call out the hypocrisy that they’re executing. A possible acceptance speech that might in some cases sound like a plea or an apology depending on who’s accepting the award is what many people expect these days when the best thing to do would be to give thanks to a few key people, accept the award, and walk off stage.

But this is the era of virtue-signaling and calling out everything that people think is wrong with the world, and while it’s not guaranteed that Jessica might not do the same, it’s reasonable to assume that her trip to the podium might be a little longer if only because of her skin tone and because the diversity rules that govern the Academy Awards have become a bit nutty in recent times. There’s no other way to say it but to admit that the Oscar is kind of worthless at this point, despite the fact that it’s become an institution that people will continue to defend and continue to seek out. Talking about such ideals as the right person that deserves the award, the right person that put forth the effort to win this accolade, and the fact that diversity is beginning to be a clarion call of the ‘righteous’ and ‘woke’ isn’t fully to blame when it comes to the Oscars, since the awards show has been declining steadily over the years and has become less of a spectacle as it used to be and more or less just another awards ceremony in a country that has so many of them that it’s hard to keep track. Should Jessica Chastain be granted an Oscar? Does she deserve it? Is she worthy? That’s kind of up to each person to decide, but the fact of the matter is that she is a very skilled actress and likely would be a fine addition to the many winners that have come before her. In fact, she might even be someone that a lot of people could agree would be more deserving than a few people that have made their way up to the podium in recent years. But again, that’s a personal choice