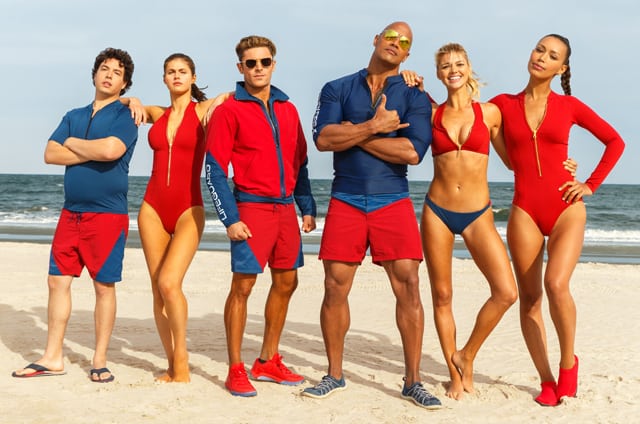 Hollywood’s obsession with remakes/reboots/sequels saw Paramount Pictures try to revive the once popular Baywatch franchise for a new generation. Spawning eleven seasons from 1989 to 2001, the original Baywatch made stars out of David Hasselhoff and Pamela Anderson, and had one generation being entertained by the cheesy lifeguard show that had an unforgettable amount of charm. The 2017 reboot was a rated-R affair featuring Dwayne Johnson (The Rundown, Hobbs & Shaw), Zac Efron (The Greatest Showman, The Disaster Artist), and Alexandra Daddario (San Andreas, Texas Chainsaw), which saw Mitch Buchannon and his band of hot misfits try to stop a wave of crimes that hits their popular beach. Upon release, Baywatch was trashed by critics, garnering an abysmal 17% on rotten tomatoes. As movies like the Transformers franchise have showcased, a bad rating doesn’t always equal box office failure; however, Baywatch opened with nearly $19 million and only amassed $58 million worldwide. The summer film failed to recoup back its $69 million production budget. So, what happened? Baywatch was based off a well-known property and features one of the top A-list stars in movies today, Dwayne Johnson. Let’s dig deeper into the reasoning behind the box office bomb known as Baywatch.

The Source Material Wasn’t That Great

It’s true that Baywatch was a highly popular series during its initial run; however, it’s definitely not because of its compelling storyline and engrossing characters. Baywatch was a cheesy series about hot lifeguards who had the ability to run in slow motion. There isn’t much material to grab from the original series. The movie showcases a lot of muscles and tits, but it tries to be something that it’s not. Granted, the reboot barely takes itself seriously. The movie knows that its dumb and runs with that notion, though the level of success depends on your enjoyment of low-class vulgar humor, crazy number of male and female nudity, and the outright absurdity of the film entirely. Is it possible to make a good Baywatch movie? Yes, and to some degree, the 2017 reboot shows flashes of brilliance, namely Dwayne Johnson and Zack Effron one upping each other through various competitions. Baywatch fits in the dumb fun category, which is probably the wrong target audience for this feature. As I previously stated, Baywatch was nothing more than a cheesy show about hot lifeguards, and with the filmmakers trying to gain the attention of the original fans, the tone and feel of the movie just doesn’t match the original. Since it greatly deviates from its source material, it likely turned off older fans; With the brand being an unknown property to most people in the new generation, it clearly didn’t catch the attention of most audiences even if they were just looking for a dumb summer movie.

As I mentioned in the paragraph above, the source material didn’t match the 2017 reboot’s tone and feel so original fans were likely turned off by the rated-R nature of the film. Surprisingly, Baywatch feels at war with the type of film it wants to be. It’s clearly trying to capture the attention of young audiences thanks to the popular name of stars attached and the overall sex appeal of the film. The movie also has the spirit of what the young demographic typically likes, a raunchy comedy akin to The Hangover or Wedding Crashers; however, it turns into this serious crime feature anytime they focus on the drug ring subplot. Plus, the various winks at the original Baywatch makes the reboot a mess that doesn’t even understand what it’s trying to do. Had Baywatch stuck to its dumb fun roots then this film would’ve likely been better quality wise, as the 2017 movie is at its best when it takes that route. There’s no guarantee that their financial run would’ve been better as the audience score is a solid 66% on rotten tomatoes; however, a better word-of-mouth about the Dwayne Johnson feature would’ve surely helped gain some more interest in a property that the new generation isn’t all too familiar with.

The Box Office Was Too Crowded

This reason is a regular occurrence for most box office bombs but Baywatch had to compete against Pirates of the Caribbean: Dead Men Tell No Tales, Guardians of the Galaxy Vol. 2, and Alien: Covenant, established franchises that are generally well liked by mainstream audiences. Combine the fact that Wonder Woman was opening on the following weekend and Baywatch simply had no shot to begin with. Baywatch could’ve been a summer surprise like The Hangover; however, the terrible critical reception negated the interest in most audiences. With better options playing in theaters, why shell out money for a lackluster film.