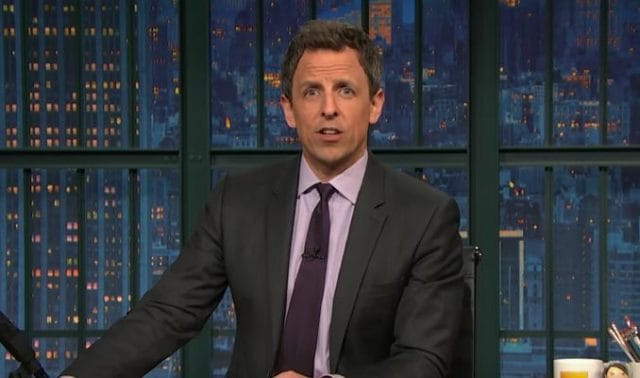 When you’ve had your fill of Donald Trump jokes after watching Stephen Colbert, there are always going to be more waiting for you on Late Night with Seth Meyers.  The “later” late night talk show host went right after the President by reviewing week 2 of the administration.   Seth takes a closer look at the confusion surrounding President Trump’s controversial travel ban and his bizarre calls with foreign leaders.  He also brought up the infamous Frederick Douglass quote where Trump clearly thought that the influential African American was still alive.

While Stephen Colbert had to adjust his The Colbert Report and Daily Show personas to become a successful late night host, Seth Meyers really hasn’t had to stray much from his Weekend Update on Saturday Night Live role.  I personally think that Meyers is still somewhat stiff when it comes to interviewing people live, but clearly he’s got monologues and “reporting” down cold.  While I don’t think that Meyers is as polished as he will eventually be, he’s a great alternative to Colbert if you happen to still be awake.

In any event, I think Meyers pretty much nails everything that went on with Donald Trump in week 2 and Meyers is certainly holding nothing back here.