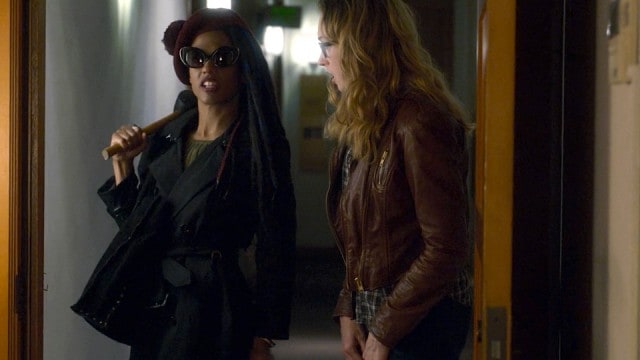 “W.W.N. Double D?” never disguises itself as a bridge between more important moments and stories of Sense8. Most of the hour is spent in deep conversation between two characters, further deepening the metaphorical connections between sensates as the larger stories build in the background. As a filler episode, however, “WWN” is surprisingly poignant, both in the enlightening moments when sensates directly communicate with each other, and when the episode turns towards more plot-focused moments, a rather impressive feat for a show juggling so many characters and narratives at once.

The most prominent theme of the episode is characters taking the fall for others: the idea of sacrifice is one embedded in “WWN Double D?”, most obviously in Nomi and Sun, two women who both have spent time incarcerated for the mistakes of others. In fact, the most haunting moment of the entire episode comes from this idea, when each of Sun’s cellmates notes how they are women who took the fall, in one way or another, for the behavior of the men in their lives. We don’t know if Nomi’s incarceration came along the same lines of course, but the thematic relevance of their situations past and present are important. It’s an idea that leaks its way out into nearly every scene of the episode, shifting to smaller characters as the hour progresses. Be it Capheus’s predecessor, Wolfgang’s friend Felix, or Dr. Metzger dying to protect whatever Dr. Matheson is up to, any character whose story is directly tied to the main plot of “WWN” embodies this idea of sacrifice in some form (and given the very brief image of Angelica Will has in the back of the empty van he’s searching, suggesting she died as a sacrifice to others, as well).

That undercurrent is pretty subtle once the connection between Sun and Nomi is made, but it remains, and frames the other events of the episode in intriguing light. Will Amanita end up paying the price for Nomi’s freedom? Is there anything Daniela or Hernando can do to save Lito’s career, given the explicit pictures (that Daniela took, for unknown reasons) that are about to make their way to the public? The thematic work of “WWN” raises a number of interesting questions, and help keep the episode moving where many other narratives would typically stutter, and struggle to maintain momentum.

The only real outliers when it comes to the deeper ideas of the episode are Riley, Will, and Kala – and their stories are plenty interesting on their own to keep up with the rest of “WWN” (which pulls its title from a hilarious interaction between Nomi and Amanita — they are as adorable as sleuths as they are a couple). Kala’s conversation with Wolfgang will best be remembered for the magnificent sexual tension between the two, but it also pokes audiences with the idea of science and faith being one and the same, rather than two completely dichotomous ideas. That’s a fascinating idea, one that raises a lot of interesting debates about the nature of culture and language, and another moment where Sense8 poses its most important observation of all: stripped away of language barriers and cultural predispositions, the emotions and experiences we share are nearly identical — which means that two opposing views are two sides of a coin, rather than two different objects altogether.

Tie that into the show’s infinity logo (which is a tattoo on Riley’s neck: something I had never noticed before this episode), and the pathos of this hour becomes neatly aligned in near-poetic fashion. Sense8‘s ideas about human connection and identity are always intriguing — but it’s the compassion and open desire for global unity that really separates this show from anything else on television. It’s a show with immense hope for the future of humanity and the world becoming one united civilization, while understanding the individual sacrifices such an endeavor requires, and how inherently impossible something like that would be. But we can always hope — after all, if we could all speak the same language, we’d understand we’re all going through the same struggles together, our journeys through life separated only by what surrounds, and thus defines, us as humans. That’s a sentiment I can get behind, and one not enough television shows truly embrace.