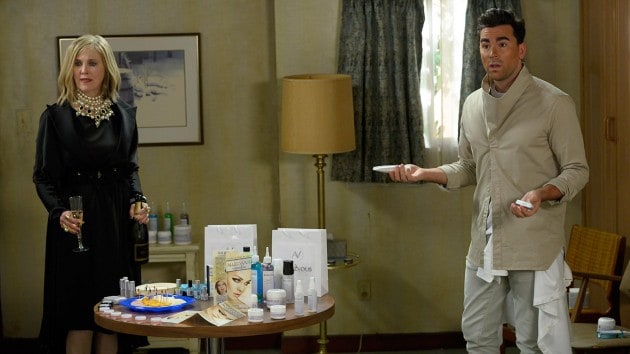 “Allez-Vous” feels more like the first four episodes of Schitt’s Creek than the last four, telling slight stories about a backwards family trying to make it in a doubly-backwards town, without a whole lot of connective tissue between it all. That means “Allez-Vous” has to rely on its comedic delivery for its stories to work – and they do, which saves the hour from being a complete toss-away.

It helps that this episode pairs off its characters smartly in its two main stories; Roland and Johnny are easy ciphers of conflict with each other, evident just by looking at how the two present themselves to the world. On the flip side, David and Moira make an equally wonderful comedic pair, but not because of any conflict that dredges up between the two: what makes them hilarious is how equally deluded they are about themselves and the titular Avon-like product Moira’s old “friend” ships her as a veiled insult.

The latter pair is really the magic of the episode: watching the two of them try to stage a party for a product everyone in the town already failed at selling (including the mayor and his wife) is pure bliss, highlighted by Moira’s strained smile and David’s horribly bronzed face and ridiculous get up. Their sales pitch is so transparent and desperate, you can feel their audience cringe along with us at home; it’s horribly awkward to watch them go through their clearly-scripted lines, only getting funnier when Alexis walks in and pokes fun at their horribly failing business strategy.

However, there’s really no resolution to their story – and what interesting material is drawn from their “teamwork” in this episode is left untouched among the rubble of the car Johnny tries to steal/borrow for an extended amount of time to go get unemployment insurance (pointing out a very forgotten fact that self-employed people do not qualify for unemployment insurance, as well as just about anything with the word “insurance” attached to it), which is the real centerpiece of the episode, and one left equally untended.

While Johnny’s misadventure out to Elmdale is plenty amusing on its own, there was an opportunity for Schitt’s to tap into some of that underlying darkness we saw a few episodes earlier with Moira’s failed commercial. Johnny’s financial plight is much simpler than Moira’s professional one, yes, but that simplicity almost suggests a certain complicity, that Johnny’s approach to the world and life was inevitably going to lead him to failure. It’s what his constant struggles to make his meeting (or even understand the nature of it) appear to symbolize, but Schitt’s never digs its teeth into this idea, missing out on a fine opportunity to carve some personality into its lead character.

At least we get some quality Johnny/Roland time out of the deal: their inability to actually hold a conversation with each other is always ripe for laughable moments – in very Seinfeld-ish ways, those two have a way of talking to each other about themselves, ignoring what the other said completely, and that’s always amusing in the hands of two talented comedic actors. But their quipping is like Alexis and Ted’s: it doesn’t really mean much, the kind of conflict that really just exists for the sake of having it. When it gets down to business, Roland is a good guy and Alexis is way too picky and superficial: these things are already known, and “Allez-Vous” doesn’t expound on these ideas in any interesting ways.

For an episode existing in stasis, though, “Allez-Vous” is not bad – it’s not just not quite up to par with what the show’s offered in recent weeks, foregoing its deeper explorations for a simpler, more direct storytelling approach, the production equivalent of “taking a breather.” At that, this week’s episode of Schitt’s Creek is solid, if insignificant, a good half hour of holding pattern while waiting to to dig back into its larger stories and explorations.