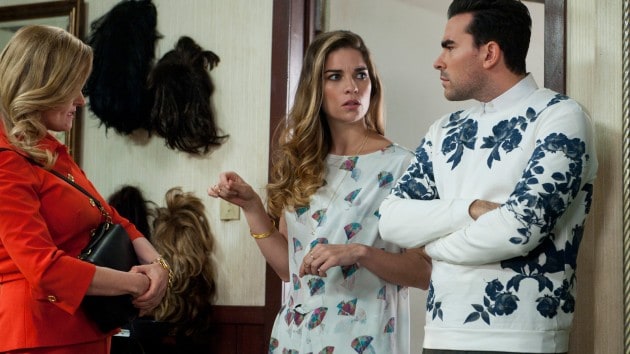 In last week’s review, I noted that Schitt’s Creek appeared to be reaching deeper with its stories in recent episodes – that trend continued in this week’s installment, which isn’t nearly as funny as the show’s greatest hours, but arguably stands as the show’s most emotionally effective half hour to this point. There’s something affecting about the humility each member of the Rose family experiences in “Little Sister” that elevates it above other episodes – it’s missing the slapstick presence of the Schitt family (save for Mutt, but he’s not a funny type), but it’s definitively a better episode for it.

How the central theme of “Little Sister” embeds itself in each of the episode’s stories is interesting: they’re really quite isolated stories (Moira and Johnny spend the episode together, mostly separated from their children except for the opening scene), but “Little Sister” uses this separation to bring the family together emotionally, each of them experiencing moments that force them to swallow their pride in much more meaningful ways than “disgraced formerly rich family moves to Rednecksville.” The best of these, oddly enough, comes from Alexis: to this point, she hasn’t exactly been the show’s most nuanced character, her superficiality played up for easy laughs. Annie Murphy’s really done a fantastic job making what could be an annoying character a fairly empathetic one, and “Little Sister” is the beneficiary of this performance: instead of Alexis’ hesitation to actually provide any useful information to Twila or Mutt feeling manipulative or definitive, “Little Sister” throws a little twist by pushing Twila to talk to her boyfriend about the chasm in their relationship. Granted, this is a self-serving move at the end of the day (just like Moira’s feigned affection towards her sister), but it feels so grounded in a character trying less to rock the boat, and more like a woman trying to turn a devastating trainwreck into a minor fender bender, if you will.

It works so well, in fact, it outshines the titular story of the show, and paves the way for the other Rose child to steal the episode out of nowhere, with a story designed around forcing David and Stevie to deal with their current situation without ruining the show’s normal tenor. Schitt’s Creek couldn’t let David’s behavior continue for the entirety of the episode: not only does it make his character insufferable, but it heightens the “drama” of the story to levels that Schitt‘s is just not trying to achieve. Two smart curveballs help avoid this: David getting dressed down by a miniature version of himself (right down to the hand motions), and Stevie getting stood up on her date. Those “swallow your pride” moments for both characters helps catalyze them deciding to be friends and avoiding the inherent complications of friends with benefits, and even contain a moving, genuine scene in which David admits to Stevie that having a friend is more important to him right now, because Stevie’s the only person keeping him sane in the whole town.

That moment is strong, and one “Little Sister” can’t quite match with Moira and Johnny, who are thrown into a tailspin when Moira’s sister DeeDee – who the family once lent/gave $50,000 to, depending on who you ask – shows up to gloat about their current situation (we also learn the Roses were once worth $500 million. Damn, homie!). Their story is more built on the closing moment, the irony of her leaving them with a $500 check on her way out of town, rather than the humbling path Moira takes to ask her sister for help. There are touches of it, but most of it is fed to Moira through Johnny, and this robs Moira’s character of important agency, thus leaving a slight disconnect between the emotional thematic foundations of “Little Sister”and how their story plays out through the episode.

Regardless, the symbiotic nature of all three plots is something Schitt‘s Creek hasn’t openly aspired to, at least to this point, and as the show heads into the final few episodes of its first season, it’s beginning to morph into a series that’s something a little more than the sum of its parts. There’s a certain existential exploration of the two generations of the Rose family that is slowly rising to the surface in the back third of this first season, and after another expertly-constructed episode like “Little Sister,” I’m excited for where Schitt’s Creek might go in its final two half-hours of 2015.