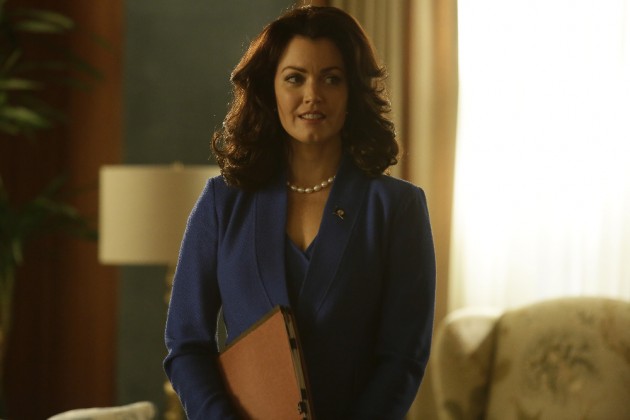 The Scandal Season 4 finale, “You Can’t Take Command,” opens right where the previous episode left off. Mellie is chatting with Papa Pope, who is impersonating Damascus Bainbridge, a bogus filthy rich contributor to her senatorial campaign. Unaware of how deep into lion’s den she is, the First Lady graciously smiles at the man when he suggests that she take a look at the folder he hands her, but Mellie’s smile dissolves as she encounters revealing pictures of her shenanigans with her former flame and vice president, Andrew. As if that wasn’t enough, there is also an enclosed file regarding Operation Remington, and how Fitz is intimately tied to it. In exchange for not making the documents public knowledge, Rowan demands the First Lady materializes a list of names for him, a task she promptly performs.

In the meantime, right before Jake gives his testimony regarding B613, Olivia encourages him to come clean about everything, no matter who gets hurt, and yes, she is referring to none other than Fitz. Then, D.C.’s most gifted fixer proceeds to call Fitz and congratulates him on his role in taking Mellie to the Senate. At this point in the game, everyone is calling it: Mellie is winning. For the first time in a long while, it sure looked like two end game couples were being defined: Fitz and Mellie and Liv and Jake; however, that sense is exactly what caused me to doubt. Scandal‘s writers have always set a solid ground, only to then crumble it soon after. Something bad was going to happen to the Fitz-Mellie-Jake-Olivia love rectangle in this season finale.

As Jake and David exit the courtroom, victory is in the air, Ballard’s testimony was a hit; however, the hopes for justice don’t linger. As it turns out, the vehicle that was transporting all 16 jurors was penetrated by a cold-blooded assassin who terminated everyone’s lives. Additionally, the stenographer who was in court but not in the bus also perishes in a “hit and run.” Once again, the writing on the wall turns into a neon sign: “You do not mess with Rowan Pope.” B613 can’t be fought. Justice will never be served as bodies keep piling up. Even David Rosen has now decided that it is time to surrender and be thankful that he’s still alive.

Olivia has no cards to play. Rowan has the upper hand, and therefore, she decides to see the only person who has outsmarted him: Maya Pope. After calling her own daughter conceited, Mama Pope enlightens Liv by telling her that no one knows Daddy Dearest exists, and that’s something Liv should change. The suggestion is so simple that it’s brilliant.

In the meantime, a guilt-stricken Mellie confides in Cyrus the role she played in the demise of jurors, and the Chief of Staff decides to handle the situation, while Liz, who provided Mellie the list, once again proves how loyal she is to her by letting Mellie know that she is fine with what happened and will take her to victory. It’s essentially become a rule on Scandal: secrets strengthen key bonds.

Later on, as Maya suggested, Olivia and Jake talk to the director of the CIA in hopes to expose Rowan and B613, and they bring the boxes filled with evidence. As he sees the materials, Director Lowry asks the duo to sit and wait. The woman then meets with Cyrus, who gives her a compelling warning. Afterwards, Liv and Jake are completely blindsided as their phones are taken away, and they are locked up in cells.

After having paid a visit to Rowan, Cyrus meets with David and tells him that if he doesn’t stop chasing after B613, Abby, his Kryptonite, might meet those dead jurors soon. Since it is clear that Beene does not make idle threats, David pays a visit to Liv and Jake, who are still jailed, and gives them an affidavit and an ultimatum. They can sign and state that they were lying about B613 and regain their freedom, or they can face treason charges. Both of them do what any other person in the world would and sign.

While all points signing that Rowan has won, he decides to twist the knife just for kicks and calls his daughter. He informs her that B613 is no more, only not the way she intended it to. Every single agent has been executed and the files were burned, while Maya was released from prison by signing the same document that Jake and Liv did. Now Papa Pope is the only member alive, and holding all the cards, even worse, he gets to be Eli Pope. The development is genius.

In parallel, Mellie wins the election, and while she is giving her first official speech as the Virginia Senator, Liz lets it slip (in a very suspicious way) that the First Lady was the one providing Papa Pope with the hit list. Fitz poses with his wife as patriotic balloons rain over them, and that might be the last happy image we get to see of the marriage. Later on, at the Oval Office, Fitz tells Mellie that he is privy to her involvement in the deaths and asks her to move out. They are over. As much as one can understand how Fitz feels, he was being hypocritical. He might be the President of the United States, but he went to war for Liv, with Mellie’s support, and then he kicks her out because she felt trapped and made a fatal mistake? Mr. President, sometimes you forget the rules of politics.

After throwing his tantrum with his wife, Fitz gives Cyrus a piece of his mind as well by telling him that he knows Mellie asked him for help. He then fires the Chief of Staff and gives the tittle to none other than Liz. I am still rolling my eyes.

In the meantime, at the OPA premises, Olivia breaks the news to her team about B613 having been exterminated by the head of the snake itself, which prompts Quinn to remind everyone about the billions that Huck had taken from the black organization. In a quick turn of events, those bills migrate, and voila, Daddy Dearest is arrested for embezzling money from the Smithsonian. It’s poetic that Rowan is taken into custody for the one thing he didn’t do. According to records, he is a white collar criminal instead of the king of terror.

Back at OPA, Quinn questions Huck. She has seen the bodies of the jurors at the morgue and has recognized Huck’s modus operandi. In spite of Huck admitting that he had to follow orders to protect his family, Quinn says he is just blood-thirsty and will never be able to be with anyone. He has a gun to his head, and the person who has always defended him has grown weary and disappointed; he asks her to pull the trigger.

While Huck’s story ends on a suspenseful note, Olivia and Ballard arrive to her apartment, where Jake refuses to get in and announces that he has fulfilled his duty. He reminds her that he is in love with her but knows she wants Fitz. Unwilling to have his dignity walked all over, Jake walks out. The other two sides of the love rectangle fall down.

Back at the White House, Fitz is surprised to find Liv at the balcony waiting for him. There is a kiss, and there is promise again.

Families are complicated. Olivia’s two dads (Rowan and Cyrus) betrayed her in this episode, while her “brother” Huck also went behind her back and her mom toyed with her once again. As a whole, the concept worked very well, however, the finale missed a few notes. To begin with, Jake and Olivia’s arc was weak this season; there was a Russel intermission, the return of “sweet baby,” and then he just leaves? I agree with the departure, but the way it happened felt very unfinished. Then there were the Gladiators, who were treated like assistants throughout the finale, and Liz inexplicably became Fitz’s right hand.

My biggest problem with the episode, and probably with the whole season, is that even in the most solid episodes, which we had many of, Fitz feels more like an obstacle than a character that we want to root for. He has not done anything memorable for the country; he went to war, gave the cold shoulder to a rape survivor, and then pushed away the people who were trying to clean up his messes. No matter how questionable their methods, they were trying to protect him. I certainly did not enjoy Season 4 Fitz, yet I look forward to see if we can re-fall in love with him next season.