Home
Television
YOU
Joe Goldberg Is A Love Addict: Here’s How 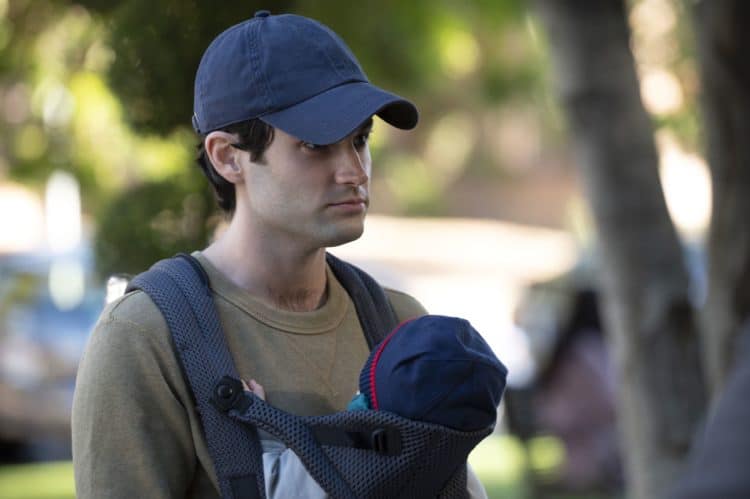 Behind the dark brown hair and the boyish nerd facade, lies a stalker and psychopathic serial killer. To be fair, Joe Goldberg portrayed by Penn Badgley isn’t your typical serial killer at least if you let him tell it. Joe believes he’s a white knight in shining armor that protects women who he deems as vulnerable. But the truth is, he’s a coward that can’t take rejection. As the series progresses, we learn more about why Joe is obsessed with the idea of love and why he uses violence to avoid the fate of his romantic endeavors. In Season 1 of You, we find out that Joe was orphaned at a fairly young age. Joe’s biological mother Sandy was abused by his father. Joe himself was often neglected as a child and even physically abused as a child. When Joe, shot and killed his abusive father one night, his mom turned him over to Child Protective Services and told them that she wasn’t fit to care for him. As a result, Joe was sent to live in New York State Irving Group Home.

Joe spent several years in the foster system. Eventually, he was adopted by Mr. Mooney a bookstore owner. Mr. Mooney took care of Joe and even gave him a job at the bookstore. We also learn in the first season that Mr. Mooney was just as cruel and abusive towards Joe as a child. Mr. Mooney would lock Joe up in a plexiglass cage for weeks at a time. Sometimes he wouldn’t even feed him. Joe has endured a lot of trauma while growing up. This is one of the reasons why he develops a bond with Paco a young boy and his next-door neighbor in Season 1. Paco’s mom was in an abusive relationship and Paco often suffered because of it. In Season 1, Joe kills the abusive boyfriend for Paco’s sake. It’s no secret that Joe has an unhealthy obsession with love. His need to be loved and adored by the women he pursues and the way he seeks to isolate them from their friends and other parts of their life is due to an underlying love addiction according to experts. Joe is almost always willing to manipulate events to get the love and trust that he desires from his love interests. For instance, in Season 1, Joe goes as far as to kill Beck’s best friend Peach when she invites Beck on a weekend trip. Joe believes that Peach wants to take Beck away from him so to have her all to himself he murders her and stages her death to look like a suicide.  He even becomes suspicious of Beck’s therapist, Dr. Nicky.

But like most love addicts, Joe had a complicated relationship with his mother. In Season 3, during a flashback, we learn that at one point, Joe finds his mother and discovers that she is married and went on to start a new family. This was a quite hurtful experience for Joe. In reality, Joe is hungry for that unconditional love that he never got from his mother. He also has abandonment issues which stem from his mother leaving him in foster care and never coming back to get him. In Season 3, Joe’s a married man with a child. You would think after suffering such trauma in his early life that Joe would be happy to finally have a family of his own but he feels suffocated. Joe is disappointed to learn that the baby girl he thought he and his wife were having is a boy. Joe insists that he knows how to deal with women best and fears that he won’t be able to develop a bond with his son. In a way, Joe was likely hoping to get the unconditional love he always sought from his daughter especially since he can’t stand his wife, Love.

Love and Joe have several similarities. Love’s tendency to protect her loved ones at all costs even to the point of murder is what drew her to Joe. Joe sees a lot of himself in Love which is why we slowly see him develop a strong hatred for her in Season 3, reinforcing the harsh truth that love addicts don’t actually want love in a real way because they aren’t capable of having a mutually loving dynamic. Love addicts are attracted to the highs of falling in love. Once that high is over, most of the time they are back aimlessly searching to recreate that feeling. That explains how Joe manages to so call fall in love with two women in Season 4. For Joe, his marriage is no longer exciting which leads him to stalk and become obsessed with Natalie the next-door neighbor. After Love kills Natalie in a jealous rage he falls for Marianne. The sad truth is, Joe is a love addict that struggles to understand the reality of his love life and how his addiction impacts the women he falls for. Although love addiction is underrepresented in entertainment this mental disorder is quite common.