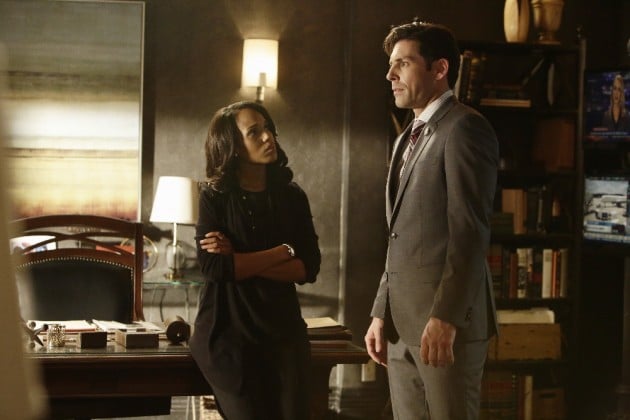 This week’s episode of Scandal distances itself extensively from the previous installment, where love stories took precedent, and instead goes back to crisis management and high stakes as David continues his mission to bring down B613.

Oftentimes, good boy Jake refuses to be involved with David and Co.’s operation and offers convincing arguments to do so. He embodies B613, he has led, and, therefore, he has the authority to decide against pursuing Rosen’s initiative and risking his life and others in the process. In parallel, it’s 100% understandable why Abby’s ex and the Gladiators, plus Charlie, wish to become the Avengers. And their intent is noble, albeit suicidal.

With Ballard out of the equation, David, Quinn, Huck, and Charlie track down former BC13 agents (do they all remain on U.S. soil?) and offer them immunity in exchange for their testimony. The problem at hand is that Quinn and Huck have to leave Charlie as the sole guardian of the professional killers in order to help Olivia on their new case. Aside from that, Jake has bugged Rosen’s office and is privy to the status of the operation.  As a side note, I thoroughly enjoy this version of Olivia’s former love. This is the guy who ran to the streets unarmed in his underwear to save the crisis manager (an image no one will ever be able to erase from their retina); he KNOWS what he is doing, and his expertise goes further than making lovey eyes to the aforementioned heroine. When it feels like his ability is taken for granted and even downplayed, Jake reminds everyone why he is good at what he does. He is also a few steps ahead of a team that outnumbers him.

In parallel, the case of the week revolves around a family tragedy that turns into cold blooded murder and pending execution of Congressman Nicolas Reed’s father. Long story short, Reed’s mother died when he was young, and his dad has been on death row  for 15 years, after confessing to ending the life of Dan Hoffman. The Congress member explains to Liv that he believes that his father is innocent, in spite of his confession, and adds that Hoffman used to be his sister’s high school teacher, who also developed a romantic relationship with her. Reed emphasizes that Jamie, the teenager, was young and fell in love, and as a result, when the educator broke her heart, she committed suicide. Papa Reed was the one who found her dead body hanging from her closet’s door.

Olivia fails to see how she can help the tragedy-stricken family; after all, there was never an investigation, since George, Reed’s father, gave a confession before an investigation took place. Despite that fact, the Congressman, who had fought his entire career to free his dad, begs she meets with the incarcerated man. Olivia agrees, and when she finally speaks with him, she immediately believes in his innocence.

Meanwhile, the  First Lady is covering her bases by having Lizzie doing control damage. As it turns out, Mellie and her half sister, Harmony (Harmony and Melody! Nice job writers!), have a rocky relationship, which, as Elizabeth and pretty much everyone, correctly assesses, could potentially hurt the FLOTUS’s campaign going forward. Harmony harbors resentment towards Mellie, while she also knows too many intimate details about her sister, which could potentially end up in the press. As a result, campaign manager Elizabeth insists her boss to try to repair her relationship with her sister.

Everyone in the White House anticipates that Hurricane Melody’s arrival will end up in disaster, a thought that Cyrus enjoys with a sick, yet endearing glee. While he waits to see how Mellie’s campaign will implode, Fitz tries to play nice and is dragged to have dinner with his sister-in-law and his wife, who basically behave as teenagers when they are in close proximity. After Mellie calls her flesh and blood a “homewrecking whore,” the blonde tells her that she could do a lot of damage by speaking to the media.  There is no way around it; Harmony has the upper hand. The First Lady feels defeated because sibling rivalry is too much for her to handle. Furthermore, she is disappointed that Fitz was useless to her, and she is right. Mellie has been graceful about his relationship with Olivia (as of lately, anyways), and he couldn’t break up a fight? Mr. President, you owe your wife.

Back to the spy games, Charlie, who had done grocery shopping for the agents he was supposed to guard, goes back to the safe house only to be greeted by a bloody mess. He also finds Jake is there, and the men have a physical fight that allows Jake to escape. Once Huck, Quinn, and David get on the scene, Charlie announces that Jake has gone off the reservation and suggests they neutralize the threat he has now become. Huck is on board with the idea, without blinking, but Quinn tries to reason that Jake did everything he could to save Olivia when she was kidnapped.  As neatly as the conflict is set, my question was how only one person could eliminate three agents at once. It doesn’t seem plausible. Not even for Ballard.

Huck triangulates Jake’s whereabouts, and he and Quinn find that the rogue agent is at Olivia’s place. However, when they knock on their boss’s door, they see that she is having a playdate with  Russell. As a side note to that fact, I would point out that Russel and Olivia do not know how hot one night stands work. In addition, I found the notion of her believing that the man could be fooled regarding her identity laughable. She is THE Olivia Pope; she had been kidnapped recently and her face had been everywhere. At this point, she should be aware that she could never be anonymous. Sorry Liv, but you are a high profile character.

Olivia gets rid of Huck and Quinn fast, and as her door closes, Jake reveals himself by opening the door from what used to be Lois’s apartment. Ballard makes it clear to the gladiators that Liv’s well-being is in his hands. To that I must add that it is a tad strange that the man is babysitting his ex while she is with another man.

Later on, Huck, Quinn, Charlie, and David meet in front of the Lincoln Memorial, where they lick their wounded egos. They acknowledge that there is nothing they can do to bring down B613; Jake has outsmarted them. However, David is reluctant to give up and tries his best to give everyone a pep talk, which does not work. As a result, Charlie decides to go his own way (No!!!!!), while Huck and Quinn decide to move on. David sits alone at the monument, looking like someone dropped his iPhone into the toilet.

Back at the White House, Fitz finally decides to become useful and has a heart to heart with Harmony. He explains the woman that Mellie treats her with disdain because she is jealous of her sister’s life. His words seem to sink in as the First Lady’s sis ends up hugging her sibling goodbye. I appreciated the fact that the peace declaration between Mellie and her sister was not overdone.

In the meantime, Huck and Quinn pay a visit to Dan’s Hoffman’s wife and learn that the woman has passed away. Since they are trying to see if Hoffman could have been involved in the teacher’s death, they break into the empty residence and find an old smoking gun. They leave an anonymous tip for the police to make the discovery and run a ballistics exam on it. The super speedy tests reveal that that was in fact the murder weapon. However, Olivia thinks her team’s luck is too good to be true. She goes back to prison to see George and tells the man that she is not a fool: she knows the gun has been placed there. She also admits that she is sure that Papa Reed is not behind the crime and pleads for him to let the real offender, his son, confess. She makes excellent arguments, reminding the incarcerated individual that the Congressman is not a free man since his guilt has been his own prison. In the end, George agrees to let Nicholas confess. He becomes a free man, while his son resigns his position and faces the music. The conclusion is bittersweet and slightly rushed, but it fits.

Lonely David, in the meantime, realizes that he can still bring B613 down by becoming a witness himself. The catch is that he explains that over the phone to Huck, so Jake hears everything. As Rosen and his aid, Molly, walk to his car, Jake pulls a gun on the duo, and just when David thinks his forehead is about to welcome a bullet in, he realizes that Molly has a gun too. In a twist that I admit I couldn’t see coming, the woman is B613 and was also the one who killed everyone at the safe house. Somehow, Molly was able to eliminate the three skilled killers all by herself, but Jake proves to be more lethal than her and shoots her. David Rosen gets to live another day.

After a long day and a case that, in more ways that one, had to hit home with her, given her own dark story with her father, Olivia opens her door and is confronted by a huge surprise: the new men in her life is staring at her, right next to Rowan Pope.

This episode of Scandal had a nice pace to it, and a lot of arcs to cover. While some worked better than others, the final product was a dynamic hour with a little bit of everything. Scandal, once again, hits the target.

– The fact that Olivia knew about Jake’s activities was a good touch. It served as a good reminder that the crisis manager is always two steps ahead from everyone else, except for her father, that is.

– Ballard going full on Jason Bourne is the best version of Jake the audience has been given.

– Charlie has always been an asset to the show. It is very enjoyable to see the man change hats and roles.